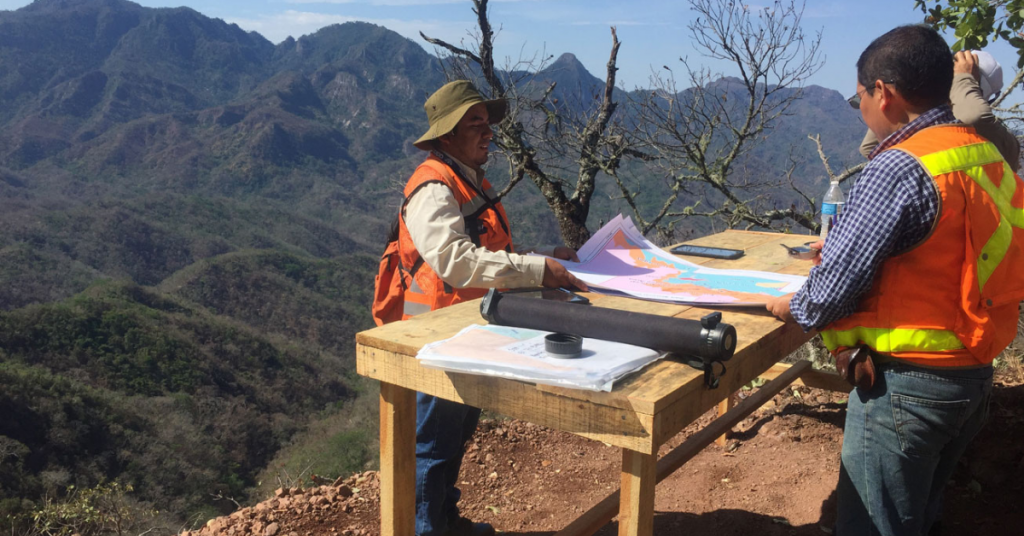 Vancouver, BC – GR Silver Mining Ltd. (TSXV: GRSL, FRANKFURT: GPE, OTCQB: GRSLF) (“GR Silver Mining” or the “Company”) – is pleased to announce the first ever ground geophysical program on the San Marcial Project, located in Sinaloa, Mexico. The program is centered on the San Marcial Resource Area and will incorporate a 3D Induced Polarization (“IP”) survey as well as ground magnetometry.

The survey is scheduled to cover an area of approximately 8.1 km2, approximately 64% of the concession area. As the key structures and mineralization on the concession are oriented NW-SE, the geophysical survey lines are designed perpendicular to these structures, in a SW-NE orientation (Figure 1). This way the best geological information is obtained from the geophysical results.

In addition to the Resource Area, the program will also encompass high priority target areas identified by recent lithogeochemical sampling and follow-up mapping and sampling.

The survey will initially focus on the Resource Area to characterize the known Ag-Pb-Zn mineralization therein, which hosts the NI 43-101 resource. A higher line density for the survey is planned over the Resource Area, which allows higher resolution of geophysical data and geological information. This will deliver a guide as to potential extensions to the mineralization along strike, and the 3D IP will provide additional insight into depth extensions to the deposit. The geophysical response of the Resource Area will then be used to identify similar buried anomalies that could host hidden Ag-Pb-Zn resources, particularly along the key contact between the lower dacitic units in the SW and the upper volcanic units in the N and E.

GR Silver Mining President and CEO, Marcio Fonseca, commented, “We are excited to be undertaking the first major geophysical investigation of the San Marcial Project. The ground based survey of 3D IP and magnetometry will assist our technical team to better understand the underlying geology, map key structures – particularly those not apparent at surface – and to identify potentially mineralized zones both in the vicinity of the San Marcial Ag resource as well as on some of the key target areas identified by the Company over the past two years. We expect new anomalies derived from this study to generate additional drill targets for follow up later this year.

The Company estimates that the survey will highlight a number of structural and lithological features in addition to the key contact hosting the San Marcial resource. Recent reconnaissance geological mapping has identified intrusive rocks (granodioritic), particularly S of the Resource Area. It is expected that the extent of these intrusive rocks will be prominent from the geophysical survey, thus aiding in lithological mapping of these units.

The survey will also support mapping of mineralized zones that contain chargeable metal sulphide mineralization, that will then allow for interpretation based on the nature of the known mineralized structures on the property. As the survey moves away from the Resource Area, it will cover many of the targets already highlighted by previous GR Silver Mining exploration campaigns, such as: Guacamayo and Limoncillos to the S, and Faisanes, Mariposa, Nava, Micuines and Chachalaca in the W and NW.

The IP survey is being conducted by DIAS Geophysical of Saskatoon, SK (“DIAS”) using the company’s DIAS32 direct current resistivity and induced polarization (“DCIP”) distributed array system. This methodology is expected to provide a continuous 3D model over the property, with lines spaced at 200 m, and more intense 100 m spacing over the San Marcial Resource Area (Figure 1). In addition, a ground magnetic survey is being conducted along the same lines as the IP survey.

Line cutting for the survey was initiated in December, and completed in early February. The field crew is working out of the San Marcial camp, located approximately in the center of the property and grid, under a COVID-19 protocol developed by the Company in compliance with the requirements of the Mexican authorities.

The Company has contracted the services of Condor Consulting Inc. to process and analyze the results of the DIAS 3D IP and ground magnetic survey to produce 3D inversion models of the resistivity, chargeability and magnetic data, with indications of potential structures and mineralized zones for regional exploration targeting.

The footwall of the NI 43-101 resource is where the Company is currently integrating all data, aiming to study un-tested areas close to the current mineralization with the potential to expand the San Marcial Resource. Future drilling will further test this footwall zone, while providing information on the orientation, continuity and grade of mineralization at depth.

The scientific and technical data contained in this news release related to the San Marcial project were reviewed and/or prepared under the supervision of Marcio Fonseca, PGeo. He has approved the disclosure herein.

GR Silver Mining owns 100% of the Plomosas Silver Project located near the historic mining village of La Rastra, within the Rosario Mining District. The Project is a past-producing asset where only one mine, the Plomosas silver-gold-lead-zinc underground mine, operated a 600 tpd crush milling flotation circuit from 1986 to 2001, producing approximately 8 million ounces of silver, 73 million pounds of lead and 28 million pounds of zinc.

The Project has an 8,515-hectare property position and is strategically located within 5 km of the Company’s San Marcial Silver Project in the southeast of Sinaloa State, Mexico.

The Company has commenced an 11,900 m drilling program with surface holes focused on expanding known mineralization along strike in two initial areas, the Plomosas Mine Area and the San Juan Area. Underground drilling included in the program will target the extension of recent polymetallic discoveries at the lowest level (775 m RL, or ~250 m below surface) of the Plomosas Mine Area and six low sulphidation epithermal veins at San Juan Area. Both areas will be the subject of NI 43-101 resource estimations following completion of this drill program.

The silver and gold mineralization on this Project display the alteration, textures, mineralogy and deposit geometry characteristics of a low sulphidation epithermal silver-gold-base metal vein/breccia mineralized system. Previous exploration was focused on Pb-Zn-Ag-Au polymetallic shallow mineralization, hosted in NW-SE structures in the vicinity of the Plomosas mine. The E-W portion of the mineralization and extensions for the main N-S Plomosas fault remain under- explored.

San Marcial is a near-surface, high-grade Ag-Pb-Zn open-pit-amenable project, which contains a 36- million-ounce AgEq (indicated) and 11 million oz AgEq (inferred) NI 43-101 resource estimate. The Company has filed a National Instrument 43-101 (“NI 43-101”) report entitled “San Marcial Project Resource Estimation and Technical Report, Sinaloa, Mexico” having an effective date of March 18, 2019 and an amended date of June 10, 2020 (the “Report”). The Report was prepared by Todd McCracken and Marcelo Filipov of WSP Canada Inc. and is available on SEDAR. The company recently completed over 320 m of underground development in the San Marcial resource area, from which underground drilling is planned to expand the high-grade portions of the resource down dip. The company recently discovered additional mineralization in the footwall, outside of the existing resource, and will also be drilling this area. GR Silver Mining is the first company to conduct exploration at San Marcial in over 10 years. The NI 43-101 resource estimate (San Marcial project — resource estimation and technical report) was completed by WSP Canada Inc. on March 18, 2019, and amended on June 10, 2020. Plomosas and San Marcial collectively represent a geological setting resembling the multimillion-ounce San Dimas Mining District which has historically produced more than 600 Moz Ag and 11 Moz Au over a period of more than 100 years.

Recent exploration has identified Ag and Au mineralization in areas previously defined as non- mineralized, discovering evidence of pervasively altered rocks with intense silicification, veining and associated wide, Ag and Au mineralized zones on the footwall of the NI 43-101 resource.

development in the same vicinity of Plomosas and San Marcial in the Rosario Mining District.