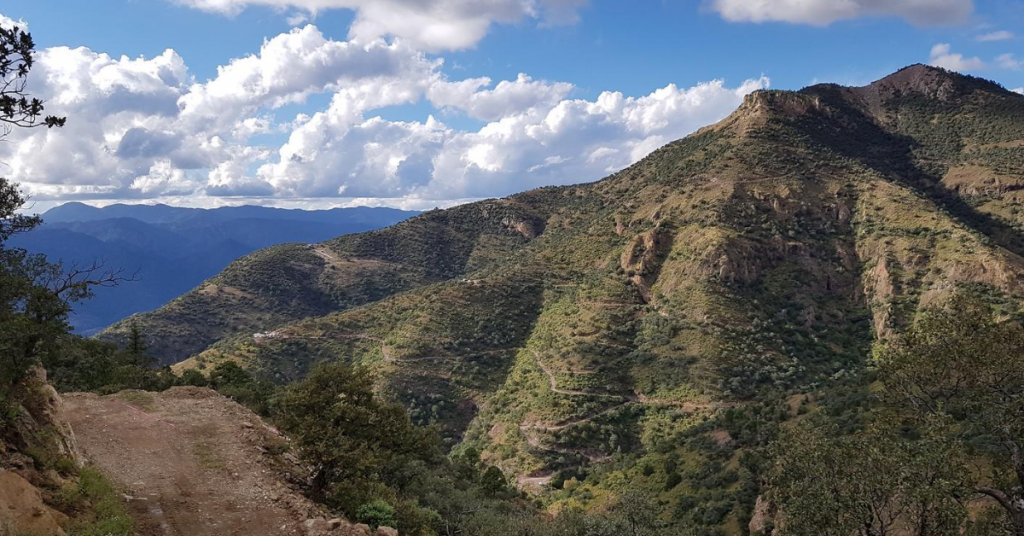 Ongoing work at El Rubi indicates the presence of thin, high-grade structures, often within a halo of lower grade material within the footwall of the main mineralized structure. The stringers are currently interpreted as high angle secondary structures, adjacent to the main zone and drill hole LV20-245 was designed as a scissor hole, oriented eastward to assist in clarifying this interpretation. The mineralized zones in this hole are represented by breccias and quartz stockwork typical of the intervals encountered elsewhere at El Rubi, and were encountered higher in the hole than expected and were broader. Silver Viper’s interpretation of the true width/orientation of these zones will continue to evolve, as further holes are drilled. Observed vein intersection angles do not suggest the hole was drilled at a low angle to the structures.

Silver Viper’s President and CEO Steve Cope states, “We are extremely pleased to see the second of our scissor holes at El Rubi intercept a long run of mineralization, starting at a depth of 75 metres down hole. The hole was designed to intercept thin but often high-grade stringers we have seen in the footwall of the El Rubi structure. While not unexpected, the length of this interval reached 110 metres of gold-silver mineralization which is a very positive result. This discovery requires rigorous and extensive follow up, but it appears to support our belief that the western zone could reveal itself as a significant part of the El Rubi story.”

Work at El Rubi has focused on a north-northwest trending mineralized zone composed of a steeply-dipping, gold-silver bearing, quartz stockwork/breccia zone, underlain to the west by a series of mineralized structures, currently interpreted as stringers to the main zone. Mineralization at El Rubi has now been intercepted over 500 metres along trend. A second drill mobilized to site in March, provided an early test of the first of three exploration targets, namely Macho Libre. Drilling at Macho Libre is complete, with a total of 11 holes for 2,516 metres drilled over a 1,000-meter-long portion of the Macho Libre trend. The diamond drill has now moved to the second, El Molino (Rubi East) target.

Results tabulated below form part of the ongoing second phase of work at La Virginia. Phase II has advanced steadily from November 2019 up until a pause in late March of 2020, by which time the Company had completed 24 holes for a cumulative 6,955 metres. Work recommenced in June, under comprehensive and strict new COVID-19 safety protocols and monitoring. At time of writing, Phase II totals 26 drill holes for a total of 6,651 metres at El Rubi, Macho Libre and most recently, El Molino.

Tabulations of significant intercepts for the current batch of drill holes from El Rubi and Macho Libre are included below. A drill plan showing the relative locations of the collars is accessible on the Silver Viper website.

Holes LV20-235, LV20-237 and LV20-238 were drilled as part of the systematic campaign at the El Rubi discovery. LV20-325 (Azimuth 240, Dip -500) was drilled on local section 10350N and targeted the zone above (higher elevation) the previously reported LV20-234. LV20-237 (Azimuth 240, Dip -450) and LV20-238 (Azimuth 240, Dip -60) reflect local section 10400N, and intersected mineralization higher in the holes than expected, possibly indicating a slight change in orientation of the mineralization toward the north. While no significant intercepts are reported from LV20-237, a low-grade zone was encountered.  Deeper follow-up holes are planned on this section.

Hole LV20-243 (Azimuth 240, Dip -650) was drilled within the El Rubi system and provides further data points for the resource calculation work being compiled by Silver Viper.

Hole LV20-245 (Azimuth 090, Dip -450) represents a scissor hole through El Rubi. Previous news releases refer to a series of thin, often well mineralized zones occurring in the footwall of and to the west of the main El Rubi zone. Hole LV20-245 was designed to pass through this stringer zone and then the main Rubi zone from the western side. Several mineralized intervals are reported from this hole, including a 110.5 metre zone between 75 metres and 185.5 metres downhole as well as a 22.5 metre zone between 239 metres and 261.5 metres and a 13 metre zone between 284.5 metres and 297.5 metres down hole. The results reported indicate the possibility of a broader than expected western zone. Further exploration of this area is warranted. The current data is being incorporated into the developing exploration resource calculation models.

The reconnaissance holes reported herein targeted a mineralized structure mapped at surface, and it is possible that in most cases the structure was not intercepted at the optimal depth. Mineralization at Macho Libre is related to silicified and oxidized breccia hosting fine quartz veining. Sample results related to two additional drill holes have yet to be returned from the laboratory.

La Virginia is located 220 km east-northeast of Hermosillo, Sonora. It is a large exploration area, primarily prospective for fault-controlled, low-sulphidation epithermal precious metal mineralization. The Property and historical exploration database were acquired by way of option agreements made with two distinct parties. Gold and silver mineralization at La Virginia occurs within breccias, veins and stockworks, hosted primarily by andesitic volcanics, often in close spatial association to, or cross-cutting pre-mineral dacite dykes and controlled by fractures and faults that define the regional structural trend. Originally 37,700 hectares in size, Silver Viper’s reconnaissance program has identified key targets and trends which are of primary interest. The Company has filed reductions of the large concessions to better focus efforts on the high priority trends.

At La Virginia, Silver Viper’s Phase I drilling comprised work over five target areas totaling 4,753 metres in 20 drill holes. Phase II drilling was paused in March of 2020 at a meterage of 6,955 metres in 24 holes. Work recommenced in mid-June and is expected to continue for the coming months. Hermosillo-based drill contractor, Globexplore Drilling Corp., has provided the drilling services. Drilling by the Company to date builds upon a sizeable database including 52,635 metres of drill core from 188 diamond drill holes, generated by the efforts of previous operators between 2010 and 2013. Silver Viper is expanding upon this work by continuing exploration northward into prospective untested ground. A recently completed airborne survey was flown by Geotech Ltd.

Silver Viper Minerals Corp., is a Canadian-based junior mineral exploration company focused on precious metals exploration in the northwestern Mexican state of Sonora. The Company currently operates the La Virginia Gold-Silver Project. Silver Viper has 100% ownership of the La Virginia concessions acquired from the most recent operator, Pan American Silver Corp., and has an option to acquire a 100% interest in the Rubi-Esperanza group of claims internal to those concessions. Silver Viper is under management provided by the Belcarra Group, which is comprised of highly qualified mining professionals.

On behalf of the board of directors,

Information set forth in this press release contains forward-looking statements. These statements reflect management’s current estimates, beliefs, intentions and expectations; they are not guarantees of future performance. The Company cautions that all forward-looking statements are inherently uncertain and that actual performance may be affected by a number of material factors, many of which are beyond the Company’s control. Such factors include, among other things: risks and uncertainties relating to exploration and development, the ability of the Company to obtain additional financing, the need to comply with environmental and governmental regulations, fluctuations in the prices of commodities, operating hazards and risks, competition and other risks and uncertainties, including those described in the Company’s financial statements available on www.sedar.com. Accordingly, actual and future events, conditions and results may differ materially from the estimates, beliefs, intentions and expectations expressed or implied in the forward-looking information. Except as required under applicable securities legislation, the Company undertakes no obligation to publicly update or revise forward-looking information.