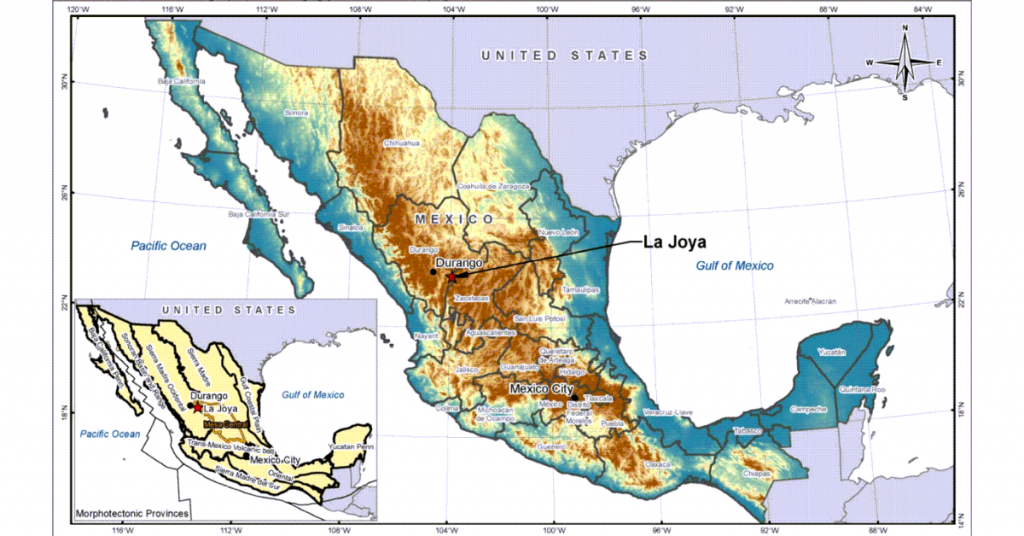 Phase 3 drilling results not previously reported include the highest sampled Silver, Copper and Gold grades to date from the Main Mineralized Trend

Vancouver, British Columbia–(Newsfile Corp. – August 25, 2020) – Silver Dollar Resources Inc. (CSE: SLV) (“Silver Dollar” or the “Company”) is pleased to report highlights from the most recent diamond drilling program at the La Joya Silver Project in Durango, Mexico. Under the terms of the Definitive Agreement between Silver Dollar and First Majestic Silver Corp, (First Majestic), Silver Dollar has been granted an exclusive option to acquire up to a 100% interest in the La Joya silver-copper-gold (Ag-Cu-Au) property that includes the Main Mineralized Trend (MMT), Santo Nino and Coloradito deposits (see news release of August 10th, 2020 and Figure 1).

The following results from the Phase 3 drilling program, completed by SilverCrest Mines Inc. (SilverCrest) between February 17 and March 29, 2014, were not previously reported. Records of the Phase 3 program were obtained by Silver Dollar through the file-sharing arrangement under the Definite Agreement with First Majestic. Announcement of the drilling program was included in the final Management Discussion and Analysis issued by SilverCrest, dated November 12, 2014, for the three and nine months ended September 30, 2013, which reads:

The updated resource model was never completed due to First Majestic’s acquisition of SilverCrest that was completed on October 1, 2015.

The Phase 3 drilling program targeted infill drilling along the Main Mineralized Trend (Figure 2) and was successful in confirming significant mineralization in 15 of 17 holes (two holes were drilled for geotechnical logging and no assay records have been located). The results provide Silver Dollar with further confidence in the extent of the mineralized system and verify several key features of the polymetallic Ag-Cu-Au deposit identified in the National Instrument (NI) 43-101 Preliminary Economic Assessment Technical Report (the “PEA”), with Effective Date of October 21, 2013, and Released Date of December 5, 2013 (refer to SEDAR) including:

Assay highlights from drill hole core samples are summarized in the following table:

“While we knew the Phase 3 drilling was completed at La Joya, we were exceptionally pleased to learn the program returned the highest-grade silver, copper and gold hits to date from the Main Mineralized Trend,” said Mike Romanik, President of Silver Dollar. “A target that is of particular interest is the 750-metre gap between the Main Mineralized Trend and the Santo Nino Deposit, where no drilling has been undertaken. It demonstrates the tremendous potential for resource expansion and will be a priority in our initial exploration campaign.”

Sampling of the drill core was conducted along the entire length of each hole below overburden (excepting hole LJ DD14-117, where sampling started at 34.55 m downhole depth) generally at 1 metre sample lengths, up to a maximum of 5.5 metres, except within visually mineralized intervals where sample intervals respected geological contacts down to a minimum interval of 0.10 metre downhole length. A total of 2,596 drill core samples were collected.

The samples were submitted to the Inspectorate preparation lab based in Durango, Mexico, and shipped to Acme Laboratories (both labs part of the Bureau Veritas Group Companies), based in Vancouver, Canada for analysis. Samples were crushed and split from which 250-gram subsamples were pulverized to 200 mesh.

Additionally, 279 samples were submitted to the laboratory for quality assurance and control (QA/QC). These were comprised of 246 blank samples and 33 certified standard reference samples. No duplicates samples appear to have been collected as part of this campaign. The QA/QC results have been reviewed and no concerns have been identified.

Garry Clark, P.Geo., of Clark Exploration Consulting, a “Qualified Person” as defined in NI 43-101, has reviewed and approved the technical content in this press release.

About the La Joya Project

Under the terms of the Definitive Agreement between Silver Dollar and First Majestic (see news release of August 10th, 2020), Silver Dollar has been granted an exclusive option to acquire an initial 80% interest, and if exercised, a second option to acquire an additional 20% interest for an aggregate 100% interest in First Majestic’s La Joya silver-copper-gold property. The Property, located in the south-eastern portion of the State of Durango in the Mexican Silver Belt (Figure 3), consists of 15 mineral concessions totalling 4,646 hectares and hosts the Main Mineralized Trend (MMT), Santo Nino and Coloradito deposits.

The Property is situated approximately 75 kilometres (km) directly southeast of the state capital city of Durango in a prolific mineralized region with past-producing and operating mines including Grupo Mexico’s San Martin Mine, Industrias Penoles’ Sabinas Mine, Pan American Silver’s La Colorada Mine and First Majestic’s La Parrilla and Del Toro Silver Mines. Access and infrastructure near the Property are considered excellent with highway, rail and power lines nearby.

Silver Dollar Resources Inc. is a mineral exploration company focused on creating shareholder value by finding and developing economic precious and base metal deposits. Having completed its initial public offering in May 2020, the Company trades on the Canadian Securities Exchange under the symbol “SLV”. Silver Dollar’s projects are located in two of the prolific mining jurisdictions in the world and include the advanced exploration/development stage La Joya Silver Project in Durango, Mexico, and the discovery-stage Pakwash Lake and the Longlegged Lake properties in the Red Lake Mining District of Ontario, Canada. The Company has an aggressive growth strategy and is actively reviewing projects in mining-friendly jurisdictions internationally for potential acquisition.

This news release contains forward-looking statements and forward-looking information (collectively, “forward-looking statements”) within the meaning of applicable Canadian securities legislation. All statements, other than statements of historical fact, included herein including, without limitation, statements regarding the exercise of the first or second option to acquire a 100% interest in the Property future capital expenditures, anticipated content, commencement, and cost of exploration programs in respect of the Property , are forward-looking statements.. Often, but not always, forward looking information can be identified by words such as “pro forma”, “plans”, “expects”, “will”, “may”, “should”, “budget”, “scheduled”, “estimates”, “forecasts”, “intends”, “anticipates”, “believes”, “potential” or variations of such words including negative variations thereof, and phrases that refer to certain actions, events or results that may, could, would, might or will occur or be taken or achieved.

In making the forward-looking statements in this news release, the Company has made certain assumptions, including without limitation, that market fundamentals will result in sustained precious and base metals demand and prices, the receipt of any necessary permits, licenses and regulatory approvals in connection with the future exploration of the Property, that the COVID-19 global pandemic will not affect the ability of the Company to conduct exploration, the availability of financing on suitable terms to make the cash payments required by the Definitive Agreement..

Forward-looking statements involve known and unknown risks, uncertainties and other factors which may cause the actual results, performance or achievements of the Company to differ materially from any future results, performance or achievements expressed or implied by the forward-looking statements. Such risks and other factors include, among others, s of the Company to obtain sufficient financing to fund the cash payments and expenditures required by the Definitive Agreement,, delays in obtaining governmental and regulatory approvals, permits or financing, changes in laws, regulations and policies affecting mining operations, the Company’s limited operating history, currency fluctuations, title disputes or claims, and environmental issues and liabilities.