Sierra Metals Increases Mineral Resources Versus its December 2019 Announcement and Updates the Mineral Reserve Estimate for its Bolivar Mine, Mexico 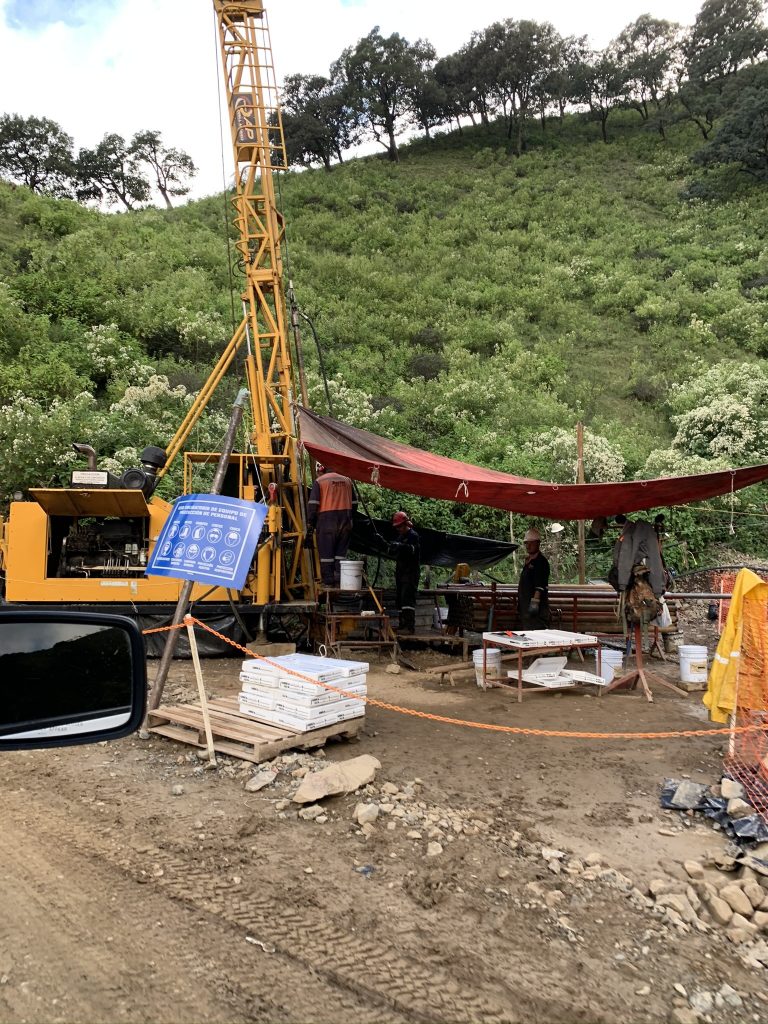 The updated Mineral Reserve and Resource Estimate disclosed herein follows the Mineral Resource update that was published at the end of 2019. This Mineral Reserve and Resource update now includes additional drilling information for drilling that took place between October and December of 2019 of approximately 10,203 metres as well as the results from a litho-structural model. This Mineral Resource update also includes production data up to December 2019. The recent infill drilling campaign has been focused on the area of El Gallo Inferior taking where the Company took advantage of accessibility in the Mine to be able to complete drilling. Further drilling at locations containing mid to high grade zones such as Bolivar West are scheduled to begin as soon as development to these areas is complete and the Company has access to those higher-grade areas.

A Technical Report is currently being prepared by SRK Consulting (Canada Inc.) and Sierra Metals Inc. in accordance with NI 43-101 standards of disclosure and will be filed on SEDAR and with the Securities Exchange Commission within 45 days of this news release.

Igor Gonzales, President and CEO of Sierra Metals Inc. commented: “We are excited about the significant increase in Bolivar’s mineral resources from additional work completed in the past three months, since our year-end 2019 mineral resource update. As promised in our December 31, 2019 press release, we have provided in the first quarter of 2020, another updated report which includes additional drilling as well as information from a Litho Structural model which has increased the mineral resources further from the previous press release. This larger mineral resource reflects the success of our exploration programs and the potential at our Bolivar operations to justify further throughput expansions. This report also updates our ore reserves relative to our last reserve update from 2017. It is worth noting that after two years of mining depletion we realized only a 5% decline in tonnage and 2% decline in copper content, which reflects our ability to replace the mineral reserves at the Mine over the years.”

He added “The quality of the defined areas within this release are similar to the recent Yauricocha Mineral Reserve and Resource update, in that they have incorporated improved methodologies to provide us with a higher quality and better refined Mineral Reserve and Resource. Since the latter part of 2017, the Company has been executing on a 75,454 meter drilling campaign at Bolivar which includes approximately 10,200 meters recently completed in Q4 2019 in addition to a significant portion of the program previously completed. Drilling in Q4 2019 occurred mainly at the Fierro Mine (Gallo Inferior) where the grade is typically no higher than 0.7% copper in-situ. However, infill drilling is still planned for the Bolivar West, and Bolivar Northwest zones which are considered to be high-value targets. These high value target zones could not be drilled in Q4 2019 due to contractor delays in the development which affected the areas that were going to have drill stations strategically located to infill drill these high value target areas. Bolivar West contains higher copper grades of up to1.5% copper in-situ as well as increased gold and silver grades. Please see previous press releases dated Oct 4, 2017 and June 6, 2018. Subsequent exploration programs are planned in the coming year with a goal of increasing tonnage and grades at Bolivar.”

To take advantage of the large increase in Mineral Resources, the Company is committed to updating the Preliminary Economic Assessment (“PEA”) for the Bolivar Mine as this will provide us with a clear path to further potential expansions at the Mine beyond the 5,000 tpd level. The Previous PEA recommended an increase of production to the 5,000 tpd level by 2021, and Sierra is already very close to achieving that level of production now.

During 2020 we will continue studying and implementing mining methods to recover pillars that are not part of the current Mineral Reserves. Additionally, back-filling alternatives will also be evaluated.

Highlights of the Mineral Resource and Reserve Update:

The December 31, 2019, consolidated Mineral Reserve Estimate for the Bolivar Mine area is presented in Table 1.

(1) Mineral Reserves have been classified in accordance with the Canadian Institute of Mining, Metallurgy and Petroleum (“CIM”) Definition Standards on Mineral Resources and Mineral Reserves, whose definitions are incorporated by reference into NI 43-101

(2) All figures are rounded to reflect the relative accuracy of the estimates. Totals may not sum due to rounding.

(5) The mining costs are based on projected costs for mining at 5,000 tonnes per day using Room and Pillar mining methods.

(7) A 10% external dilution has been included with zero grade for room and pillar mining.

(8) Mining recovery for room and pillar mining is estimate at 98%.

(9) CuEq figures do not include Cu recovery, but include Ag and Au recoveries.

This Mineral Resources Estimate incorporates new exploration and infill drilling, reduced operational costs, higher commodity price assumptions, sampling, face mapping information into the geologic interpretations, and grade estimations which have resulted in a further refinement of the ore body. It is Management’s view that the resulting Mineral Resource Estimate reflects the ongoing efforts by the Company to achieve good value from the Bolivar asset, given the current operating and metal price environment.

Mineral Reserve Estimations have been prepared by SRK to support public disclosure of Mineral Reserves. The Qualified Person (the “QP”) who supervised the preparation of this is Carl Kottmeier, P. Eng., MBA, Principal Consultant (Mining), a Qualified Person under National Instrument 43-101 – Standards of Disclosure for Mineral Projects. SRK also developed the mine design and production schedule using Deswik software and worked closely with the management and planning team at the Bolivar Mine.

The procedures and methods supporting the mineral reserve estimations have been developed in conjunction with Sierra Metals’ mine planning personnel. The reserve estimates presented herein have been conducted by SRK using supporting data generated by the site. SRK notes that the methods and procedures are reasonable and consistent with industry best practice. Each mining area was evaluated using reasonable mining block shapes based on the mining method applicable to the zone. Data and information supporting the mining recovery, mining dilution, reconciliation-based grade adjustments, metallurgical recoveries, consensus commodity pricing, and treatment and refining charges were provided by Sierra Metals and reviewed by SRK. These factors are used to calculate unit values for the blocks in the models. Historic and expected direct and indirect mining, processing, and general and administrative costs were provided by Sierra Metals. To be considered economic, the Net Smelter Return (NSR) value of the mining block must be greater than the economic cut-off. Blocks below the economic cut-off but above the marginal cut-off are, in some cases, included in the reserves estimate where they are in between, or immediately adjacent to, an economic block, and where it is reasonable to expect that no significant additional development would be required to extract the marginal block. Isolated blocks, defined as blocks with no defined access, have been excluded. Mined out areas were provided by Sierra Metals’ personnel.

SRK is of the opinion that the reserve estimations are suitable for public reporting and are a fair representation of the mill feed tonnes, grade, and contained metal for the Bolivar deposit.

SRK has worked with Sierra Metals / Dia Bras personnel to develop the mineralization models, estimations, and reporting criteria for mineral resources at Bolivar. Mineralization models were initially developed by Sierra Metals and were reviewed and modified by SRK. In all, there are thirty individual mineralized bodies identified through drilling and mine development. These were used as hard boundaries for the purposes of the estimation. The block models were created by SRK and have been estimated using a combination of inverse distance and ordinary kriging methods. The mineral resources have been estimated in conformity with generally accepted CIM “Estimation of Mineral Resource and Mineral Reserves Best Practices” guidelines.

The December 31, 2019, consolidated mineral resource statement for the Bolivar Mine area is presented in Table 1. These resources have been stated in unmined areas of the deposits.

(3) CuEq figures do not include Cu recovery, but include Ag and Au recoveries

Table 4 – 2019 Mineral Resource Estimate % differences from the Prior Estimate (October 2017):

All technical production data contained in this news release has been reviewed and approved by Americo Zuzunaga, FAusIMM (CP Mining Engineer) and Vice President of Corporate Planning is a Qualified Person and chartered professional qualifying as a Competent Person under the Joint Ore Reserves Committee (JORC) Australasian Code for Reporting of Exploration Results, Mineral Resources and Ore Reserves.

Sierra Metals Inc. is Canadian based growing polymetallic mining company with production from its Yauricocha Mine in Peru, and its Bolivar and Cusi Mines in Mexico. The Company is focused on increasing production volume and growing mineral resources. Sierra Metals has recently had several new discoveries and still has additional brownfield exploration opportunities at all three Mines in Peru and Mexico that are within or close proximity to the existing Mines. Additionally, the Company has large land packages at all three Mines with several prospective regional targets providing longer term exploration upside and mineral resource growth potential.

This press release contains “forward-looking information” and “forward-looking statements” within the meaning of Canadian and U.S. securities laws related to the Company (collectively, “forward-looking information”). Forward-looking information includes, but is not limited to, statements with respect to the Company’s operations, including anticipated developments in the Company’s operations in future periods, the Company’s planned exploration activities, the adequacy of the Company’s financial resources, and other events or conditions that may occur in the future. Statements concerning mineral reserve and resource estimates may also be considered to constitute forward-looking statements to the extent that they involve estimates of the mineralization that will be encountered if and when the properties are developed or further developed. These statements relate to analyses and other information that are based on forecasts of future results, estimates of amounts not yet determinable and assumptions of management. Any statements that express or involve discussions with respect to predictions, expectations, beliefs, plans, projections, objectives, assumptions or future events or performance (often, but not always, using words or phrases such as “expects”, “anticipates”, “plans”, “projects”, “estimates”, “assumes”, “intends”, “strategy”, “goals”, “objectives”, “potential” or variations thereof, or stating that certain actions, events or results “may”, “could”, “would”, “might” or “will” be taken, occur or be achieved, or the negative of any of these terms and similar expressions) are not statements of historical fact and may be forward-looking information.

Forward-looking information is subject to a variety of risks and uncertainties, which could cause actual events or results to differ from those reflected in the forward-looking information, including, without limitation, the risks described under the heading “Risk Factors” in our Annual Information Form dated March 28, 2019 in respect of the year ended December 31, 2018 and other risks identified in the Company’s filings with Canadian securities regulators and the U.S. Securities and Exchange Commission, which filings are available at www.sedar.com and www.sec.gov, respectively.