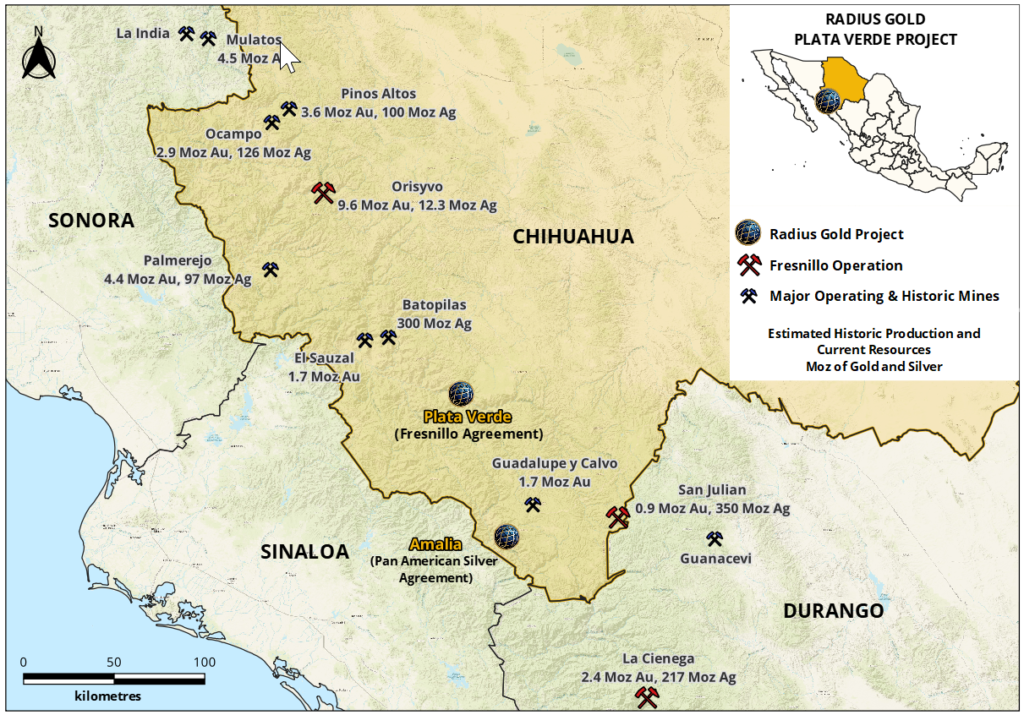 Fresnillo is the world’s leading silver producer and Mexico’s largest gold producer. Fresnillo holds one of the largest precious metals reserves in Mexico.

Bruce Smith, President and CEO of Radius, stated, “Plata Verde has the potential to be a large-scale silver discovery and our new partner Fresnillo, as the world largest primary silver producer, recognizes that potential. Together, we have the technical resources and skills to explore and maximize the potential of the Plate Verde project. Plate Verde is located between two of Fresnillo’s premier mining assets, the San Julian Mine, with FY21 mine production of 55,847 gold oz and 16,772,000 silver oz, and the Orisyvo project with indicated and inferred resources of 9.6 moz gold and 12.7 moz silver*. With Fresnillo’s scale and successful exploration, development and operational experience in the region, Radius has a great partner to advance Plata Verde.”

Highlights of the potential Definitive Agreement are summarized below:

The Plata Verde project is located in Chihuahua, Mexico, north of Radius’ Amalia Gold-Silver project and east of the historic Batopilas silver mining district (1708 to 1920) which reputedly produced over 300 million ounces of silver from high grade veins and structures.  A new road has been constructed to enable access to the property.

Radius geologists have re-discovered an undocumented large scale underground bulk mining operation where in the late 1800’s, historic miners hand excavated an extensive series of anastomosing caverns, producing silver bars at an associated smelter operation. The project appears to be un-explored since the miners ceased their operations, and no references have been found within the Mexican Geological Survey. The few local residents have no knowledge of exploration companies working in the area and there are no indications of prior exploration within the mines or surrounding outcrops. Initial prospecting rock chips by Radius geologists have returned silver grades up to 1070 g/t Ag.

At Plata Verde, silver mineralization occurs as massive to crustiform banded silica, barite and calcite with silver chlorides, sulphosalt minerals and native silver infilling and cementing fractures and breccia within a basaltic/andesite extrusive volcanic. The basaltic/andesite host occurs at the base of the Upper Rhyolitic Volcanics of the Northern Sierra Madre. In general, the host volcanics and associated silver mineralization are covered by the overlying rhyolitic ignimbrites and are only exposed along the length of a small creek.

On the eastern side of the creek several small entrances, hardly visible, lead to an extensive network of anastomosing mining tunnels and cavities. The mining and excavation were done by hand with hammer, chisel and black powder explosives, leaving behind large underground cavities up to 50m x 50m x 30m high. Throughout the mines roman numerals painted on the walls record up to 58 mining areas. The mining excavations define a strike extension of over 500m and up to 100m wide. The host volcanic unit is at least 60m thick. The southern extension is cut by a fault which forms a large cliff face. To the north, east and west the host volcanic flows and silver mineralization are covered by the ignimbrites and remain open to unknown extent in these directions.

The barite/silver chloride mineralization appears to be a late-stage low temperature mineralizing event with the source and feeder systems an attractive exploration target. Barite and silver chloride are often part of the upper levels or supergene zone around large silver deposits, notably within parts of the Fresnillo district. The solubility of barite and silver chlorides is low, and hence the source zone is likely to be close by. Extensions of the known manto style mineralization below the ignimbrite cover to the north, east and west are open.

Bruce Smith, M.Sc. (Geology), a member of the Australian Institute of Geoscientists, is Radius’ Qualified Person as defined by National Instrument 43-101 – Standards of Disclosure for Mineral Projects.  Mr. Smith has 28 years of mineral exploration experience and has prepared and approved the technical information contained in this news release.

Reported assays are rock chip and channels samples taken by Radius geologists and trained sampling teams. Sample intervals are generally 2m chip channels or 2x2m panels producing samples of between 2 to 9 kg. Reported samples were delivered to SGN Laboratories in Paral, Chihuahua. The samples were crushed and pulverized. Two 100 gram splits were taken. Radius geologists removed and stored the excess and a 100g split at the Radius offices. SGN performed initial Ag and Au analysis. The second split was subsequently sent to the ALS Geochemistry laboratory facilities in Chihuahua, Mexico and was analyzed for Ag and multi-elements using method code ME-ICP61 following a four-acid digestion. Overlimits are analyzed using an appropriate method. All assays reported above 30g/t Ag have been analyzed by ALS Geochemistry. Radius routinely inserts multi-element geochemical standards and blanks into the sample stream to monitor laboratories performance. Quality control samples submitted were returned within acceptable limits. Comparisons between sample splits demonstrate acceptable accuracy and precision

Radius has a portfolio of projects located in Mexico, United States and Guatemala which it continues to advance, utilizing partnerships where appropriate in order to retain the Company’s strong treasury.  At the same time, management is seeking out additional investment and project acquisition opportunities across the globe.

Neither the TSX Venture Exchange nor the Investment Industry Regulatory Organization of Canada accepts responsibility for the adequacy or accuracy of this release.

Certain statements contained in this news release constitute forward-looking statements within the meaning of Canadian securities legislation. All statements included herein, other than statements of historical fact, are forward- looking statements and include, without limitation, statements about the results of exploration work and future plans at the Plata Verde Project. Often, but not always, these forward looking statements can be identified by the use of words such as “estimate”, “estimates”, “estimated”, “potential”, “open”, “future”, “assumed”, “projected”, “used”, “detailed”, “has been”, “gain”, “upgraded”, “offset”, “limited”, “contained”, “reflecting”, “containing”, “remaining”, “to be”, “periodically”, or statements that events, “could” or “should” occur or be achieved and similar expressions, including negative variations.

Forward-looking statements involve known and unknown risks, uncertainties and other factors which may cause the actual results, performance or achievements of the Company to be materially different from any results, performance or achievements expressed or implied by forward-looking statements. Such uncertainties and factors include, among others, whether the planned exploration work at Plata Verde will proceed as intended; changes in general economic conditions and financial markets; the Company or any joint venture partner not having the financial ability to meet its exploration and development goals; risks associated with the results of exploration and development activities, estimation of mineral resources and the geology, grade and continuity of mineral deposits; unanticipated costs and expenses; and such other risks detailed from time to time in the Company’s quarterly and annual filings with securities regulators and available under the Company’s profile on SEDAR at www.sedar.com. Although the Company has attempted to identify important factors that could cause actual actions, events or results to differ materially from those described in forward-looking statements, there may be other factors that cause actions, events or results to differ from those anticipated, estimated or intended.