Azure Minerals Limited (ASX: AZS) (“Azure” or “the Company”) is pleased to report that it continues to make strong progress on key elements of the Scoping Study for its 100%-owned Oposura zinc-lead-silver project with further positive results returned from follow-up metallurgical testwork.

Commenting on the testwork program, Azure’s Managing Director, Mr Tony Rovira said, “This second stage of metallurgical testwork has delivered excellent results, significantly improving on the initial testwork from last year and indicating that we will be able to produce high quality, high grade, clean concentrates with very high recoveries. These excellent results from so early in the study process makes me confident that further optimisation studies, which are currently in progress, will continue to provide additional improvements to these already good recoveries and grades.”

The objective of this metallurgical testwork is to demonstrate Oposura’s potential to generate clean, commercial grade, and therefore saleable, concentrates at acceptable metallurgical recoveries and to identify opportunities for further optimisation. Testwork was undertaken by Blue Coast Research (Nanaimo, British Columbia, Canada).

Following the favourable preliminary tests conducted in 2017 (announced 20 November, 2017) further metallurgical tests were undertaken over late February to early April, 2018. These tests were designed to optimise potential grind and flotation reagent regimes and the process flowsheet.

A 100kg bulk composite averaging 6.4% Zn, 4.2% Pb and 28.8 g/t Ag was prepared from the core of 11 resource infill drill holes and is considered representative of the overall Oposura deposit. The bulk composite was split into several sub-samples to allow multiple batch flotation tests to be undertaken. The bulk composite is more representative of the mineralisation at Oposura than the first-pass preliminary metallurgical testwork that was conducted on a composite of rock samples sourced from the historical underground workings at Oposura. 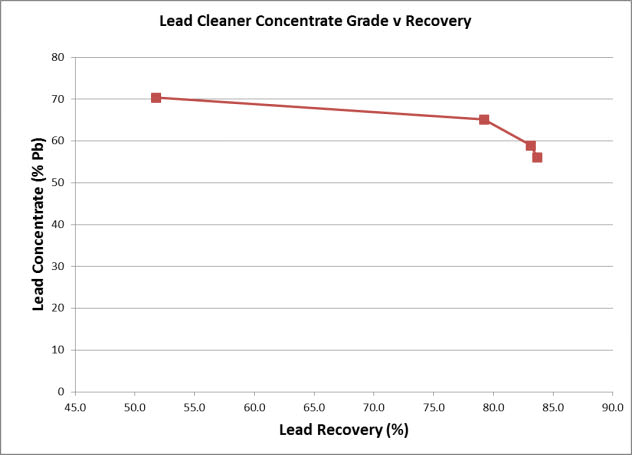 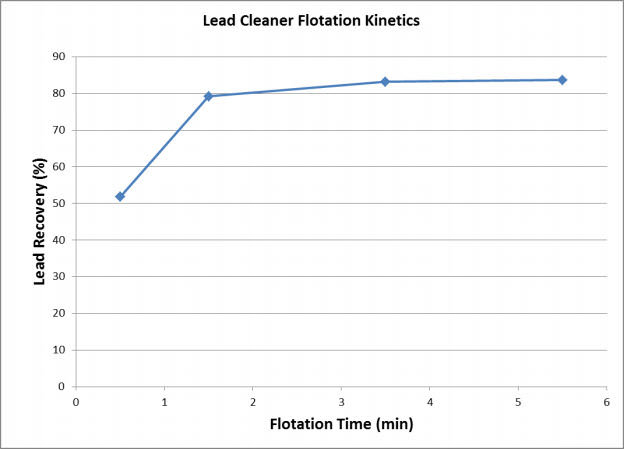 Silver recovery to the final lead concentrate was approximately 70%, with a silver grade of between 300- 350g/t Ag per tonne of concentrate.

The latest testwork reduced the zinc grade in the lead-silver concentrate from 15% zinc to 5% zinc, thereby increasing the lead grade in the lead concentrate. The tailings from the lead-silver rougher flotation cell is zinc-rich and was processed through a series of zinc rougher and cleaner flotation tests. As a result of more zinc entering into the zinc flotation circuit, zinc recovery into the zinc concentrate has increased from approximately 70% in the preliminary testwork to more than 85% in the recent program, at the international market benchmark zinc concentrate grade of 53% zinc.

These tests generated a series of concentrates with varying zinc recoveries and grades and the concentrate grade-recovery curve is shown in Figure 3. 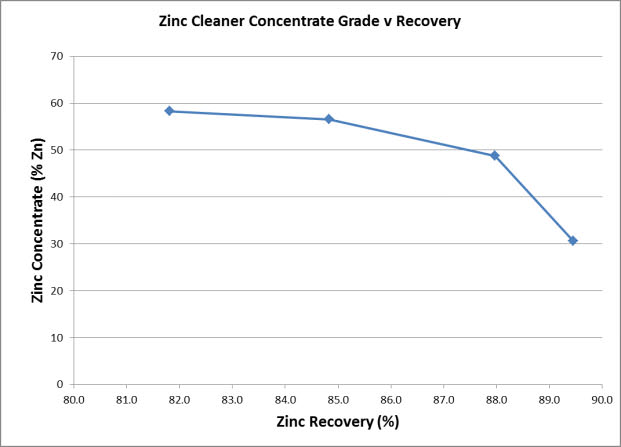 Further testwork will be undertaken to optimise recovery and concentrate grades and to test for variability across the mineralised zone. This will include locked cycle tests which will be more representative of the continuous operation of a typical flotation circuit. In addition, physical testwork is in progress on core samples to determine crushing, milling, thickening and filtration performance.