VANCOUVER, BRITISH COLUMBIA, March 6, 2018 – Millrock Resources Inc. (TSX-V: MRO, OTCQX: MLRKF) (“Millrock”) is pleased to report that the first phase of core drilling on the La Navidad gold project has been completed. The project, located in Sonora State, Mexico, 100 km north of the City of Hermosillo, targets orogenic gold deposits and is being funded under an option to joint venture agreement by Centerra Gold Inc. (“Centerra”). In total, 2,130 meters in 12 holes were drilled. The table following on the next page indicates significant and anomalous drill intersections.

Millrock President & CEO Gregory Beischer commented: “Some strong results were obtained in this program from the Anchor Zone. Drilling is tentatively planned to resume in April 2018 to test the large gold-in-soil anomalies of the Crossover and Cobre prospects that lie north and northwest of Anchor respectively.”

Anchor and Horseshoe Zone Drilling
Holes NAV-001, NAV-002, NAV-003, and NAV-010 returned strong results. All four holes fall on section line 520,700 and indicate mineralization in the shallow subsurface over a distance of 500 meters in a north-south direction. Holes NAV-004, NAV-005 and NAV-011, drilled 200 meters west on section line 520,500 were also strongly anomalous, extending mineralization in a westerly direction. Holes NAV-006, NAV-007, NAV-008 and NAV-009 which were drilled further west on section line 520,100 at the adjacent Horseshoe Zone returned weaker, narrower intersections. It had been hoped that the two zones would join together but they do not appear to do so. Therefore, the ability to build tonnage further west from the Anchor zone appears to be limited. The next exploration effort will work areas to the north and northwest where strong gold soil anomalies exist at the Crossover and Cobre prospects. Further mapping is underway in anticipation of the next drilling program. 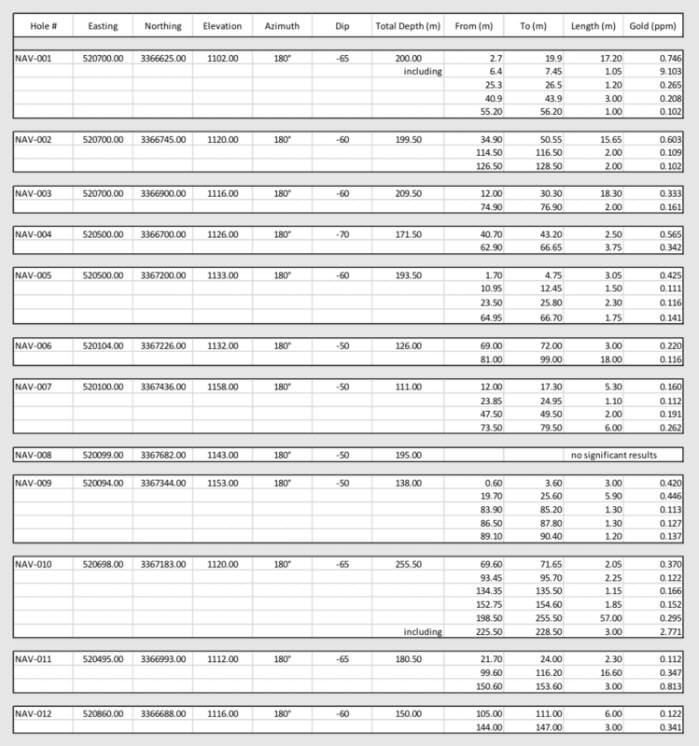 Note: The mineralized intervals reported are down-hole, measured thickness. Based on initial interpretations it appears the mineralized zone dips shallowly to the north at 15 degrees. However, there is not enough geologic control at this point to verify the interpretation and therefore to make an accurate estimate of true width with confidence. For the composited values reported, a 0.1 gram per tonne gold cut-off was used, and a maximum allowable internal dilution thickness of 2.05 meters was used. See note below concerning quality control – quality assurance.

Since forming an option to purchase agreement with the underlying mineral right owner of La Navidad in June 2017, and a simultaneous option to joint venture agreement with Centerra, Centerra and Millrock have collaborated to execute a comprehensive exploration program. Initial surface exploration results were reported in this press release by Millrock. Centerra is funding the exploration work to earn an interest in the project.

The La Navidad project targets bulk mineable, run-of-mine, oxidized deposits that could be processed by heap leaching. The prospects at La Navidad bear the characteristics of an orogenic gold system similar in nature to other gold deposits being mined or developed in the district including:

Quality Control – Quality Assurance
Millrock adheres to stringent Quality Assurance – Quality Control (“QA/QC”) standards. Drill core and samples are kept in a secure location at all times. Representative half-core samples were collected in the core shed in Magdalena and assayed at the Bureau Veritas laboratory in Hermosillo, Mexico. Preparation and analysis methods are described in further detail here. The sample preparation method code utilized was PRP70-250. Analysis methods used include FA430 (30 gr/Fire Assay/AAS) and AQ-200 (Aqua Regia – ICP/MS). For every 20 rock samples a blank sample MEG-12.02 (>0.003 ppm Au) known to contain less than 3 part per billion gold and a standard sample (Certified Reference Materials – “CRM”) of known gold concentration was also analyzed. Three different CRM standards were utilized in this program including MEG-Au 11.15 (3.4 ppm Au), MEG-Au 12.11 (1.5 ppm Au) MEG-Au 13.01 (0.31 ppm Au). The following QA/QC protocols were used for this program: 1) Duplicates were created as coarse crush duplicates on every 20th sample in the sample preparation process at the laboratory, and 2) Blanks every 20th sample, and 3) CRM every 20th sample plus additional random insertions of standards and blanks at the supervising geologist’s discretion, and 4) core sample field duplicates.

Upon review of the QA/QC results it was found that results were within acceptable tolerances for most blanks and standards. However, results for standard MEG-Au 11.15 were observed to have higher than expected values in most cases, near the upper margin of acceptability. Initially two results exceeded three standard deviations, and so were not within tolerance. This called into question the results reported for holes NAV-003 and NAV-008. The Bureau Veritas laboratory performed a reanalysis of the core samples brought into question and results were found to be nearly identical. However, one of the standard samples from Hole NAV-008 remained out of tolerance, possibly because of small remaining sample size. As a further check, Millrock sent 20 samples from each of holes NAV-003 and NAV-008 to another laboratory with standard and blank samples. Results returned were very close to the original analysis made by Bureau Veritas.  Also, as part of its protocols, Millrock sends duplicate core samples to the laboratory. The usual protocol is to cut the core in half, then cut one half of the core in quarters. Both quarters are sent to the laboratory as individual samples, and results should be similar. However, a sampling error was made by the project team. A half core and quarter core sample was sent to the lab as duplicate samples. The results of the half core versus quarter core did not match well. This is expected due to the radically different sample size. Unfortunately, this sampling error is not something that can be corrected. Given that the two re-analyses have provided very similar results as the initial assays, the Qualified Person is of the opinion that the results reported in this press release are reliable.

Qualified Person
The scientific and technical information disclosed within this document has been prepared, reviewed and approved by Gregory A. Beischer, President, CEO and a director of Millrock Resources. Mr. Beischer is a Qualified Person as defined in NI 43-101.

About Millrock Resources Inc.
Millrock Resources Inc. is a premier project generator to the mining industry. Millrock identifies, packages and operates large-scale projects for joint venture, thereby exposing its shareholders to the benefits of mineral discovery without the usual financial risk taken on by most exploration companies. The company is active in Alaska, British Columbia, the southwest USA and Sonora State, Mexico. Funding for drilling at Millrock’s exploration projects is primarily provided by its joint venture partners. Business partners of Millrock have included some of the leading names in the mining industry: Centerra Gold, First Quantum, Teck, Kinross, Vale, Inmet, Altius, and Riverside. Millrock is a major shareholder of junior explorers PolarX Limited. and Sojourn Exploration Inc.

Some statements in this news release contain forward-looking information. These statements address future events and conditions and, as such, involve known and unknown risks, uncertainties and other factors which may cause the actual results, performance or achievements to be materially different from any future results, performance or achievements expressed or implied by the statements. Such factors include without limitation the completion of planned expenditures, the ability to complete exploration programs on schedule and the success of exploration programs.