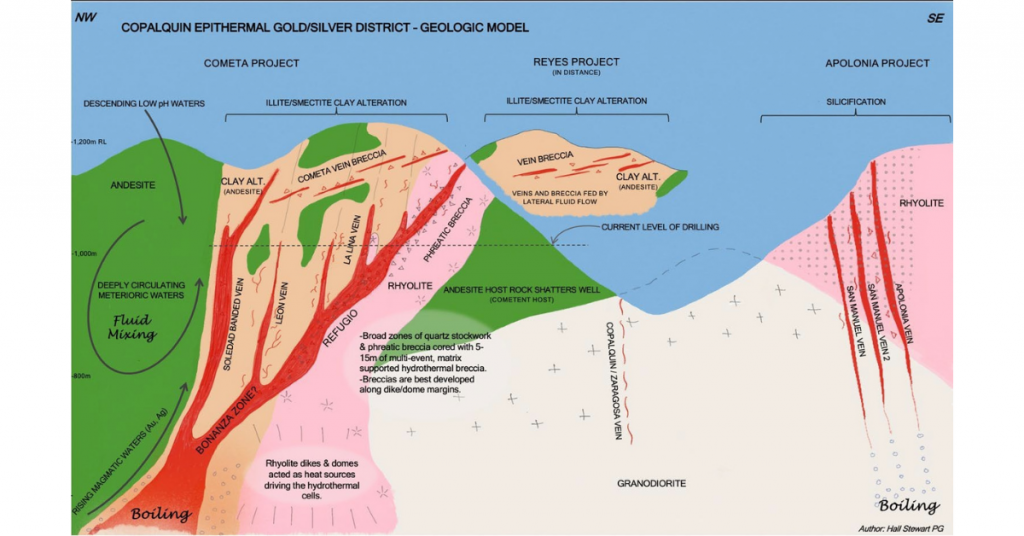 Mithril Resources Ltd (ASX: MTH) (Mithril or the Company) is pleased to provide an update on drilling activities at the Cometa Project in the Copalquin Gold Silver District, Mexico.

“The maiden drill holes at the El Refugio target have shown the area to be part of a large hydrothermal system. The broad quartz breccia zones punctuated with high grade gold-silver veins has been drill tested over 300m and is building the model of a large gold-silver system that is characterised by extensive surface alteration and rhyolite dome intrusions. This alteration is observed to extend at least 1.5km west of El Refugio in addition to the widespread alteration and rhyolitic dome intrusives in the Copalquin district. The very high grade La Soledad and Leon veins intercepted at the start of the program are also part of this larger hydrothermal system. The extension of the Cometa project at depth and along strike is a key feature of the exploration for 2021.

The first drill holes completed at the Reyes, Constancia and Apolonia projects will provide further indication of the gold and silver grade potential in these areas. We have a very large area to explore in this complex district with many strong targets identified by extensive surface mapping and supported by under-ground rock chip sampling. 2021 will be an exciting year for Mithril as we continue to develop this large epithermal centre for gold and silver.”

The second batch drill holes have been completed in the El Refugio target at the Cometa Project. The drilling has continued to successfully intercept the Refugio structure with broad brecciated and mineralised zones including the following intercepts:

The above intercepts are in addition to the previously reported El Refugio target intercepts:

As we progress through the reconnaissance drilling program at the El Refugio target we are encouraged to observe that much of the very broad zone of quartz stockwork and breccia is mineralised with gold and silver. We also detect that there is a consistent zone of high-grade mineralisation within the overall breccia zone. These epithermal systems frequently evolve from hotter fluids producing crystalline quartz textures to cooler fluids more likely to deposit precious metals. Direct evidence for this is the broad zone of quartz stockwork and breccia at Refugio cored by breccias containing more chalcedonic quartz and increased concentrations of gold and silver. These observations direct us to drill deeper in the system to intercept the high-grade breccias as illustrated in the Copalquin District Geologic Model (Figure 1).

Future drilling at the El Refugio target will be to the west where it is open and down dip on the structure to progress deeper drilling. This is also the plan for the high-grade La Soledad target, also part of the Cometa Project where the advance reconnaissance drilling as part of the maiden drill program has directed the future drilling to continue west along strike.

Epithermal gold-silver deposits are typically deep long-life deposits of which there are several large epithermal gold- silver mines in the Copalquin region, namely San Dimas to the south, Palmarejo complex and Pinos Altos complex to the north. All these epithermal deposits have deep long-lived mines. Below in Figure 2, is a composite longitudinal section of Agnico’s Pinos Altos complex in this Sierra Madre Trend showing its initial open pit mines which commenced production in 2009 and the underground development extending 750 metres below surface and resources still open at depth.

The drill rig was moved to the Reyes Project and has completed a total of 5 exploratory holes at the Los Pinos and Los Reyes targets.

The UC Resources news releases were reported to the Canadian market under the NI43-101 guidelines and signed off by a qualified person. The drill results cannot be verified by Mithril and they cannot be used for JORC compliant resource and reserve estimations. The releases are available on the Mithril Resources website under Historic Drilling Reports.

Mithril has operated one man-portable diamond drill rig (HQ size diamond core) in the Copalquin District since late July 2020. Over 7,000m have been drilled in this maiden drill program to test several targets at four projects in the district. To date, the maiden drill program has been highly successful.