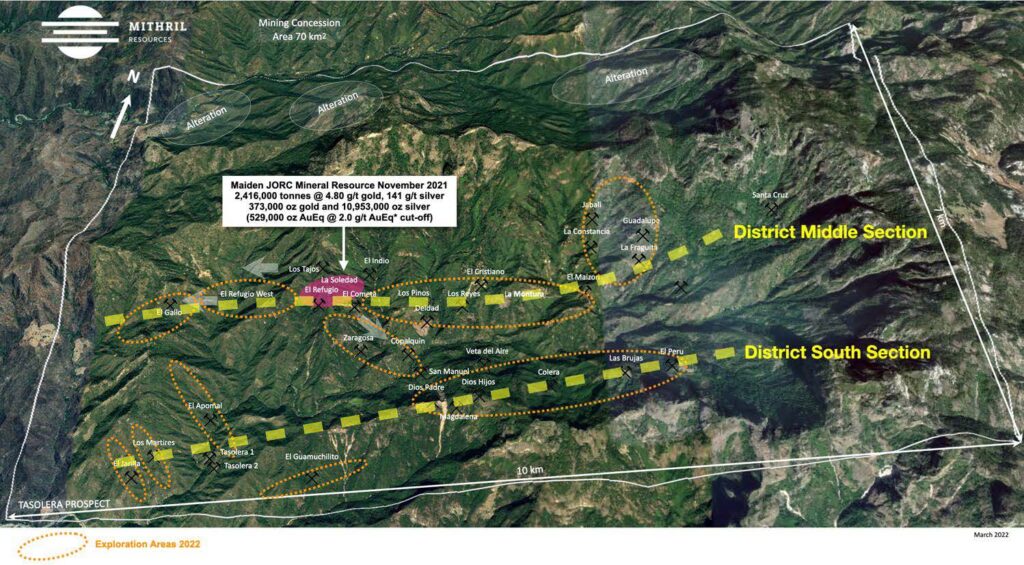 Mithril Resources Ltd (ASX: MTH) (Mithril or the Company) is pleased to provide exploration results for its Copalquin Gold Silver Project in Mexico.

“Our expansive exploration program across the district has delivered excellent results ahead of resource development drilling along strike from the high-grade maiden resource at El Refugio. The vein system at La Soledad has been extended and we have intercepted veins further east of La Soledad and along strike at Los Pinos. Mapping and soil sampling has developed a large new target along the same mineralised trend at La Montura to be drill ready. La Montura, which shares similarities with El Refugio, is 2km along trend within low angle structures extending at least 4 km. Together with planned deep drilling at El Refugio and the confirmed extension at Refugio West, Copalquin is well positioned for significant gold-silver resource growth throughout 2022.”

Drilling at La Soledad and East at Los Pinos

The series of holes completed at La Soledad have clearly shown the existence of a sheeted vein system and association with a granodiorite pre-mineral intrusion. The intrusion of the granodiorite into the favourably- fracturing andesite rock unit, created cracks and voids that later became sites for mineralised deposits. Where there are voids along the gold-silver veins, favourable conditions lead to the formation of high-grade ‘clavos’ (oreshoots) such as the one mined historically at La Soledad and discovered at El Refugio, as part of the maiden resource drilling. The recent drilling and interpretation at La Soledad are guiding the discovery of further clavos and veins along strike and deeper at La Soledad, with highly encouraging results to date.

At Los Pinos, the ridge just to the east of El Refugio-La Soledad, the extensive surface alteration and the strong gold in soils anomaly rank this area as a high-priority target. To date, only a handful of exploration holes have been completed at Los Pinos and importantly, drill hole CDH-113 has intercepted a narrow, high-grade vein only 78 metres down hole. Locating this high-grade vein allows planning of further drilling at Los Pinos as we continue to search of the main source of the alteration and strong surface gold anomaly. The angle and orientation of the vein suggest it may be on the same structure as the La Soledad veins, 700 metres away.

The dry season mapping program (January-May) in the Copalquin District further strengthens data supporting the high prospectivity of the district. Already we have demonstrated the high-quality resource potential of the district with the excellent maiden resource with high-grade gold and silver at El Refugio-La Soledad delivered after only 15 months of drilling. New targets to the east and to the west of Refugio along the trend of rhyolite intrusives are being developed towards being drill-ready for expansion of the resource footprint. The best of these new targets to-date is the La Montura (the saddle) area which has over 500 meters of strike length of silicified rhyolite (highlighted in green, in the figure below. Soil sampling is underway at La Montura in preparation for drilling.

Within 15 months of drilling in the Copalquin District, Mithril delivered a maiden JORC mineral resource estimate demonstrating the high-grade gold and silver resource potential for the district. This maiden resource is detailed below.