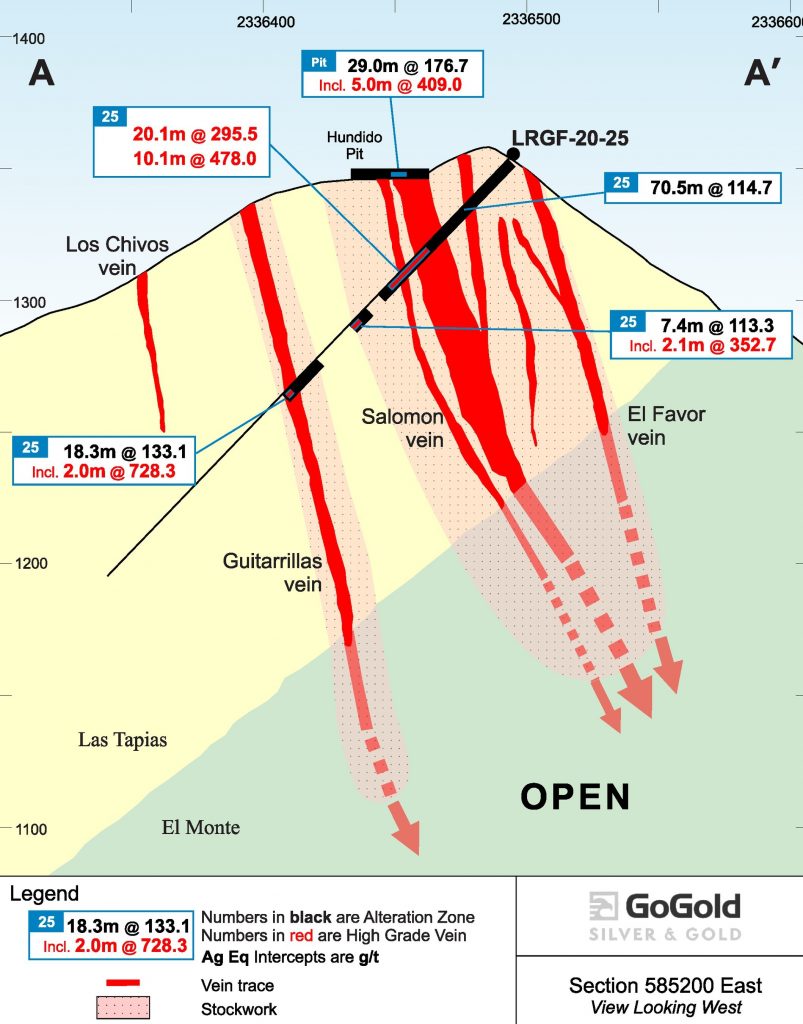 “The El Favor target is demonstrating that not only does it have some high grades in the kilos, but also potentially bulk mineable zones approaching 100m in combined intercepts that are near surface,” said Brad Langille, President and CEO.  “The convergence of three semi-parallel veins on the Favor deposit in the Hundido area giving us widths and grades that could accelerate the growth of resource ounces. Our belief that Los Ricos North is a large mineralized system is strengthened with these results.”

Discussion of Drill Hole Results
Three of the four major veins (Salomon, Guitarrillas and Los Chivos) appear to converge into a 100m wide zone at the western end of the El Favor deposit in the vicinity of the Hundido Pit at an elevation of 1300m.  The wallrock in between the veins is strongly silicified, altered and mineralized.  This mineralization can be observed in outcrop at the Hundido Pit, underground in the Salomon Cross Cut and in the road cuts along the north side of the El Favor hill and in the drill holes. More holes are required in this area to determine the strike length and potential depth of these wide combined zones.

The Eastern end of the El Orito deposit (as presently defined) is located about 800 metres along strike to the west of the Hundido Pit (see Figure 1).  Wide zones of precious and base metal mineralization were cut by drill holes at El Orito (see Press Release dated January 27, 2021) at elevations between 600 to 800m.  Geological mapping, prospecting and sampling programs in the area between El Orito and the Hundido Pit have been accelerated and given priority.

The VRIFY Slide Deck and 3D Presentation for GoGold can be viewed at:https://vrify.com/explore/decks/9404 and on the Company’s website at: www.gogoldresources.com.

The Los Ricos North Project was launched in March 2020 and includes drilling at the El Favor, La Trini, and El Orito targets.  During 2020, GoGold’s exploration team identified over 100 targets on the Los Ricos North properties, demonstrating the significant exploration potential.  The Company plans to drill 10 of these targets as part of its 2021 drilling program which is planned to exceed 100,000 metres of drilling and will be one of the largest in Mexico.

Procedure, Quality Assurance / Quality Control and Data Verification
The diamond drill core (HQ size) is geologically logged, photographed and marked for sampling. When the sample lengths are determined, the full core is sawn with a diamond blade core saw with one half of the core being bagged and tagged for assay. The remaining half portion is returned to the core trays for storage and/or for metallurgical test work.

Quality assurance and quality control (“QA/QC”) procedures monitor the chain-of-custody of the samples and includes the systematic insertion and monitoring of appropriate reference materials (certified standards, blanks and duplicates) into the sample strings. The results of the assaying of the QA/QC material included in each batch are tracked to ensure the integrity of the assay data.  All results stated in this announcement have passed GoGold’s QA/QC protocols.

About GoGold Resources
GoGold Resources (TSX: GGD) is a Canadian-based silver and gold producer focused on operating, developing, exploring and acquiring high quality projects in Mexico.  The Company operates the Parral Tailings mine in the state of Chihuahua and has the Los Ricos South and Los Ricos North exploration projects in the state of Jalisco. Headquartered in Halifax, NS, GoGold is building a portfolio of low cost, high margin projects. For more information visit gogoldresources.com.