(All amounts expressed in US dollars, unless otherwise stated)

Jorge A. Ganoza, President and CEO, commented, “Our San Jose and Caylloma mines have delivered strong production and financial results. Higher operating costs at both operations are expected to recede in the second half of the year and remain within 5% of our annual cost guidance.” Mr. Ganoza continued, “At our Lindero gold project in Argentina, feasibility study optimization work continues to advance as planned in order to support a construction decision next month.”

Net income for the second quarter ended June 30, 2017 was $8.9 million or $0.06 earnings per share compared to a net loss of $1.4 million or $0.01 loss per share. Increase in net income was driven mostly by higher silver and gold production of 36% and 55%, respectively, related to the expansion at the San Jose Mine. Increase in net income was also due to a higher share-based payment charge in 2016 of $7.3 million related to mark-to-market effects on the outstanding restricted and deferred share based units compared to $0.7 million for the second quarter of 2017. Net income in the period was negatively affected by higher foreign exchange loss of $1.1 million and $1.0 million write-down of plant and spare parts at San Jose. 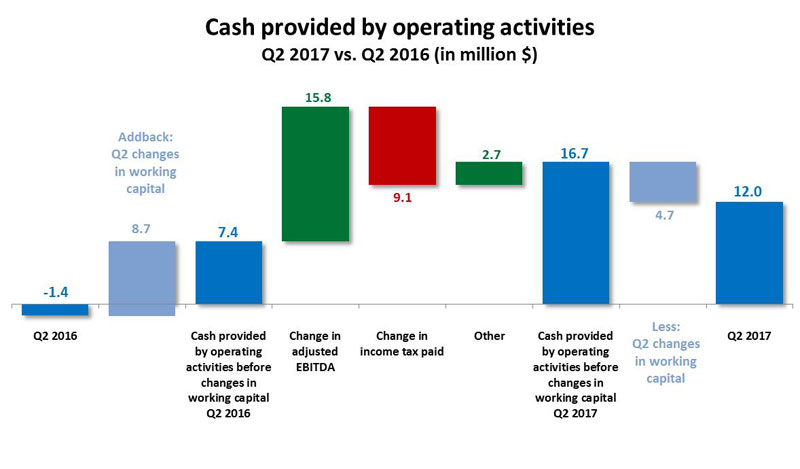 Cash provided by operating activities in the first half of the year was $20.9 million while total capital expenditures (sustaining, non-sustaining, and brownfields) was $23.1 million yielding negative free cash flow of $2.2 million. Cash generation in the semester was mostly impacted by tax payments from 2016 and changes in working capital of $14.3 million.

Silver and gold production at San Jose for the second quarter 2017 increased 53% and 56%, respectively, to 1,887,269 and 14,410 ounces of silver and gold, compared to 1,234,988 and 9,246 ounces produced for the comparable quarter in 2016. The increases were the result of higher throughput from the plant expansion completed at the end of the second quarter of 2016 and increased head grades of 5% and 8% for silver and gold, respectively.

Cash cost per tonne of processed ore for the second quarter 2017 was $61.87; in line with the cash cost for the comparable period in 2016. Compared to annual guidance, cash cost was 9% higher due mostly to short term variations. Cash cost for 2017 is expected to remain within 5% of annual guidance (see Fortuna news release dated January 11, 2017).

All-in sustaining cash cost per payable ounce of silver, net of by-product credits, was $7.15 for the first half of 2017 and was below the annual guidance of $8.40 as a result of higher gold credits and the timing of planned spending on sustaining capital.

Fortuna is a growth oriented, precious metal producer focused on mining opportunities in Latin America. The Company’s primary assets are the Caylloma silver mine in southern Peru, the San Jose silver-gold mine in Mexico and the Lindero gold project in Argentina. The Company is selectively pursuing acquisition opportunities throughout the Americas and in select other areas.

Forward looking Statements involve known and unknown risks, uncertainties and other factors which may cause the actual results, performance or achievements of the Company to be materially different from any results, performance or achievements expressed or implied by the Forward looking Statements. Such uncertainties and factors include, among others, changes in general economic conditions and financial markets; changes in prices for silver and other metals; technological and operational hazards in Fortuna’s mining and mine development activities; risks inherent in mineral exploration; uncertainties inherent in the estimation of mineral reserves, mineral resources, and metal recoveries; governmental and other approvals; political unrest or instability in countries where Fortuna is active; labor relations issues; as well as those factors discussed under “Risk Factors” in the Company’s Annual Information Form. Although the Company has attempted to identify important factors that could cause actual actions, events or results to differ materially from those described in Forward looking Statements, there may be other factors that cause actions, events or results to differ from those anticipated, estimated or intended.