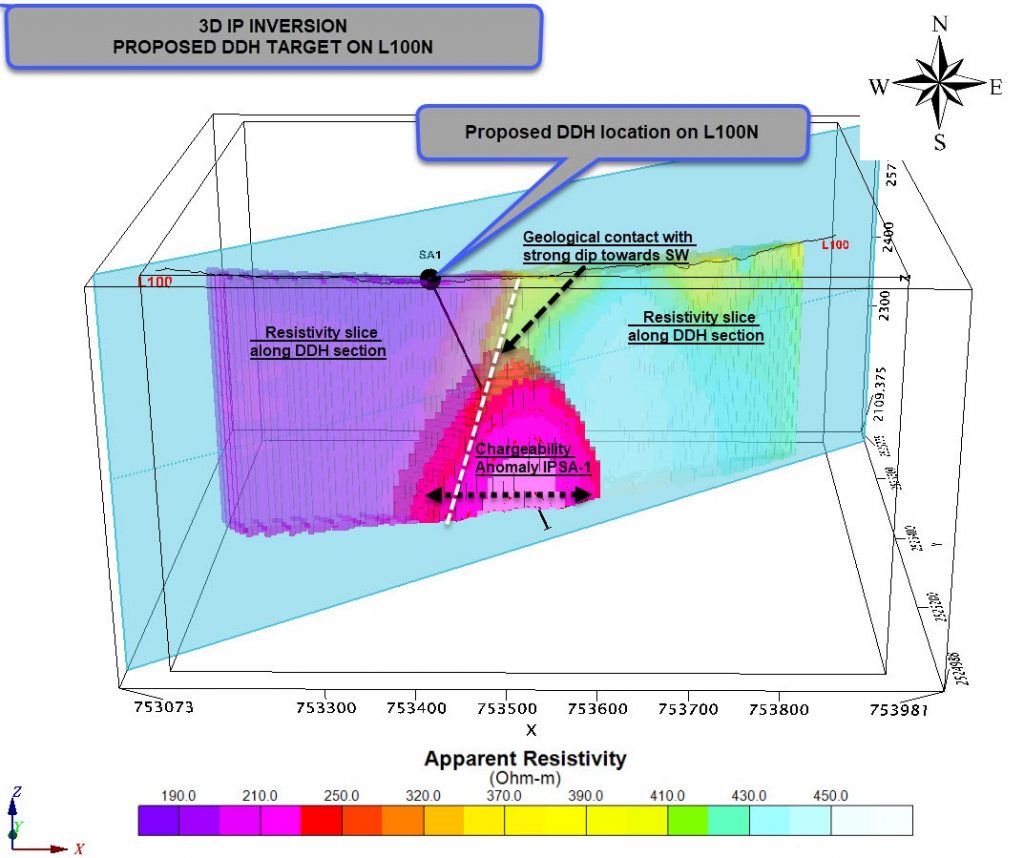 Defiance Silver Corp. (“Defiance”) is pleased to announce the commencement of a drill program targeting a large silver-copper geophysical anomaly located on an under-explored portion of the Veta Grande vein southeast of the San Acacio Silver Deposit in Zacatecas, Mexico.

“We are excited to commence our next round of drilling that will test both new veins and potential high-grade structures at the San Acacio project” stated Peter J. Hawley, Interim President and CEO. “The results from our exploratory ground geophysical surveys identified strong co-incident anomalies on trend with the San Acacio deposit.We believe that due to the size and robustness of these targets, both represent potential game-changers for the project.”

This drill program is designed to test for continuity of the Veta Grande silver and gold vein system (“Veta Grande”) in a significant 450 metre step out southeast from previous drilling and from known historic mine workings. The program will test two new targets identified by an Induced Polarization (“IP”) ground geophysical survey carried out over a selected portion of the 5.6 Km Veta Grande trend that lies within San Acacio project boundaries.

The IP survey (Figure 1), originally contracted to follow up results from the 2017 drill campaign (see Defiance news release date February 28, 2018), successfully detected a strong near surface chargeability anomaly that correlates well with the expected location, strike and dip of the Veta Grande in an area where favourable veining also occurs in outcrop. This survey result corroborates the geological interpretation that the Veta Grande is continuous beneath cover to the southeast.

The IP survey also detected a second anomaly that measures 200 meters long by 300 meters wide, starting at a depth of approximately 200m below surface on the surveyed area. This anomaly was subsequently corroborated independently with an AERI geophysical survey that suggests continuity of the anomaly between 200 and 1,000 metres vertical depth and still open at depth, Figure 2. This deep anomaly position correlates with Cozamin Copper-Silver mine of Capstone Mining Corp’s (TSX:CS) San Rafael zinc zone and Mala Noche Footwall Vein 20 Copper Silver zone, both dipping towards the position of the anomaly. (see, Cormark Securities Inc. April 26, 2019 morning meeting notes.)

The minimum 1,000 metre drill program will test these coincident anomalies, both of which have the potential to host new silver-copper shoots to the south east of the existing San Acacio Silver deposit.Testing these targets will also further Defiance’s understanding of the Veta Grande’s geology as over 4.4 kilometres of the vein remains to be tested. The Property is located seven kilometres north northeast of the City of Zacatecas, Zacatecas State, central Mexico and consists of 1542.95 hectares, covering 5.6Km of strike length along the southeastern parts of the regionally extensive Veta Grande silver vein system. The project was exploited historically in San Acacio mine, along a 1.3 kilometers trend, down to a depth of about 120 metres. An estimate of historic production was calculated by Minera Teck in 1994 of 750,000 to 1 million tonnes mined grading 1 kg/ton silver or better based on available vein widths and stopes records (2012 AGP NI43-101 report). This estimate has not been verified.

The San Acacio Project overlies the Veta Grande, one of the principal hosts to mineralization in the large Veta Grande Mining district. It is classified as a low sulphidation silver-(lead, zinc, copper, gold (Ag-(Pb,Zn,Cu,Au)) epithermal mineralizing system. Productive veins within the district are know to strike up to 16 kilometres laterally. These veins have been exploited since Pre-Columbian times and Zacatecas was one of the principal mining districts in Mexico during the Spanish Colonial period. The more important structures historically include the Panuco, Guadalupe, Veta Grande, San Juan, Malanoche, San Roberto and Cantera veins, among others.

No formal historical production reports exist for the mining district; however, a compilation of the Zacatecas district was completed by Consejo de Recursos Minerales (Cardenas et al 1992), who estimated historical production to be 750 million ounces of silver from 20 million tonnes grading over 900 g/t silver and approximately 2.5 g/t gold. Lead, zinc and copper have also been recovered but neither metal production nor ore grades were estimated (after Bush et al, January 4, 2019, NI43-101 report for Capstone Mining’s Cozamin Mine, located about 5.4KM WSW of the San Acacio Project).

The entire district remains underexplored today, and is currently undergoing a renewed surge in exploration activity. The Consejo de Recursos Minerales was a Mexican Federal government entity. Today it has been renamed as the Servicio Geológico Mexicano; whose website can be accessed via the link: https://www.gob.mx/sgm.

Technical reports and press releases referred to in this email are available on the company website at www.defiancesilver.com.

The Company has granted a total of 990,000 options to Directors, Officers and employees of the Company at an exercise price of $0.195.

Defiance is managed by a team of explorationists and mine developers with a proven track record for discovery and development.

Mr. Peter J. Hawley, P.Geo. Interim President & CEO, of Defiance Silver Corp, is a Qualified Person within the meaning of National Instrument 43-101, and has approved the technical information concerning the Company’s material mineral properties contained in this press release.

On behalf of Defiance Silver Corp.