During the quarter the Scoping Study into recommencing mining at its Plomosas mine in Mexico was completed with positive results at a base-case level as well as several potential areas where returns might be improved. Readers are referred to CZL’s announcement to the ASX dated 27 October, 2017, for full details.

The study focussed on mining the Tres Amigos resource on Level 5 using existing infrastucture.  The Tres Amigos resource curretly comprises a total resource of 544,000 tonnes grading 11.2% zinc, 2.1% lead and 13.9 g/t silver (Table 5).  Of this, 10% falls into the indicated category and the usual cautionary statements apply when considering scoping studies based on inferred resources.

While slightly lower grade than the other resources at Plomosas, this material was prioritised due to its proximity to surface, the ability to immediately access the ore via existing infrastructure, the high (90%?95%) metallurgical zinc recoveries that had previously been identified and the quality concentrate that testwork has established can be obtained.

The strategy underpinning the Scoping Study was to recommission the mine and plant with an early start up at Tres Amigos while optimising and drilling to expand the remaining resource to provide higher grade millfeed in years 2 and 3 onwards.

However, following a review of the Scoping Study results, Consolidated Zinc revised its strategy to expand on the plans considered. This decision was also influenced by the recent positive exploration results and expansions to the project resource, previously announced to the ASX.

Rather than commence small?scale mining as an initial step in 2018, the Company now sees an opportunity to move directly to more significant production in 2019, targeting 200,000 to 250,000+ tonnes per annum over a minimum mine life of 7 to 10 years. 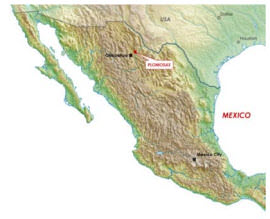 Figure 1. Location of Plomosas mine, Mexico

In conjunction with the planned additional feasibility studies, extensional and infill resource definition drilling at Plomosas recommenced in November, 2017.  They will initially target the Tres Amigos and Tres Amigos North mineralisation using relatively short drill holes with the aims of converting JORC resources classified as inferred to indicated as well as extending the identified resource both up and down dip.

The Tres Amigos North area represents an exciting opportunity for the Company as it is a previously untested and unmined horizon stratigraphically below the mineralised Mina Vieja Manto. Previously announced high grade face sampling results were located in an area that is immediately accessible by existing workings and was not included in the current resource estimate.

Full assay results will be reported when they come to hand in approximately late January or early February, 2018. 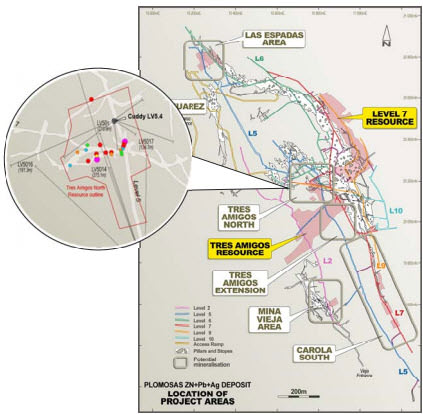 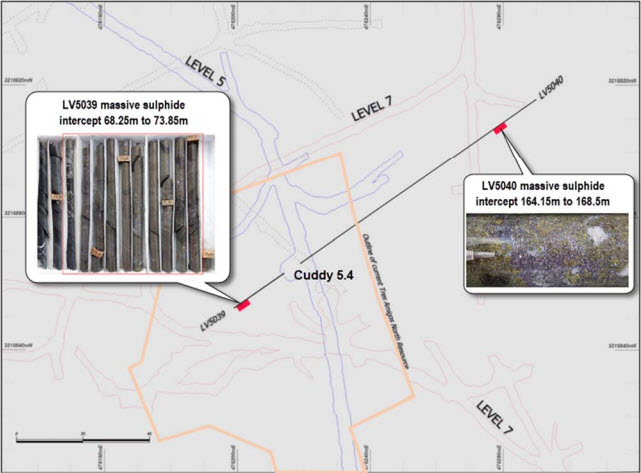 Figure 3. Plan of latest campaign drilling from cuddy 5.4 targeting extensions and infill to the Tres Amigos North resource. LV5039 and LV5040 intersected thick massive sulphides outside of and potentially extending the resource envelope

High grade rock chip results up to 42.72% Zn+Pb were obtained from the firstsystematic mapping undertaken at Juarez Mine, as part of the on?going near mine exploration program.

Additional high grade assay results were also returned from the regional exploration program, particularly the Alfonsitos prospect which obtained results up to 34.96% Zn+Pb, that continue to support the prospectivity of this area.

Juarez Mine is located approximately 550 metres northwest of the Plomosas plant site with easy access from the portal to the mine by road. The mine development remains geotechnically sound, with the majority of the drives and stopes occurring within the competent Juarez Limestone unit, which also hosts the Tres Amigos mineralisation.

Mining was previously undertaken by ASARCO with approximately 77,000 tonnes of high grade ore estimated to have been removed. No systematic exploration has previously been undertaken in this area. 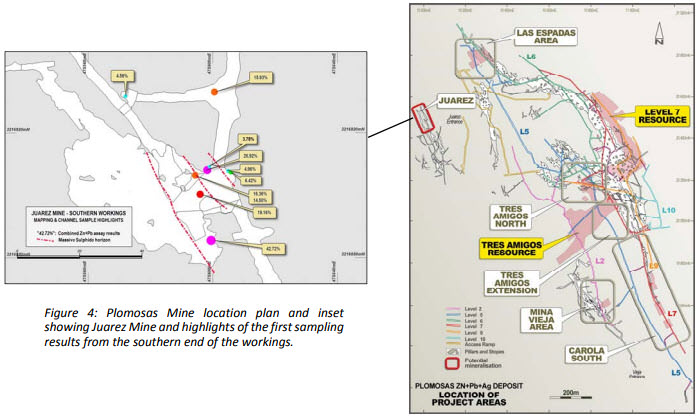 Ongoing work in the area will include;

First pass rock chip sampling at the Alfonsitos prospect in October 2017 returned very good results with grades up to 18.53% and 24.34% Zn+Pb from workings and 15.05% Zn+Pb from outcrop. (refer ASX announcement 9 November, 2017).  Alfonsitos is the first of several prospects identified by reconnaissance exploration and geophysical surveys previously reported to the ASX in November 2016.

Follow up mapping and sampling in the Alfonsitos area during the quarter confirmed those results and returned high values up to 34.96% Zn+Pb from Alfonsitos and 28.75% Zn+Pb from the Mina Mexico prospect, 600m to the north west of Alfonsitos.  Figure 5 and Tables 3, 4 and 7 provide details of the sampling and results in the region.

The area, located north west of the current Plomosas mine, has the same geological setting to the mine itself and displays a similar style of mineralisation at surface.  This provides further encouragement that there is potential for significant new discoveries and additional resource tonnes at Alfonsitos and within the existing tenement portfolio.

This is the first modern exploration undertaken at Alfonsitos, although artisanal shallow workings have been located, which date from pre?1940s.

ASARCO also carried out a limited exploration program in the area in 1976, but despite positive results, no follow up work or drilling was undertaken.

Gossanous units were described as comprising jasperoids and hematite?jarosite?limonites after sulphides. Minor manganese is also noted.

Two structural zones are noted in the area;

Further work in the area will include; 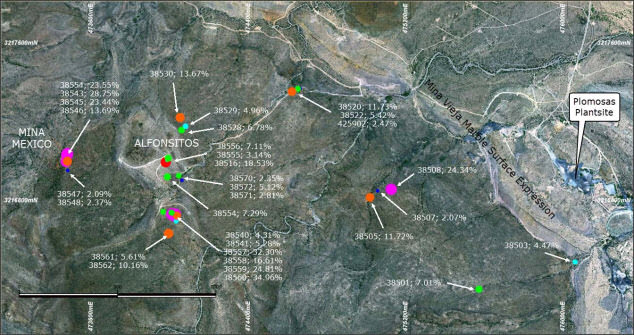 Figure 5: Regional exploration assay results from surface sampling to the north west of Plomosas mine. Mostly rock chip, channel and occasional dump samples are shown. Samples up to #38541 were previously announced to the market on 9 November, 2017

Resignation of Managing Director and Board changes

The Company undertook a review of its organisational and technical structure as it increases its focus on near term production. This is designed to make sure the experience and skill set of management will meet the future requirements of the company as it moves to project development.

Managing Director Will Dix elected to step down and continued in his role until the end of 2017 to assist the Company through this transition period.  Mr Andrew Richards will be the interim Managing Director while this restructure is undertaken.  Mr Richards is already an Executive Director of the Company having held that role since June 2015.

On 22 January, 2018, Mr Eduardo Valenzuela was appointed to the Board as Technical Director. Mr Valenzuela is a mining engineer with extensive technical and corporate experience in underground and base metal projects around the world, particularly in Latin America.

Consolidated Zinc Limited (ASX:CZL) is a minerals exploration company listed on the Australian Securities Exchange. The Company’s major focus is in Mexico where it recently acquired 51% of the exciting high grade Plomosas Zinc Lead Silver Project through its majority owned subsidiary, Minera Latin American Zinc CV SAPI.   Historical mining at Plomosas between 1945 and 1974 extracted over 2 million tonnes of ore grading 22% Zn+Pb and over 80g/t Ag.  Only small scale mining continued to the present day and the mineralised zones remain open at depth and along strike. The Company’s main focus is to identify and explore new zones of mineralisation within and adjacent to the known mineralisation at Plomosas with a view to identifying new mineral resources that are exploitable.

The information in this report that relates to exploration results, data collection and geological interpretation is based on information compiled by Steve Boda BSc (Hons), MAIG, MGSA, MSEG and Andrew Richards BSc (Hons), Dip Ed, MAusIMM, MAIG, MSEG, GAICD.  Messrs Boda and Richards are both Members of Australian Institute of Geoscientists (AIG) and Mr Richards is also a Member of the Australasian Institute of Mining and Metallurgy (AusIMM).

The information in this document that relates to the interpretation of metallurgical test work, process plant and infrastructure design for a Scoping Study level assessment is based on information compiled and reviewed by Mr David Pass, who is a Member of the Australasian Institute of Mining and Metallurgy.  Mr Pass is an employee of BatteryLimits.  Mr Pass consents to the inclusion in the report of the matters based on the reviewed information in the form and context in which it appears.

The information is extracted from the report entitled “70% Increase in Zinc Resource, Positive Metallurgical Testwork Results” created on 4 September, 2017 and is available to view on the Company’s and ASX websites. The Company confirms that the form and context in which the Competent Person’s findings are presented have not been materially modified from the original market announcement. 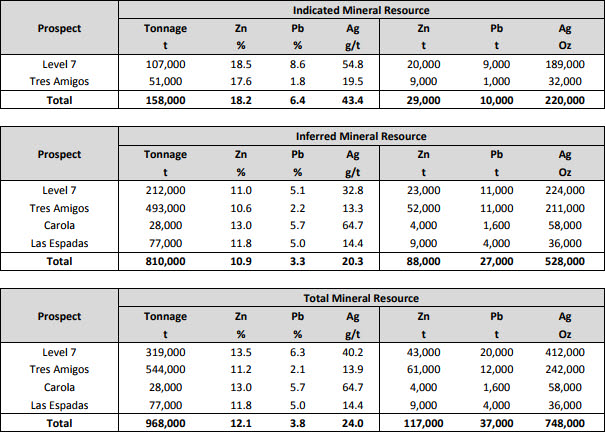 The Mineral Resource has been compiled under the supervision of Mr. Robert Dennis who is a full?time employee of RPM and a Member of the AIG and AusIMM.  Mr. Dennis has sufficient experience that is relevant to the style of mineralisation and type of deposit under consideration and to the activity that he has undertaken to qualify as a Competent Person as defined in the JORC Code.

All Mineral Resourcesfiguresreported in the table above represent estimates at September, 2017.  Mineral Resource estimates are not precise calculations, being dependent on the interpretation of limited information on the location,shape and continuity of the occurrence and on the available sampling results.  The totals contained in the above table have been rounded to reflect the relative uncertainty of the estimate. Rounding may cause some computational discrepancies.

The Mineral Resource has been estimated in accordance with the 2012 Edition of the ‘Australasian Code for Reporting of Exploration Results, Mineral Resources and Ore Reserves’ prepared by the Joint Ore Reserves Committee of The Australasian Institute of Mining and Metallurgy, Australian Geoscientists and Minerals Council of Australia (The JORC Code 2012). 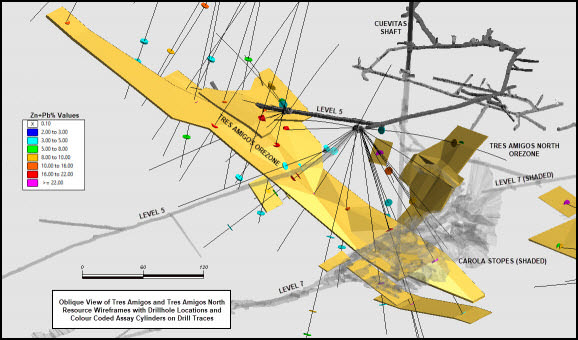