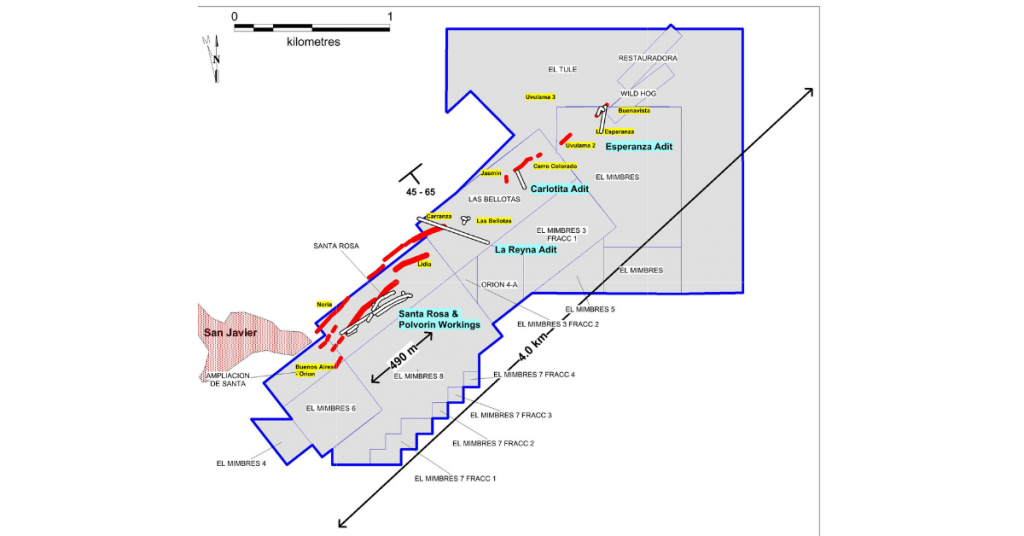 The current work program has been focused on the eastern and northeast part of the project covering an area that was previously unexplored by the Company. The area of coverage includes the recently acquired, and previously underexplored, El Tule claim. The work program encompassed reconnaissance geological mapping and rock sampling. Geological mapping has determined that the eastern part of the San Javier Project is underlain mainly by Triassic aged Barranca Group sandstones and siltstones that are cut by abundant zones of hydrothermal breccia. The matrix to these breccias consists mainly of iron oxide (magnetite, hematite) and related hydroxides (limonite, goethite) with local quartz, carbonate and barite. The mineralogy suggests that the breccia zones may represent the lower part of a large, magmatic hydrothermal system. The breccia zones locally contain relatively narrow (up to 1.5 metres) lenses consisting of massive magnetite matrix material with bonanza grade Ag and elevated Cu.

The work program has identified these swarms of iron-matrix breccia over a large area measuring 900 by 1,200 metres which remains open laterally in an unmapped area of the Company’s claims. One of the individual breccia zones in this area measures from 30 to 70 metres in width and has been traced for approximately 800 meters along strike. It occurs adjacent to two fault structures.

To date 267 rock samples have been collected from bedrock exposures, old trenches and small underground mine workings found within the iron-matrix breccia area. Assay results are available for the first 157 of these samples. Values range from trace to 2,859 g/t Ag (80 ounces) and from 74 ppm to 0.59% Cu. Of the first 157 samples analysed by ICP methods, 35 exceeded the maximum detection limit for Ag (+100 g/t Ag) and were re-assayed by Fire Assay methods. The bonanza grade Ag values and the higher Cu values are from several of the high magnetite (>40% Fe) bearing cross structures. Several of these mineralized zones have been exploited by small scale artisanal miners.

The work program will continue mapping and sampling on the Company’s center to eastern claim area where the property appears to be underlain by the iron-matrixed breccia zones. There is approximately 800 meters of unmapped ground between the current mapping grid and the Company’s property boundary. This property boundary is contiguous with a claim group containing two previously identified Cu deposits – Mesa Grande and La Trinidad – explored in 2007 by Constellation Copper Corp. These deposits were considered to be the upper levels of an iron oxide-copper-gold (IOCG) deposit type.

All samples were channel samples ranging in width from 0.1 to 3.0 metres in thickness. Sample locations are spray painted and marked by aluminum tags in the field and the samples are placed in plastic bags with the appropriate sample tag; sample numbers are also written on the outside of the bags; locations are acquired by GPS and recorded at the site along with sample descriptions. They are then stored at a secure site until delivered directly to the certified laboratory of Bureau Veritas in Hermosillo, Mexico. All samples were assayed for Au by Fire Assay, AA finish in Hermosillo and all over-limit samples assayed for Au and Ag by Fire Assay, Gravimetric finish. All samples were analysed by Aqua Regia digestion, ICP methods for 33 elements in the Bureau Veritas laboratory in Vancouver, BC, Canada.

Seymour M. Sears, B.A., B.Sc., P.Geo. is the Qualified Person for the Company, as defined by NI 43-101, and has reviewed and approved the contents of this press release.

Canuc is a junior resource company holding the San Javier Silver-Gold Project in Sonora State, Mexico. The Company generates cash flow from natural gas production at its MidTex Energy Project in Central West Texas, USA where Canuc has an interest in eight producing gas wells and has rights for further in field developments. Canuc also has exclusive rights, through a Partnership Agreement with Ioticiti Networks Inc., to sell Industrial IoT applications and infrastructure in the Provinces of Alberta and Saskatchewan, Canada and in the State of Texas, USA.

When used in this news release, the words “estimate”, “project”, “anticipate”, “expect”, “intend”, “believe”, “hope”, “may” and similar expressions, as well as “will”, “shall” and other indications of future tense, are intended to identify forward-looking information. The forward-looking information is based on current expectations and applies only as of the date on which they were made. The factors that could cause actual results to differ materially from those indicated in such forward-looking information include, but are not limited to, the ability of the Corporation to fund the exploration expenditures required under the Agreement. Other factors such as uncertainties regarding government regulations could also affect the results. Other risks may be set out in the Corporation’s annual financial statements, MD&A and other publicly filed documents.