*Refer Tables 2, 3 & 4 for full details of the Mineral Resource

The Oposura Mineral Resource estimate (MRE) has been estimated and classified as Indicated and Inferred Mineral Resources in accordance with the requirements and guidelines of the JORC Code (2012)3 by CSA Global Pty Ltd (CSA Global), Perth, Western Australia (refer ASX announcement dated 4 July 2018).

Significantly, 75% of the contained metal is classified in the Indicated Mineral Resource category (refer Tables 1 & 2), providing confidence in the continuity of grade and widths of the mineralisation.

Mineral Resources have been reported at different cut-off grades (refer Tables 3 & 4) considered applicable for various open pit and underground mining options being assessed in the mining study for the Preliminary Economic Assessment (PEA), which is expected to be reported in September.

The initial Mineral Resource shows potential for future expansion as the mineralisation remains open in several directions (refer Figures 1 & 2). The most obvious area for expansion is the Central Zone, a 500mwide zone situated between the East and West Zones. This area has been only lightly tested by historical drilling and the mineralised horizon is present in several drill holes. Additional upside potential is also present to the north of the Mineral Resource.

Further drilling is planned in 2018 to upgrade the resource classifications, expand the Mineral Resource, and explore the wider property.

*Zinc Equivalency % US$:
Equivalent values in US$ are determined by the following factors:

Further drilling is planned in 2018 to upgrade the resource classifications, expand the Mineral Resource, and explore the wider property. 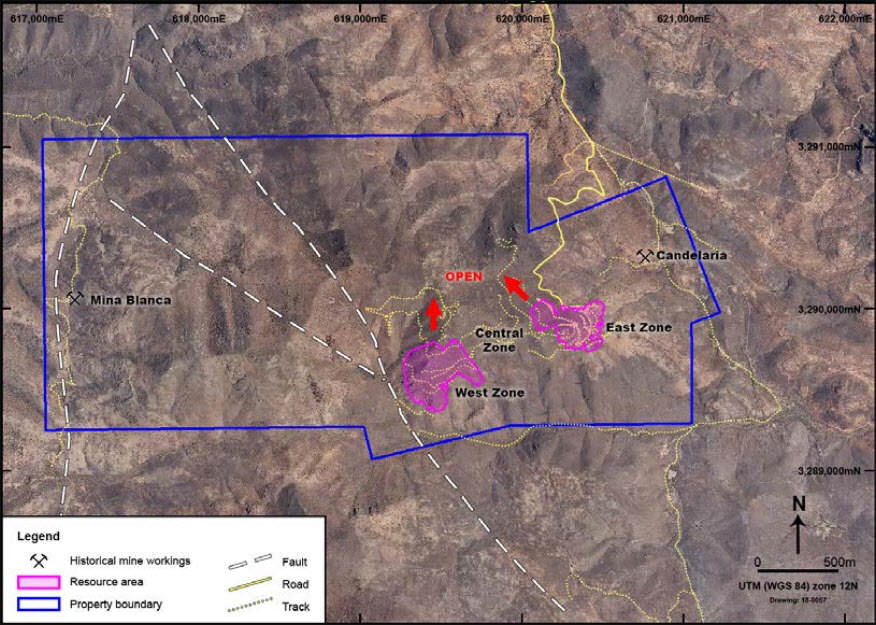 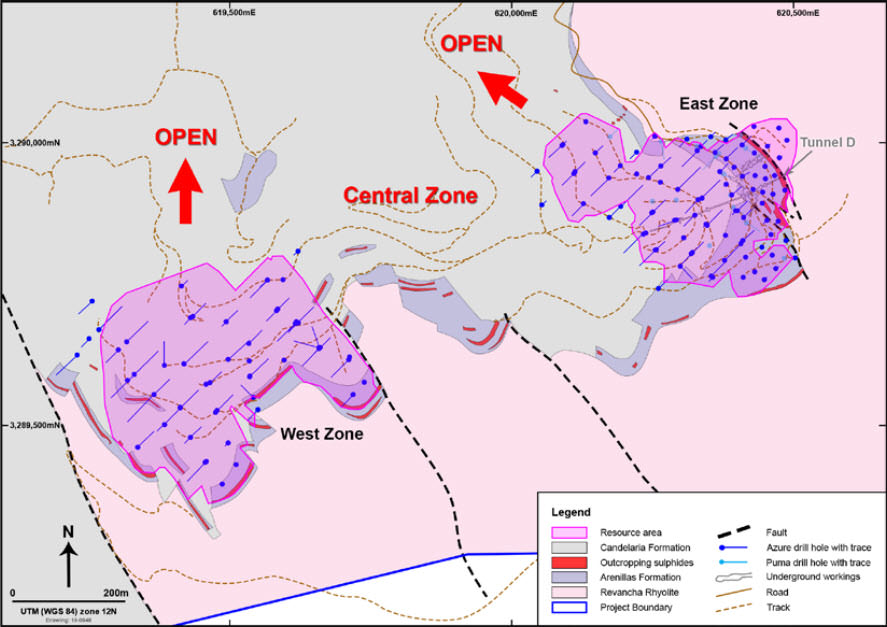 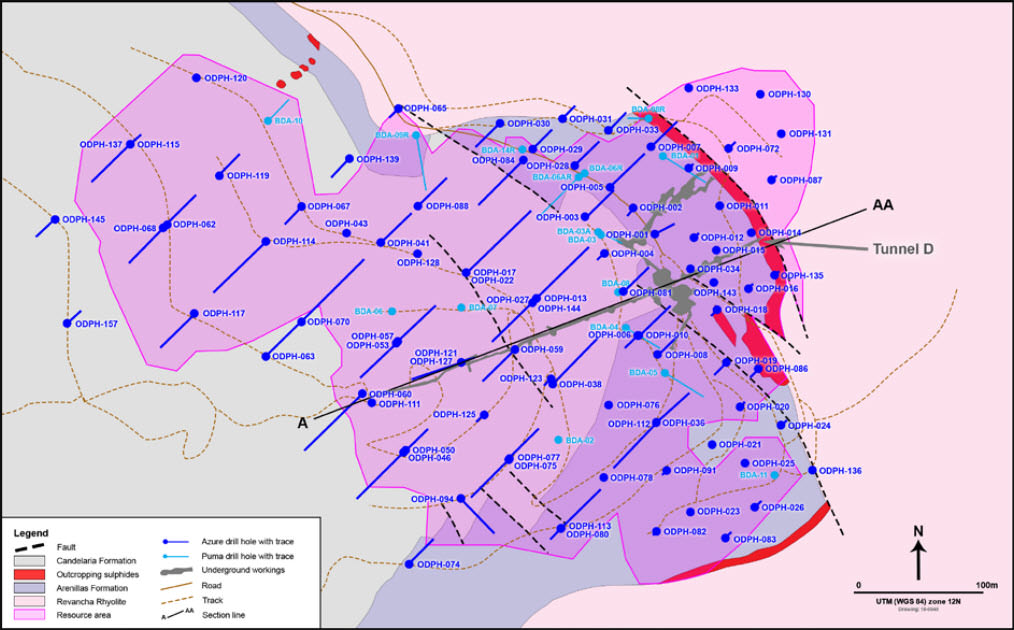 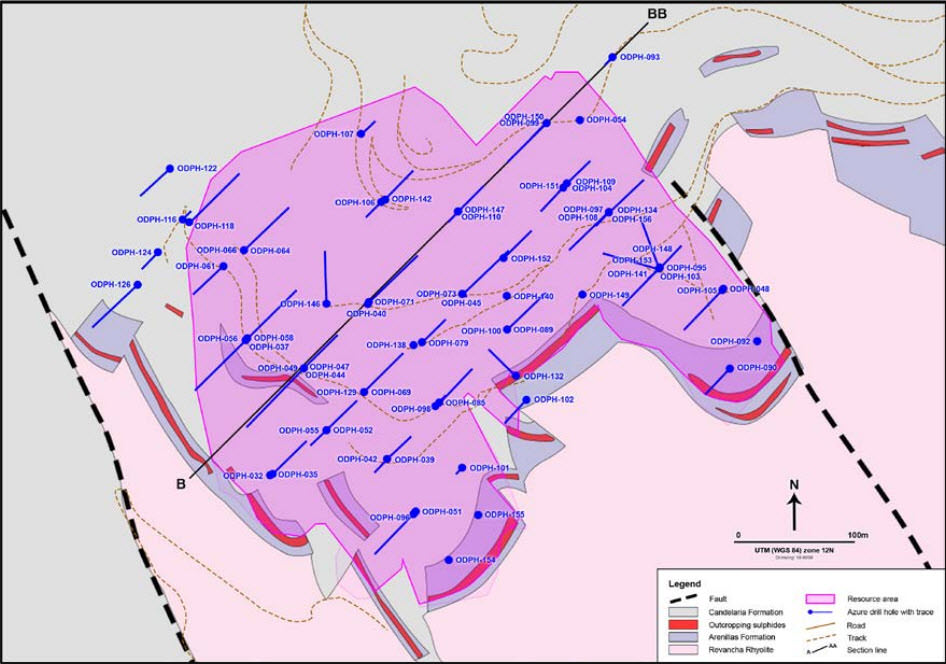 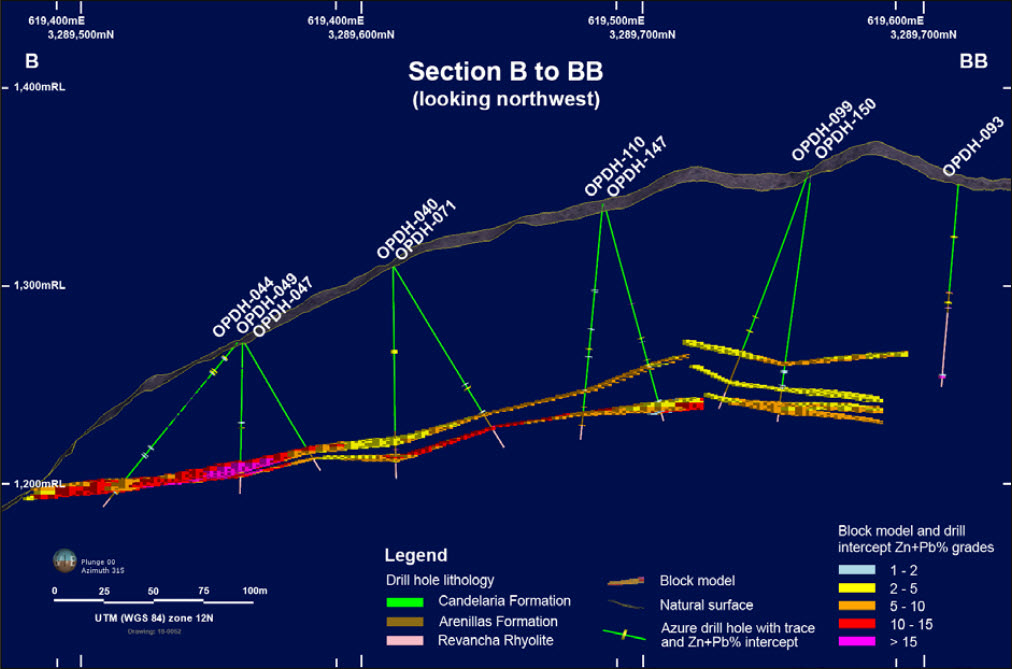 The overall geometry of East Zone and West Zone Mineral Resources is favourable for potential extraction using a combination of conventional open pit and underground mining techniques. This geometry also allows the resources to be easily be accessed from surface, providing exceptional mine scheduling flexibility. Distinct areas of higher grade mineralisation are present that could be scheduled to suit economic circumstances and/or product marketing options.

East Zone and West Zone resources crop out at surface in both zones. The extremities of both resource zones could be accessed by a maximum of 200m (East Zone) and 250m (West Zone) of lateral underground mine development. This mine development could be undertaken within mineralisation due to the overall shallow dipping nature of the mineralised horizon. Mining could be undertaken concurrently by both open pit and underground methods in both East Zone and West Zone.

East Zone and West Zone are separated by the approximately 500m-wide Central Zone, which has been only lightly tested by historical drilling undertaken by Anaconda and Peñoles during the 1960s and 1970s. Several of these historical drill holes intersected zinc and lead sulphide mineralisation. Azure is planning further drilling to test the Central Zone which, if successful, has the potential to expand the Mineral Resource.

In several parts of the Oposura mineralised system, thick mineralised intersections comprise narrow bands of very high-grade mineralisation separated by intervals of lower grade or waste material. Azure’s studies indicate that some of these thick mineralised zones may be more suitable to a “bulk” mining approach rather than “selective” mining, thereby reducing unit operating costs and maximising resource recovery.

Testwork was undertaken to assess the suitability of DMS technology to upgrade the grade of the “bulk” mined material by rejecting low grade and waste material while retaining the mineralised material, ahead of entering the milling circuit. DMS is most effective in upgrading ore when there are distinct density differences between mineralised material and waste rock, and this is the case at Oposura.

DMS testwork was initially conducted on rock samples taken from historical underground mine workings. DMS testwork was then extended to include tests on individual drill hole intersections of varying combined zinc and lead grades and zinc to lead grade ratios. These tests were used to ascertain the density at which the DMS circuit could optimise ore recovery and waste rejection.

Follow-up DMS testwork was then conducted on a bulk master sample averaging 6.4% Zn, 4.2% Pb and 28.8g/t Ag that was prepared from the drill core of eleven Mineral Resource drill holes. This testwork showed that an upgrade in both zinc and lead grades of 34% could be achieved with an overall metal recovery of 95%, while rejecting waste material amounting to approximately 30% of the mass entering the DMS circuit.

The positive results achieved from this metallurgical testwork demonstrate that crushing, screening and DMS processing prior to a standard sulphide flotation treatment support the option of utilising DMS technology at Oposura.

Multi-element assays were conducted on the separate zinc and lead concentrates produced from the locked cycle test conducted on the bulk master composite. These assays indicated that deleterious elements were not present at levels that would cause concern or penalties from smelters.

The testwork successfully demonstrated that clean, commercial grade concentrates could be produced at high metallurgical recoveries and thereby has eliminated a potential major project risk.

The campaign was designed to test for extensions to the high-grade gold and cobalt mineralisation identified by its 2017 maiden drilling program, which intersected up to 26.2m @ 9.5g/t Au and 1.26% Co (refer ASX announcements dated 27 November and 7 December 2017).

The high-grade cobalt mineralisation is hosted within a shoot of massive and semi-massive sulphides that outcrops near the top of the Sara Alicia hill and plunges at a shallow angle towards the northwest (see Figures 7 & 8). This sulphide-rich shoot also contains high grade gold mineralisation, while drilling confirmed that gold is widespread in the rocks of the surrounding skarn system.

Historical mining within the upper 40m exploited some of the highest-grade material but drilling and inspection of the mineralised system within the old mine workings indicate that the shoot continues at depth towards the northwest. Azure considers that this sulphide-rich mineralisation may represent a feeder zone sourced from the underlying porphyry that extends upwards into the overlying limestone, now skarn, horizon.

The massive and semi-massive sulphides forming the mineralised shoot provide an opportunity to explore for extensions of the gold and cobalt mineralisation by utilising geophysical techniques to trace the subsurface dimensions and orientations of the mineralised zone. 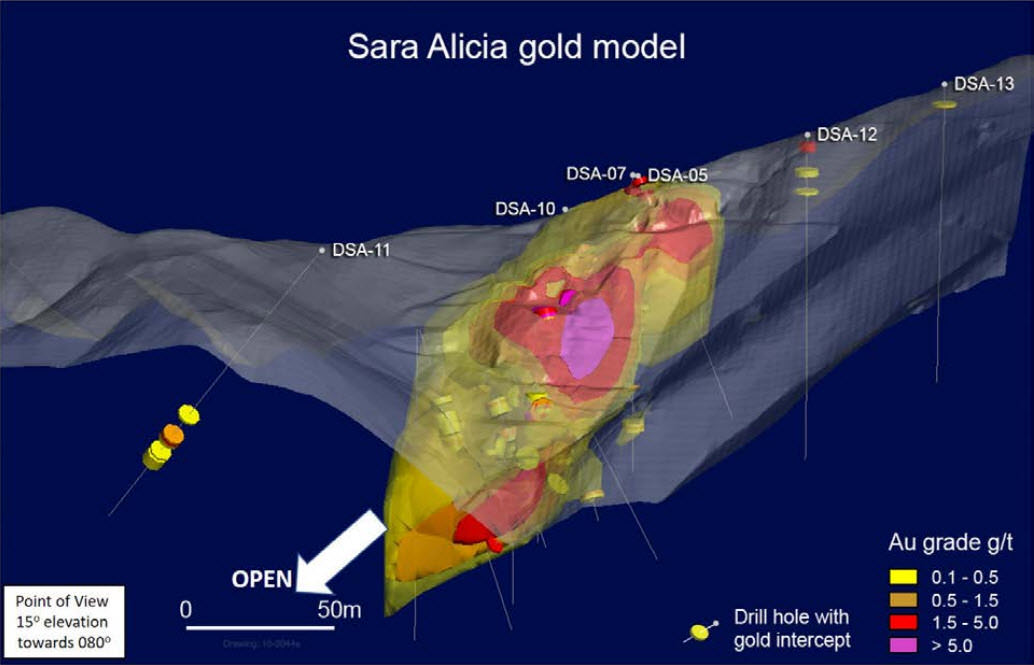 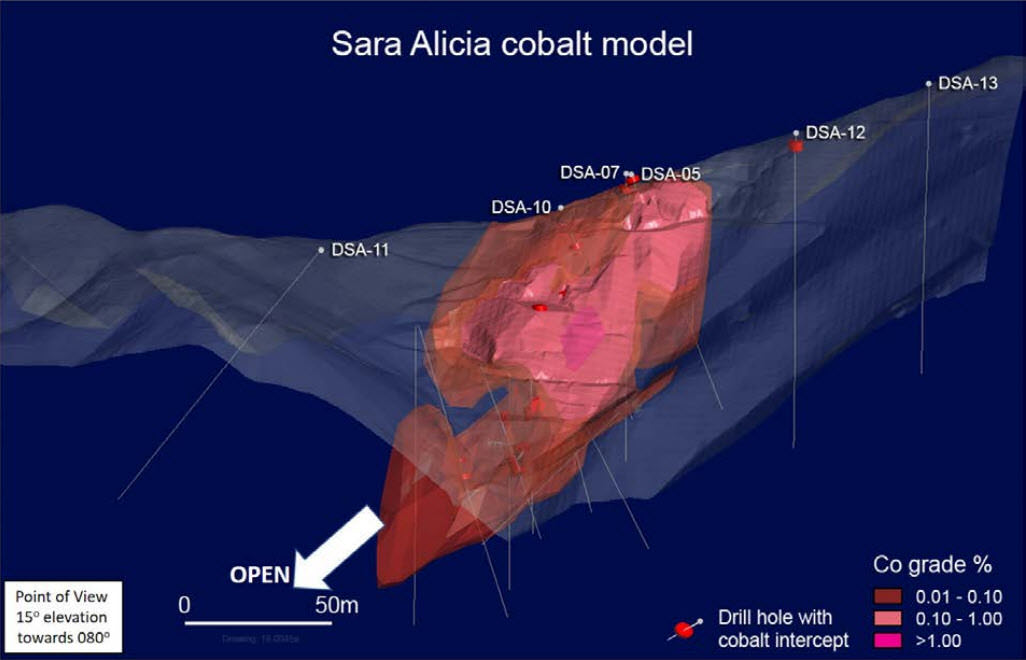 Project operator Minera Teck S.A. de C.V. (“Teck”), a 100%-owned subsidiary of Canada’s largest diversified resource company, Teck Resources Limited, is currently earning back into the project. Work conducted during 2017 represents the initial year of activity in a total four-year program comprising the first Option which will entitle Teck to earn back a 51% share of the project by sole-funding US$10 million of exploration expenditure and making cash payments to Azure totalling US$500,000.

Upon reaching an initial 51% interest in the project, Teck may exercise the second Option to further increase its interest to 65% by sole funding an additional US$5 million in expenditures over a further two years and making cash payments to Azure totalling an additional US$1.5 million. In this case, Azure will retain a contributing 35% interest in the Alacrán project. Grupo Mexico retains a 2% NSR royalty.

Teck advised Azure in December 2017 that it had completed its first diamond drilling program at Alacrán, comprising 14 holes for 4,907m (for results, refer ASX announcement dated 10 May 2018).

Drilling in the Loma Bonita – Cerro San Simon Corridor demonstrated potential for gold and silver mineralisation, given the presence of zones of silicification covered by fresh rock and high-resistivity geophysical anomalies extending to depth.

Teck has informed Azure that it will be continuing its exploration at Alacrán. The Year 2 work program includes additional geological, geochemical and geophysical surveys in the first half of 2018 followed by more diamond drilling in the second half of the year. 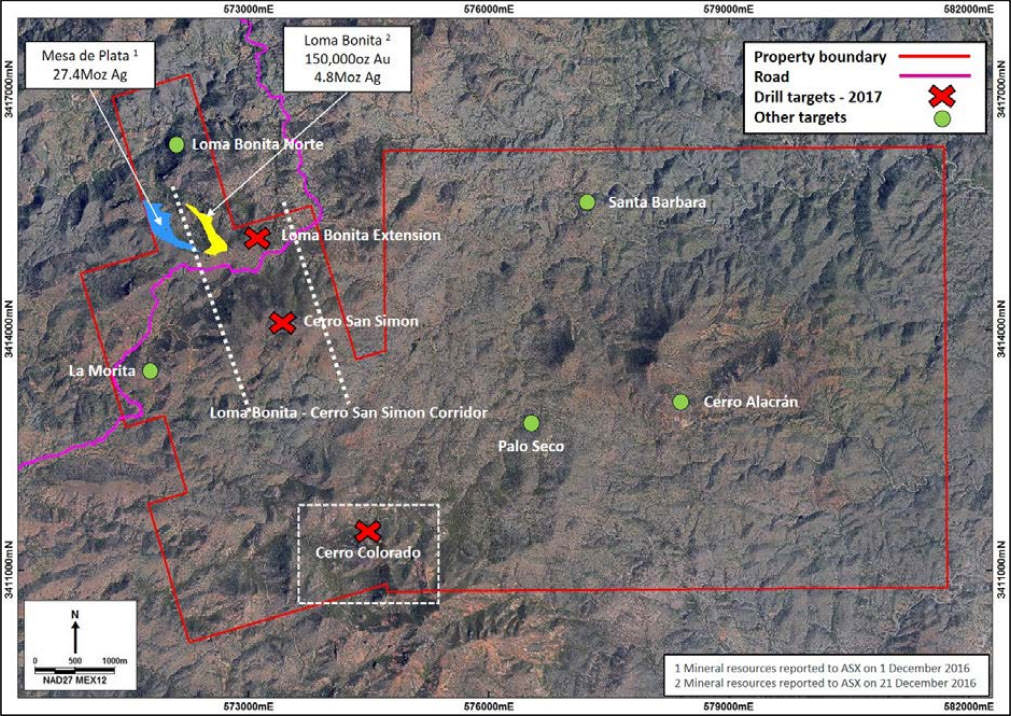 No work undertaken. Azure continues to seek a partner for further exploration on this project.

Information in this report that relates to previously reported Mineral Resources has been crossed-referenced in this report to the date that it was reported to ASX. Azure Minerals Limited confirms that it is not aware of any new information or data that materially affects information included in the relevant market announcements.