Azucar Updates on Intended Resumption of Activities at the El Cobre Project, Mexico 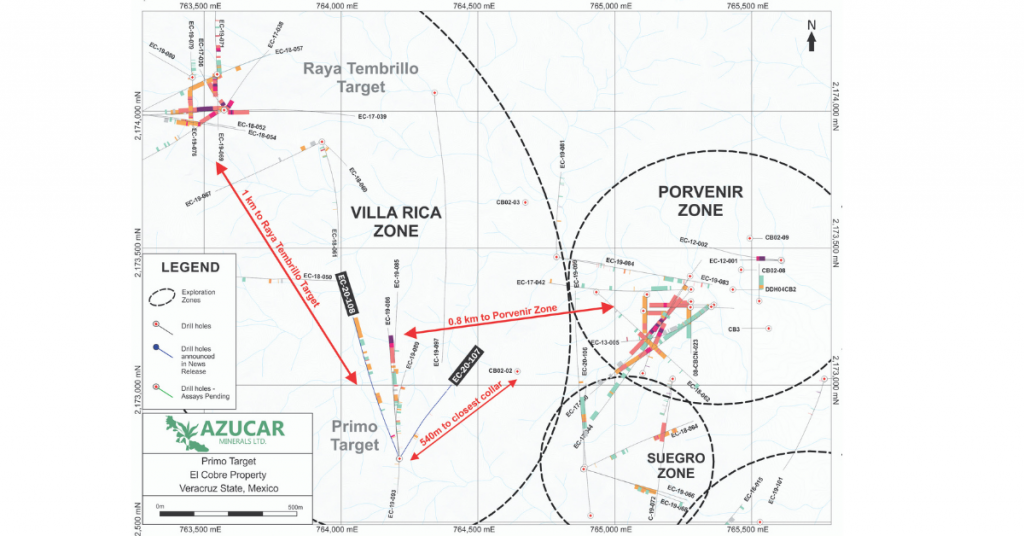 The Company has recently received approval from the Mexican health authority to resume operations and is currently preparing its facilities and implementing the health protocols required to enable a safe return to work. Upon return to work, the Company plans to deepen hole EC-20-108 which was stopped due to the COVID-19 outbreak. The mineralisation intersected at the bottom of the hole at the time drilling was suspended is interpreted to be potentially adjacent to or above the target area based on geophysics.

The Company has also been working towards announcing an initial resource estimate for the Norte Zone of the property.

A plan diagram for the drilling results reported today is provided with this news release and highlights include the following intervals:

J. Duane Poliquin, Chairman of Azucar commented, “We continue to push on with our comprehensive two year intensive drill program at the El Cobre project. The drill program has identified multiple zones of porphyry mineralisation within a large area of hydrothermal alteration. The footprint of the system is very large and future work will be focused on searching for the core feeder zones of this large system.”

The El Cobre Project has a total area of approximately 7,000 hectares and is located adjacent to the Gulf of Mexico, about 75 kilometres northwest of the major port city of Veracruz, Mexico in an area of excellent infrastructure. The project is situated 200 metres above sea level with extensive road access and is located less than 10 kilometres from a power plant, highway, gas line and other major infrastructure. Major power lines cross the property area.

The five copper-gold porphyry zones within the El Cobre Project are known as NORTE, VILLA RICA, EL PORVENIR ENCINAL and SUEGRO, and are defined by distinct Cu-Au soil anomalies, discrete, positive magnetic features and a large IP chargeability anomaly. The largest zone is the VILLA RICA ZONE which has only seen limited initial exploration drilling. An overview of drilling to date in the various zones is provided below.

VILLA RICA ZONE: The Villa Rica Zone is a roughly 2.5 kilometre by 1 kilometre area of hydrothermal alteration defined also by a strong north-northwest trending magnetic-chargeability high and associated copper-gold soil geochemical anomalies. Past mapping and sampling defined several areas of exposed porphyry mineralisation within the Villa Rica zone, including the Raya Tembrillo target and the Naranjo target, both at the north end of the Villa Rica zone. Initial drilling in 2017 on the Raya Tembrillo target intersected two styles of mineralisation; hypogene copper-gold porphyry mineralisation (115.00 metres of 0.57 g/t gold and 0.27% copper, see press release of November 28, 2017) and near surface exotic enriched copper mineralisation with an apparent tabular distribution (94.00 metres of 1.36% copper; see press release of December 13, 2017). The Primo target area, first announced on October 16, 2019, is also considered to be part of the Villa Rica zone, and is located approximately 1km from Raya Tembrillo.

ENCINAL ZONE: Hole CB5 intersected a highly altered breccia pipe containing fragments of stockwork veining and porphyry mineralisation across which 18.28 metres returned 1.42 g/t Au and 0.10% Cu. The breccia pipe occurs in a large alteration zone, IP chargeability high and magnetics low which has not been tested to depth. On June 19, 2017 Azucar announced that a new area of exposed stockwork quartz veining and gold mineralisation had been identified in the Encinal Zone. On June 29, 2017 Azucar announced the results of initial drilling on this exposed stockwork (Hole EC-17-025) which returned results including 34.47 metres grading 0.73 g/t Au and 0.20% Cu.

SUEGRO ZONE: Recent 2019 drilling has identified a new porphyry centre between the El Porvenir and Encinal Zones. The Suegro Zone is located approximately 250 metres south of the Porvenir Zone, within a large area of alteration associated with more subdued magnetics, and low zinc and manganese in soil.   The Suegro mineralisation intersected in the drilling to date is associated with an altered (locally intense phyllic alteration overprinting potassic) intrusive. Intercepts to date include 28.20 m of 0.54 g/t Au and 0.17% Cu (hole EC-19-064; see press release of March 19, 2019).

More information on El Cobre is available on the Azucar website at http://www.azucarminerals.com.

Mr. Norm Dircks, P.Geo., is a Qualified Person as defined by National Instrument 43-101 (“NI 43-101”) and has reviewed and approved the contents of this news release. The porphyry mineralisation reported in this news release is associated with broad areas of alteration and stockwork veining. True widths cannot be determined at this time. The analyses reported were carried out at ALS Chemex Laboratories of North Vancouver using industry standard analytical techniques. For gold, samples are first analysed by fire assay and atomic absorption spectroscopy (“AAS”). Samples that return values greater than 10 g/t gold using this technique are then re-analysed by fire assay but with a gravimetric finish. For copper, samples are first analysed by Inductively Coupled Plasma – Atomic Emission Spectroscopy (“ICP-AES”), with four acid digestion. Samples that return values greater than 10000 g/t copper using this technique are then re-analysed by HF-HNO3-HCLO4 digestion with HCL leach and ICP-AES finish.  Blanks, field duplicates and certified standards were inserted into the sample stream as part of Azucar’s quality assurance and control program which complies with National Instrument 43-101 requirements. A NI 43-101 compliant technical report on the El Cobre project entitled, “Technical Report on the El Cobre Property” was filed in May 2015 and can be obtained from www.sedar.com.

Azucar is an exploration company with a mandate to thoroughly explore the El Cobre project in Veracruz, Mexico, which covers multiple gold-rich porphyry targets, as demonstrated by recent drilling. Azucar is permitted and funded for drilling in 2020. Azucar holds a 100% interest in the El Cobre project, subject to net smelter returns (“NSR”) royalty interests, assuming production from the property exceeds 10,001 tonnes per day of ore, totaling 2.25% which can be reduced to 2.0% though the payment of US$3.0 million.