Please refer to the attached a map which depicts various zones of interest on approximately 120 acres of USPR's 37,000 acre concession, www.usprgold.com/exploration/maps.

The following is a brief description of 4 of the zones referenced above within the 120 acres:

Northwest Zone: [2010: 3 holes, 2015: 7 holes (#1-7)] In 2010, we did not encounter high grade intercepts in this zone. During our recent campaign, we had intercepts as high as 39 g/t Au and 2-3% Cu (1). Previously, we believed the "North Zone" was separated from the "Main Zone" by a fault because of the orientation of the quartz sulfide veins exposed on the surface. However, our recent drilling results lead us to conclude that this mineralized zone appears to be connected with the "Main Zone." This area is located approximately 220 meters from the closest point of the "Main Zone."

East Zone: [2015: 5 holes (#14-18 & 24)] We were unable to reach this area in prior drilling campaigns due to the lack of accessibility. New road construction during the recent drilling campaign allowed access to this area. We had intercepts as high as 25.56 Au and 129 Ag 7.97 % Cu(1). This area has been of interest due to exposed quartz sulfide veins of approximately 20 meters. This area is located approximately 300 meters south and east of the closest point in the "Main Zone."

The purpose of the 2015 campaign was to expand known areas of mineralization from prior drilling, which in turn would enable USPR to complete a resource estimate of mineralization. Prior to our recent drilling, we did not have sufficient information to make a geologic connection of the Northwest, East and West Zones to the Main Zones. The recent drilling, however, has yielded geologic characteristics in Northwest, East and West Zones, which are similar in nature to that of the "Main Zone." These characteristics lead us to reasonably conclude that there appears to be a geologic continuity between Northwest, East and West Zones to the "Main Zone." In addition, based upon results from 2010, management believes the same geologic continuity exists between the "Main Zone" and the "Southern Zone" (See attached Map –www.usprgold.com/exploration/maps).

Dave Burney, the Company's Chief Geologist stated: "Overall, our results to date in this 2015 drilling campaign encountered higher grades of mineralization than either of our two prior drilling campaigns and we are extremely excited about our future exploration efforts." Mr. Burney further stated, "Prior to our current drilling program, we did not have sufficient subsurface information to establish a mineral resource estimate on a substantial portion of the 'Main Zone' and surrounding areas. However, due to our recent drilling efforts, for the first time in the history of this company, we will be in a position to compile a resource estimate of mineralization on the 'Main Zone' and surrounding areas. Based on information and assumptions provided to us by third party mining engineers on approximately 120 acres (or 0.4% of our property), we believe the resulting resource estimate will finally begin to place a true value on this property."

The Company has initiated discussions with a "Qualified Person" to prepare a Technical Report compliant with NI 43-101 to incorporate the results of the 2015 drilling and prior results, and expects a final report to be completed within 60-90 days.

In addition, the Company reports that ACT Holdings and its contractors have begun digitizing all of the Company's geological information, including all drilling results and surface samples, so as to compile a comprehensive 3-D geological mapping system. USPR believes this technology and data will enhance the ongoing geological efforts as well as assist them in increasing their resource estimates as they continue to explore their property.

Finally, the Company expects to receive assay results for the remaining holes in the coming days. These results have been delayed due to an annual audit conducted on ACT Labs at their facility in Mexico.

(1) To view a complete table of available composited results for Holes 1 through 17, please click on the following link to the Company's website: http://www.usprgold.com/exploration/assays-2015-drill-campaign-results.

US Precious Metals, Inc. is an exploration stage company engaged in the acquisition, exploration and development of mineral properties. The Company focuses on gold, silver and copper primarily located in the State of Michoacán, Mexico, owning exploration and exploitation concessions to approximately 37,000 contiguous acres of mineral rights, www.usprgold.com.

Contour Map of Zones of Interest 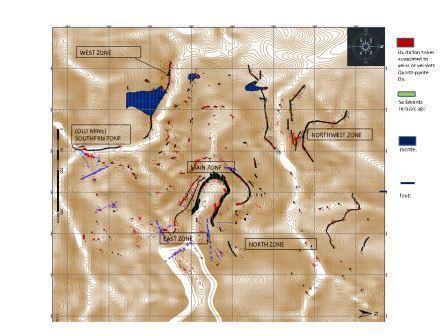