Tarachi Gold Corp. Enters Into an Agreement to Acquire 100% of Juliana and Las Moritas Concessions in Sonora, Mexico 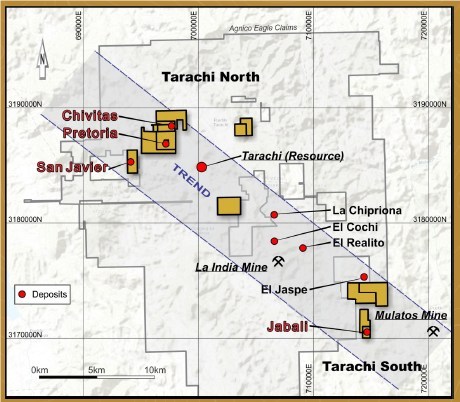 VANCOUVER, BC, Sept. 3, 2020 /CNW/ – Tarachi Gold Corp. (CSE: TRG) (“Tarachi” or the “Company“) is pleased to announce that it has entered into an arm’s length option agreement with Exploradora Cobre De Bacanoras S. DE R.L. DE C.V. whereby the Company has the right to acquire a 100% interest in the group of mining concessions known as the Juliana, Juliana No.1, Juliana No.2 and Las Moritas Mining Concessions (“the Project”). The 4 concessions cover a total surface area of 1,148.42 hectares (“ha“) (Table # 1) and are located in the Sierra Madre Gold Belt of Eastern Sonora, Mexico.

“The recently announced assay results on the La Dura, historic mine by Tarachi on August 20 confirm the importance of these new concessions. As well, the announcement on August 27 of the diamond drill mobilizing to La Dura and the Project’s geological similarities indicated the importance of these new concessions to Tarachi“, commented CEO Lorne Warner.

Tarachi’s projects now consist of the San Javier, Pretoria, Chivitas, Jabali, Juliana, Texana and Tarachi concessions for at total of 3,708 ha in the prolific Mulatos gold belt. The Project is approximately 220 kilometers by air east of the City of Hermosillo, and 300 km south of the border between the United States of America and Mexico. The Jabali claim covers the La Dura historic mine and several other small-scale mines. The gold mineralization and geology at Jabali is believed to be similar in character to the gold mineralization at the Mulatos mine. Alamos Gold Inc., in a 2003 annual report, identifies the Jabali project as being part of the “Los Bajios” mineralized trend. The Tarachi project is an early stage exploration project and the mineralization hosted on adjacent and/or nearby properties is not necessarily indicative of mineralization hosted on the Company’s property.

The Mulatos gold trend is part of the Sierra Madre gold and silver belt that also hosts the operating Mulatos gold mine immediately southeast of the La India property and the Pinos Altos mine and the Creston Mascota deposit 70 km to the southeast. Mineralization occurs within silicified rhyodacite and is associated with vuggy silica alteration, and breccia with iron oxide (hematite and specularite). Native gold occurs along late-stage fracture coatings in the breccias and is locally associated with barite. Past exploration has returned values from trace to 30g/t Au in grab samples. Native gold has also been identified in outcrop on the southern extension of the La Dura mine trend.

The Company has entered into an agreement whereby Tarachi has the sole and exclusive irrevocable right and option to acquire an undivided 100% right, title and interest in and to the Juliana, Juliana No.1, Juliana No.2 and La Moritas concessions free and clear of all encumbrances, such option to be exercisable by the Company by making cash payments of an aggregate of $2,000,000 US to the Optionor, to be paid as follows:

In addition, issue a total of 4,000,000 common shares (subject to such resale restrictions and legends as may be imposed by applicable securities laws and the CSE), as follows (collectively, the “Share Issuances“):

The transfer of the Juliana, Juliana No.1, Juliana No.2 and La Moritas concessions is subject to a 3% NSR with respect to the production from the Concessions. The Company will have the right, at any time, to repurchase 1/3 of the 3% of the NSR (being a 1% NSR), for $1,000,000.

The Company also announces that it has granted stock options to consultants of Tarachi, under the Company’s stock option plan. An aggregate amount of 80,000 stock options have been granted with an exercise price of 0.70 cents and will vest immediately. They are exercisable for a period of four years from the date of the grant and are subject to the policies of the CSE Exchange.

Lorne Warner, P. Geo, President, CEO and Director of the Company is a qualified person as defined by National Instrument 43-101 and has reviewed and approved the scientific and technical disclosure in this news release.

This news release includes certain “Forward–Looking Statements” within the meaning of the United States Private Securities Litigation Reform Act of 1995 and “forward–looking information” under applicable Canadian securities laws. When used in this news release, the words “anticipate”, “believe”, “estimate”, “expect”, “target”, “plan”, “forecast”, “may”, “would”, “could”, “schedule” and similar words or expressions, identify forward–looking statements or information. These forward–looking statements or information relate to, among other things: the exploration and development of the Project; future mineral exploration, development and production including the identification of a work program.

Forward–looking statements and forward–looking information relating to any future mineral production, liquidity, enhanced value and capital markets profile of Tarachi, future growth potential for Tarachi and its business, and future exploration plans are based on management’s reasonable assumptions, estimates, expectations, analyses and opinions, which are based on management’s experience and perception of trends, current conditions and expected developments, and other factors that management believes are relevant and reasonable in the circumstances, but which may prove to be incorrect. Assumptions have been made regarding, among other things, the price of silver, gold and other metals; costs of exploration and development; the estimated costs of development of exploration projects; Tarachi’s ability to operate in a safe and effective manner and its ability to obtain financing on reasonable terms.

These statements reflect Tarachi’s respective current views with respect to future events and are necessarily based upon a number of other assumptions and estimates that, while considered reasonable by management, are inherently subject to significant business, economic, competitive, political and social uncertainties and contingencies. Many factors, both known and unknown, could cause actual results, performance or achievements to be materially different from the results, performance or achievements that are or may be expressed or implied by such forward–looking statements or forward-looking information and Tarachi has made assumptions and estimates based on or related to many of these factors. Such factors include, without limitation: satisfaction or waiver of all applicable conditions to closing fluctuations in general macro–economic conditions; fluctuations in securities markets and the market price of Tarachi’s common shares; and the factors identified under the caption “Risk Factors” in Tarachi’s management discussion and analysis. Readers are cautioned against attributing undue certainty to forward–looking statements or forward-looking information. Although Tarachi has attempted to identify important factors that could cause actual results to differ materially, there may be other factors that cause results not to be anticipated, estimated or intended. Tarachi does not intend, and does not assume any obligation, to update these forward–looking statements or forward-looking information to reflect changes in assumptions or changes in circumstances or any other events affecting such statements or information, other than as required by applicable law.