Seeking Alpha – Torex Gold – Is There A Reason To Be Bullish?

In this article, I’ll have a look at Torex Gold Resources (TORXF.PK), a near-term gold mine developer in the Guerrero Gold Belt in Mexico, approximately 180 km south of Mexico City. The company is planning to develop its 5Moz+ gold mine at the El Limon zone of its 29,000 hectare Morelos project. This project is expected to cost $675M and was originally planned to start production in Q1 2015. In this article, I’ll have a closer look at the El Limon Bankable Feasibility Study, run some numbers on the expected annual cash flow and talk about the risks, as Torex Gold needs to relocate a village. This will result in my investment thesis at the end of this article. 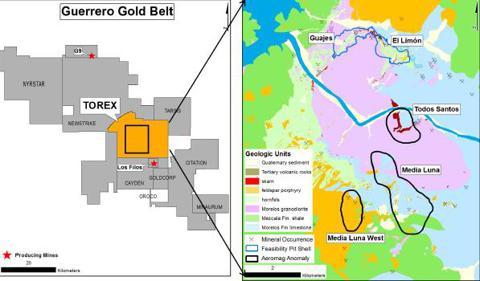 Torex Gold seems to be fully valued if you only consider the El Limon mine, as the company is currently trading at 92.5% of the project’s NPV. The real additional potential will be in defining a viable resource estimate on the Media Luna zone which is just 3 miles south of the El Limon zone. As the Media Luna target seems to be mineralized at depth, I’m afraid it will be an underground operation which would require a substantial capex.

With $325M in cash and an agreement with a consortium of five international banks for a project financing facility of up to $250M, Torex Gold is almost fully financed for its $675M El Limon project, and expects to start construction any day now as the company is awaiting one final acceptance from SEMARNAT regarding its environmental permits.

Torex’s first goal is to bring the El Limon project into production which is located approximately 30 kilometers from Goldcorp’s Los Filos mine.

Besides the El Limon zone of the Morelos project, the company has intersected extremely encouraging copper-gold-silver mineralization at the Media Luna Zone, approximately 5km south of the El Limon Zone. As Torex intersected high grade mineralization such as 49 meters of almost 4g/t gold-equivalent and 16.7 meters of 7.6g/t AuEq, the upcoming inferred resource estimate which will contain data of 80,000 meters of drilling could be very interesting. Unfortunately, most of the mineralization is at depth, so I’m doubtful the Media Luna zone can be mined by using an open pit method.

Torex Gold recently completed a Bankable Feasibility Study on the El Limon project, outlining an operation with an average annual output of 375,000 ounces of gold once the project reaches full production in 2017. As the average grade is expected to be 2.61g/t, the operating cost is quite low at just $421/oz over the life of mine. Keep in mind, this cash cost does not include exploration and G&A expenditures and no sustaining capex (which is expected to be approximately $86M over the life of mine). 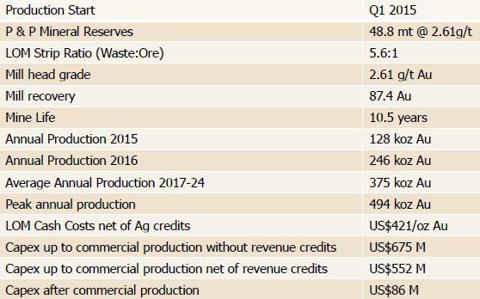 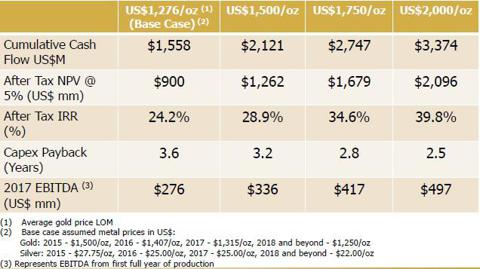 As you can see, the project won’t reach an average production rate of 300,000+ ounces of gold per annum before 2017. This is obviously the reason why the IRR is relatively low despite the moderate capital expenditures.

Let’s now have a look at the cash flow based on different gold prices. In this simulation, I’ll use the average annual output of 375,000 ounces of gold per annum at a cash cost of $500/oz (a 20% increase versus the expected $421/oz cash cost in the Bankable Feasibility Study).

As you can see, at the average annual output of 375,000 ounces of gold, the El Limon project would generate approximately $300M per annum in operational cash flow. Unfortunately, the output of the mine is quite erratic as you could see in a previous image, so it’s very difficult to make a detailed cash flow guesstimate per annum, as the cash costs will also fluctuate based on the output. The next table provides an estimate of the annual cash flows based on the output as calculated in the feasibility study and a $500/oz cash cost. The fixed gold price in this scenario is $1300/oz.


As you can see, the peak annual cash flow occurs in the final years of the current mine plan, and this is the main reason why the IRR and NPV remain relatively modest. If the peak annual cash flow would occur in the first years of operation, the IRR would increase to approximately 40% and the NPV5% would exceed the one billion dollar mark, using the company’s base case $1276/oz scenario.

A project of this size obviously carries some risk with it. In the El Limon case, Torex Gold had to relocate an entire village. Whilst this usually isn’t an easy task to complete, Torex seems to have managed this well as the villagers have accepted the new location and the housing prototypes. This means the relocation continues to be on schedule to be completed by the end of 2014.

The permitting risk seems to be very low as the company received the final acceptance of the Environmental Impact Statement and the Change of Land Use. SEMARNAT requested Torex to submit environmental protection programs. Upon the acceptance of this submission, construction works at the El Limon zone can finally start as the company also already completed a collective bargaining agreement for the construction stage.

The final potential risk is the financing risk. This risk seems to be fairly low as well for Torex Gold, as the company has a working capital of $324M and no long-term debt. Torex Gold also mandated a consortium of major banks (consisting of ING, Société Générale, BNP Paribas, BMO and the Commonwealth Bank of Australia) to provide a $250M project finance facility without any mandatory gold hedging. The fact the company won’t be forced to hedge gold at $1300/oz can be a blessing if the gold price goes up again.

The current working capital and the expected debt facility total approximately $575M, which is more than the required $552M capex up to commercial production net of revenue credits during the commissioning phase. Unfortunately, I don’t think this will be sufficient (as the gold price is currently lower than the price anticipated by Torex Gold in the first two years of operation) and I think Torex Gold will have to raise more money during the construction or commissioning phase. A possible solution could be to open a $30-50M credit facility to provide working capital during the commissioning process, which should be sufficient to cover all costs.

Torex Gold could be an interesting investment for people who believe in a slightly higher gold price. As you can see in the next table, there isn’t much value for fundamental investors, as the upside potential to the NPV/share based on a $1276/oz gold price is quite limited. For the following calculation, I used 625M shares outstanding compared to the current amount of 606.5M outstanding shares.


So as you can see, the upside potential at this moment using the $1276/oz base case scenario is just 7.5%. The real additional value and potential of the company and project will not be generated through the El Limon zone as the company is already trading at 92.5% of the El Limon NPV. The potential additional value creator will be in the further discovery of more viable deposits on the 29,000 hectares of land. Torex Gold expects to release a maiden NI43-compliant resource estimate on the Media Luna project in Q4 of this year, and I’m keen to see those preliminary tonnage and grade numbers.