The management of water resources at Goldcorp’s (GG) Penasquito mine in Mexico is far from the only challenge facing the company at the mine, as a court in the Mexican state of Zacatecas has voided the lease on some of the land, while “ordering the territory be returned to the farmers.”

Of the 23,000 acres included in the gold mine, approximately 1,483 acres have been ordered to be returned to the farmers.

As for the negotiations, the lump sum paid out of $242,000 for a 30-year lease is to be re-negotiated, with the farmers seeking about $5 million annually, citing deals nearby communal farms have secured from miners. Over time that’s a big difference, as the costs over the period of the lease would soar to about $150 million, depending on what the final evaluation of the land is determined to be by an “expert.”

The farmers claim important information was kept from them concerning the value of the land when agreeing to the deal, including its use as an open pit mine, and environmental risks that come with it. It was also claimed the farmers had no legal representation when making the decision. How that is Goldcorp’s blame is unclear, yet it was evidently part of the determination made by the judge.

Gold production estimates in 2013 is 400,000 ounces, following the $1.6 billion in revenue generated last year from Penasquito. That makes the mine the top producer for Goldcorp. The company can’t have significant delays at the mine without it affecting the bottom line of the company.

Last year, there was a problem because of a drought that led to the shortage of water. The company’s milling and processing ability per day was cut from the expected 130,000 tons to 105,000 tons. In the first quarter, Goldcorp was only able to produce a little over 60,000 ounces of gold from the mine, far less than the 112,000 ounces it produced in the prior quarter.

So even though the acreage in question is only a relatively small part of Goldcorp’s Penasquito holdings, combined with the water issues, it is a real concern in the short term. In the long term, the issue is likely to be resolved in a manner which shouldn’t make a big difference to Goldcorp in the larger picture, although the additional $5 million in annual payout, if that is the final figure, will drag more on the company than the original deal – both in the short and long term.

In the current gold climate, this will probably weigh on the company more than in a more positive gold environment.

Goldcorp COO George Burns claims the company has enough water on hand to meet guidance for Penasquito through 2014. 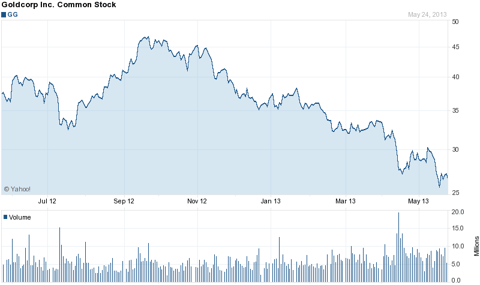 Importance of Penasquito to Goldcorp

The reason why the land issue is so important to Goldcorp, even though on the face it looks trivial, is the company has declared the mine to be its “main driver” of gold production over the next five years.

That means any negative news or events involving the mine will cause the share price of Goldcorp to move, one way or the other.

So when its biggest revenue driver has negative news about it, it will result in the share price being pressured down. While it’s not the only reason for the share price falling, we’ve seen that happen with Goldcorp as the story has unfolded and become public knowledge.

The issue has to be resolved in order to understand the impact it will have on Goldcorp. In other words, uncertainties at any level are not good in an already fearful gold environment, especially at a flagship project level.

Does Goldcorp Have any Recourse?

The director of corporate affairs in Mexico, Alfredo Phillips, asserts Goldcorp hasn’t exhausted its legal options yet, contradicting what Sol Angelica Ferreira Garnica, a court clerk at the District 1 Unitarian Agrarian Tribunal in Zacatecas, has said, which is there are no legal appeals left for the giant miner.

Now the question is whether or not Goldcorp should continue to fight this or come to a quick settlement with the farmers. What is being weighed by Goldcorp is whether the higher lease price will weigh more on the company than the uncertainty engendered by the story itself.

It seems the best move by Goldcorp would be to attain a compromise with the farmers which doesn’t give away too much, but also permanently ends the situation. Prolonging the ordeal will only hurt the company and cost them more in good will and production in the long run.

Since the judge has ordered the participants not to discuss the case, it won’t be clear until an announcement is made as to what the settlement will be, i.e., we’re unlikely to get any hints on the direction it will take.

Challenge of Gold Itself

Even though retail gold demand remains high, gold futures and the resultant outflows from gold ETPs continue to pressure gold downward. It’s unclear when a bottom will be found, and if that is going to happen any time soon. My thought is physical gold demand is helping support gold, helping it to not go into a total freefall, but it can’t completely stem the overall negative trend the sector is undergoing at this time.

In the first quarter, results from Goldcorp reveal the depth of the challenges the industry in general faces, and the company in particular. The firm reported earnings of 31 cents a share, 8 cents a share below the 39 cents a share analysts were looking for.

Even though Goldcorp produced 17 percent more gold in the first quarter of 2013 than in 2012, the lower earnings reflect the precipitous fall in the price of gold.

In 2012, the average price of gold in the first quarter was $1707 an ounce, while in the first quarter of 2013 it was $1622 an ounce. In the second quarter that is going to be far lower, with expectations earnings for the company will drop by a huge 42 percent. Anything better than that will be considered a positive, so that must be taken into account as well.

The major competitors of Goldcorp are Newmont Mining (NEM) and Barrick Gold (ABX). Earnings estimates for those two companies have been downwardly revised as well, with Barrick’s earnings expected to drop by 37 percent, and Newmont’s by 44 percent. When considering Goldcorp’s adjusted earnings estimate, all three should be considered to be in the same boat.

Having said that, Goldcorp looks to be positioned the best of the three miners going forward, based upon low debt and available cash to weather a continual downturn in gold prices.

In the first quarter, Goldcorp reported a cost of $1,135 an ounce, which is higher than its two key competitors. That is based upon lower ore grades which raised production costs. Barrick’s costs were reported in a range of $950 to $1,050 an ounce, and Newmont’s at about $1,086 an ounce. Goldcorp expects the higher production costs to be temporary, giving guidance in a range of $1,000 and $1,100 an ounce.

Where Goldcorp shines in contrast to its competitors is in liquidity. The miner said it had $1.46 billion of cash and cash equivalents at the end of the first quarter. It also issued $1.5 billion in senior unsecured notes during the reporting period.

Even though there are other properties to watch with Goldcorp, including Red Lake, where the company has lowered its guidance, Penasquito will be the project to watch over the next several years. Basically, how Penasquito goes will be how Goldcorp goes, as far as on the production side.

The other vital factor will be the price of gold. There will be an obvious material effect on the share price of Goldcorp if gold prices continue to fall.

In the scenario talked about in the article, the gold miners able to perform the best are those that have the leverage to lower costs if things get worse. Goldcorp is one of the few that are able to do that.

Since it’s impossible to know when a bottom will come to gold, any mining company remains a high risk. For Goldcorp, entering and exiting on news associated with Penasquito could bring some quick returns, whether the share price goes up or down.

With the farmer situation, good or bad news should move the share price, and those ready to cash in should make some quick money.