Azure Minerals Limited (ASX: AZS) (“Azure” or “the Company”) is pleased to report that positive and very encouraging results have been returned from preliminary metallurgical testwork on sulphide mineralisation from the Oposura Project, located in the northern Mexican state of Sonora.

Commenting on the testwork program, Azure’s Managing Director, Mr Tony Rovira said, “Metallurgical factors are always critical when evaluating project viability, and the earlier that this is achieved, the better. This high-level study was undertaken to ensure that the zinc, lead and silver mineralisation at Oposura could be extracted and concentrated into an easily saleable product. These very favourable results allow us to continue progressing development studies with confidence.”

The metallurgical testwork is being undertaken in parallel with an accelerated resource drill-out program for Oposura. Azure currently has three diamond rigs operating at Oposura with the aim of delivering a maiden mineral resource estimate in March-April 2018.

Several bulk samples, each of approximately 20-25kg, were collected from within the historical exploratory underground Oposura mine workings and testwork was undertaken by Blue Coast Research (Nanaimo, British Columbia, Canada).

A series of flotation tests were undertaken on a composite sample comprising sulphide mineralisation and waste rock taken from historical underground workings at Oposura. The test series studied flotation kinetics, reagent regimes and grind establishment with the aim of generating separate lead and zinc concentrates of commercial grade. The head grade of the composite sample was 7.2% Zn, 5.9% Pb, 0.2% Cu and 43.9g/t Ag which is considered similar to the grade of the overall mineralised horizon at Oposura.

The final test in this program comprised a full dual circuit lead-silver and zinc flotation test. The test involved a lead rougher stage and 3 stages of lead cleaning followed by a zinc rougher stage and 3 stages of zinc cleaning. The test replicated a typical dual circuit flotation plant utilised to treat lead,zinc and silver ores in order to produce separate lead-silver and zinc sulphide concentrates. 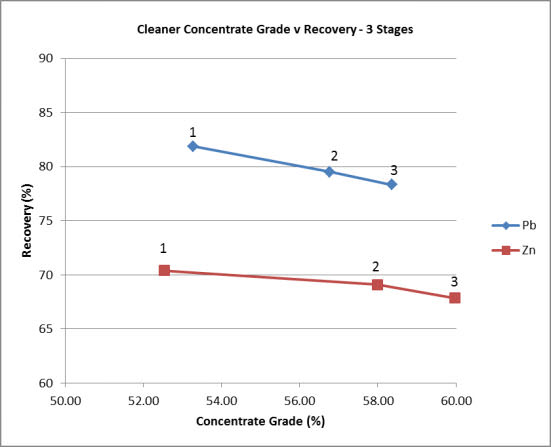 The tests also revealed that flotation kinetics are rapid with, for example, over 80% lead recovery achieved between 2 and 3 minutes of flotation time. Reagent dosages were unexceptional. Grinding used for the flotation testwork was at a p80 of 100 micron for the primary grind and a p80 of 65 micron on the rougher concentrate ahead of the cleaning stages.

The separate concentrates were analysed and the levels of deleterious elements were insignificant.

Dense media separation (DMS) is a low-cost beneficiation technology that is widely used in the mining and mineral processing industry. It utilises differences in density between liberated particles of mineralisation and waste by rejecting low density waste and concentrating high density mineralisation.

On the basis of this bimodal distribution of mineralisation (more dense) and waste rock (less dense), DMS processing was considered to be a viable option for the pre-concentration of run-of-mine ore ahead of downstream processing by flotation.

DMS tests were conducted on the same composite sample that was used in the flotation testwork.

The composite sample was crushed to a top size of approximately 9.5mm (3/8 of an inch) and fines less than 1.18mm were screened off ahead of the DMS testwork. The screened product (+1.18mm) was then subjected to the DMS testwork at three different media densities; 2.85, 3.0 and 3.2 t/m3 .

The optimum density of those tested was 3.2 t/m3 and the results of the DMS test conducted at that density is shown in Table 1 below.

These results demonstrate that the Oposura composite sample was amenable to DMS pre-concentration. The feed grade to a milling and flotation circuit could be considerably enhanced compared to a run-of mine feed grade with minimal loss of contained metal. This has positive implications for metallurgical recovery, concentrate grade, and capital and operating costs.

The DMS testwork demonstrates that where multiple lenses of high grade sulphide mineralisation are separated by low grade or barren host rock, bulk mining followed by DMS upgrade ahead of flotation is a viable option.

Additionally, where present, single lenses of high grade mineralisation could be individually mined and processed directly by flotation, by-passing the DMS process.

Further testwork will be undertaken to optimise recovery and concentrate grades and to test for variability across the mineralised zone.

There appear to be areas of higher grade copper within the mineralised horizon, and flotation of a separate copper concentrate will be addressed during the next round of testwork.

In addition, physical testwork will be undertaken on core and/or underground rock samples to determine crushing, milling, thickening and filtration performance.