The August 2014 Preliminary Economic Assessment (“PEA”) for the San Miguel Project was prepared by Metal Mining Consultants Inc. ("MMC") of Denver, Colorado and incorporated a resource model developed by Mine Development Associates ("MDA") of Reno, Nevada. The PEA added an efficient, inexpensive open pit, heap leach operation to the front end of the production scenario. The heap leach operation enabled the PEA to incorporate the San Francisco Deposit into the project design to help fund underground mining and related mill construction from cash flow. The result was a substantial increase in measured, indicated and inferred resources compared to the 2013 PEA also prepared by MMC. For San Francisco, the PEA envisions mining from two main open pits; oxide and mixed oxide/sulfide material would be processed using the inexpensive heap leach technology while higher grade sulfide material would go to the project’s mill for better recoveries (see the PEA news release of August 25, 2014).

With the addition of San Francisco to the project design, in 2014 Paramount drilled 10 new core holes totaling 2,529 meters outside the deposit’s current resource with the aim of expanding it  with the potential of mining the deposit through a single, larger open pit. All 10 holes returned long mineralized intercepts. Paramount believes that the San Francisco heap leach scenario constitutes an inexpensive option to increase gold and silver production in a combined San Miguel/Palmarejo operation. Details of the last five core drill holes at San Francisco are as follows:

These intercepts are thought to approximate true widths as San Francisco is a disseminated deposit. 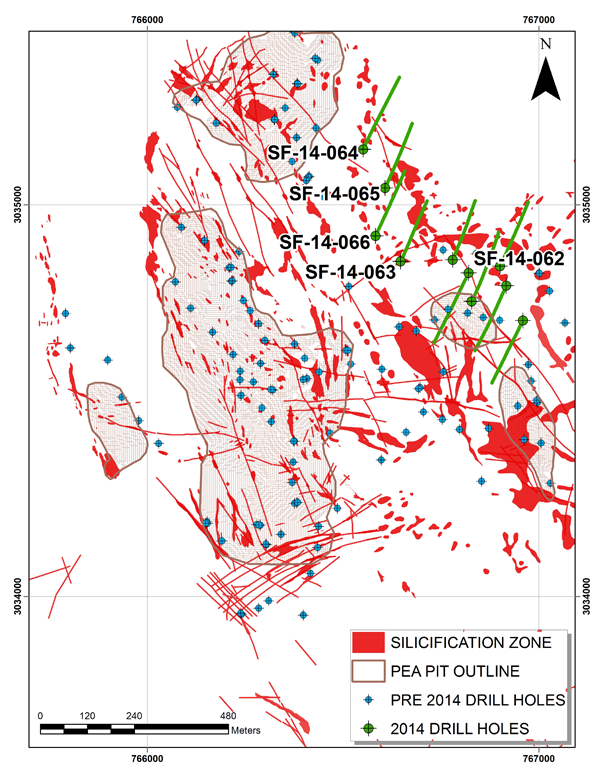 Paramount and Coeur Mining, Inc. have entered into an agreement and plan of merger, dated as of December 16, 2014 (the "Merger Agreement") pursuant to which Coeur will acquire all of the issued and outstanding shares of common stock of Paramount and the San Miguel Project (the "Merger").  As a condition to closing the Merger, the shares of Paramount’s subsidiary holding its Nevada mining assets will be spun-off to holders of Paramount’s common stock.

Pursuant to the Merger Agreement, Coeur will acquire each share of outstanding Paramount common stock from Paramount’s stockholders in exchange for 0.2016 of a share of Coeur common stock. In addition, Paramount stockholders will receive their pro rata share of the outstanding shares of an existing subsidiary or a newly incorporated subsidiary ("SpinCo") of Paramount. SpinCo will hold Paramount’s interest in the Sleeper Gold, Mill Creek and Spring Valley Projects in Nevada and will be capitalized with $10 million in cash from Coeur. Upon completion of the Merger, Paramount stockholders will hold, in aggregate, a 95.1% interest in SpinCo and Coeur will hold the remaining 4.9%. The Merger is subject to regulatory and stockholder approval.

NI 43-101 Disclosure
Exploration activities at San Miguel are being conducted by Paramount Gold de Mexico S.A de C.V personnel under the supervision of Glen van Treek, Exploration Vice President of the Company and Bill Threlkeld, a Qualified Person as defined by National Instrument 43-101, who have both reviewed and approved this press release.  An ongoing quality control/quality assurance protocol is being employed for the program including blank, duplicate and reference standards in every batch of assays. Cross-check analyses are being conducted at a second external laboratory on 10% of the samples. Samples are being assayed at ALS Chemex and Acme Laboratories, Vancouver, B.C., using fire assay atomic absorption methods for gold and aqua regia digestion ICP methods for other elements.

About Paramount
Paramount is a U.S.-based exploration and development company with multi-million ounce advanced stage precious metals projects in northern Mexico (San Miguel) and Nevada (Sleeper). Fully-funded exploration and engineering programs are now in progress at these two core projects which are expected to generate substantial additional value for our stockholders.

The San Miguel Project consists of over 100,000 hectares (over 247,000 acres) in the Palmarejo District of northwest Mexico, making Paramount the largest claim holder in this rapidly growing precious metals mining camp. The San Miguel Project is ideally situated near established, low cost production where the infrastructure already exists for early, cost-effective exploitation. The San Miguel Project does not contain any known reserves and any planned drilling program is exploratory in nature.

The Sleeper Gold Project is located off a main highway about 25 miles from the town of Winnemucca. In 2010, Paramount acquired a 100% interest in the project including the original Sleeper high-grade open pit mine operated by Amax Gold from 1986 to 1996 as well as staked and purchased lands now totaling 2,570 claims and covering about 47,500 acres which stretch south down trend to Newmont’s Sandman project. This acquisition is consistent with the Company's strategy of district-scale exploration near infrastructure in established mining camps. The Sleeper Gold Project does not contain any known reserves and any planned drilling program is exploratory in nature.