The most recent program of infill and exploration drilling at Don Ese and the nearby Dana discovery totalled 4,364 meters in eight holes. The results are expected to increase the total mineralized material at each deposit (see cross-section below). Drilling at Dana has discovered a further mineralized occurrence which appears to be an offshoot of Don Ese, and these zones could be exploited in tandem (see January 6, 2015 news release).

Coeur has stated that it plans to develop Don Ese by a 1,000 meter decline adjacent to the existing Guadalupe surface infrastructure at an initial cost of approximately $15 million, and anticipates initial production from Don Ese by the end of 2015, ramping up to 2,500 tons per day by the end of 2017 (see Coeur press release dated December 17, 2014 for more development details). Coeur recently announced an initial resource at its Independencia deposit, which represents the northwest extension of Don Ese (see Coeur press release datedDecember 19, 2014).

Paramount CEO Christopher Crupi noted that drilling focused on the Dana discovery and other nearby targets will start up again shortly. "Our aim is to add further value to the proposed combination of Paramount and Coeur. Coeur’s infrastructure at its Palmarejo project is ideally suited for low cost, efficient development of San Miguel’s deposits. Further drilling should help to accelerate the realization of these synergies and potentially extend the mine life of Coeur’s Palmarejo complex by adding to the inventory of mineralized material."

The results from the final three holes drilled in 2014 at Don Ese are:

A precise estimate of true widths requires additional modeling, however it is expected that true widths are not less than 80% of the reported intercepts. 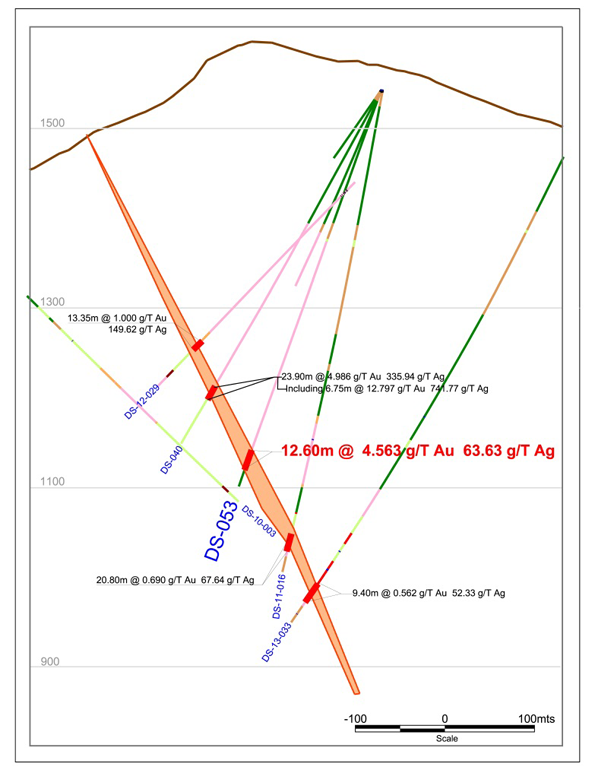 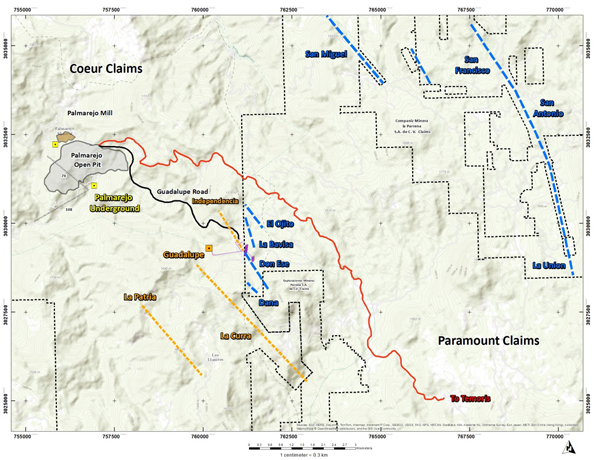 Paramount and Coeur Mining, Inc. have entered into an agreement and plan of merger, dated as of December 16, 2014 (the "Merger Agreement") pursuant to which Coeur will acquire all of the issued and outstanding shares of common stock of Paramount and the San Miguel Project (the "Merger").  As a condition to closing the Merger, the shares of Paramount’s subsidiary holding its Nevada mining assets will be spun-off to holders of Paramount’s common stock.
Pursuant to the Merger Agreement, Coeur will acquire each share of outstanding Paramount common stock from Paramount’s stockholders in exchange for 0.2016 of a share of Coeur common stock. In addition, Paramount stockholders will receive their pro rata share of the outstanding shares of an existing subsidiary or a newly incorporated subsidiary ("SpinCo") of Paramount. SpinCo will hold Paramount’s interest in the Sleeper Gold, Mill Creek and Spring Valley Projects in Nevada and will be capitalized with $10 million in cash from Coeur. Upon completion of the Merger, Paramount stockholders will hold, in aggregate, a 95.1% interest in SpinCo and Coeur will hold the remaining 4.9%. The Merger is subject to regulatory and stockholder approval.
NI 43-101 Disclosure
Exploration activities at San Miguel are being conducted by Paramount Gold de Mexico S.A de C.V personnel under the supervision of Glen van Treek, Exploration Vice President of the Company and Bill Threlkeld, a Qualified Person as defined by National Instrument 43-101, who have both reviewed and approved this press release.  An ongoing quality control/quality assurance protocol is being employed for the program including blank, duplicate and reference standards in every batch of assays. Cross-check analyses are being conducted at a second external laboratory on 10% of the samples. Samples are being assayed at ALS Chemex and Acme Laboratories, Vancouver, B.C., using fire assay atomic absorption methods for gold and aqua regia digestion ICP methods for other elements.

About Paramount
Paramount is a U.S.-based exploration and development company with multi-million ounce advanced stage precious metals projects in northern Mexico (San Miguel) and Nevada (Sleeper). Fully-funded exploration and engineering programs are now in progress at these two core projects which are expected to generate substantial additional value for our stockholders.

The San Miguel Project consists of over 100,000 hectares (over 247,000 acres) in the Palmarejo District of northwest Mexico, making Paramount the largest claim holder in this rapidly growing precious metals mining camp. The San Miguel Project is ideally situated near established, low cost production where the infrastructure already exists for early, cost-effective exploitation. The San Miguel Project does not contain any known reserves and any planned drilling program is exploratory in nature.

The Sleeper Gold Project is located off a main highway about 25 miles from the town of Winnemucca. In 2010, Paramount acquired a 100% interest in the project including the original Sleeper high-grade open pit mine operated by Amax Gold from 1986 to 1996 as well as staked and purchased lands now totaling 2,570 claims and covering about 47,500 acres which stretch south down trend to Newmont’s Sandman project. This acquisition is consistent with the Company's strategy of district-scale exploration near infrastructure in established mining camps. The Sleeper Gold Project does not contain any known reserves and any planned drilling program is exploratory in nature.