The new San Isidro structural system runs parallel to, and west of, the 7 km long Guazapares Mega-structure which hosts Paramounts rich La Union and San Antonio deposits. San Isidro has been recognized along strike for at least four kilometers and passes near the proposed location of the process plant as set out in the San Miguel Preliminary Economic Assessment (PEA) released on February 28, 2013.

Several rock samples from San Isidro returned spectacular grades–over 100 grams per tonne (g/T) of gold and up to 2,291 g/T of silver (about 70 ounces per tonne). Surface sampling has consistently found high grade material, predominantly silver. At San Miguel, higher silver values are generally found at the top of the system, near surface, while gold grades tend to improve with depth. Rock sampling at San Isidro supports this observation.

A total of 57 chip samples were collected from the central part of the structural system which is characterized by silica-rich replacement, massive quartz veins and altered rocks. Over 35 % of these samples returned silver values greater than 15 g/T and averaged a highly prospective 301 g/T silver (almost 10 ounces per tonne).

Two shallow core holes were then drilled to confirm the orientation of the structure and test for mineralization. Both holes successfully intersected several veins containing excellent precious metal values including gold grades up to 2.8 g/T and silver up to 214 g/T.  The best intercept (in SI-13- 001) averaged 0.61 g/T of gold and 31.6 g/T of silver over 11 meters (from 174 to 185 m). See the table below. Further drilling is required to determine the optimum elevation for better gold grades.

Paramounts geological team is continuing detailed surface mapping along the structure to define areas that are potentially wider and higher grade. About 3 km. of the structural system is within Paramounts concessions.  The remainder of the San Isidro structural system strikes onto ground owned by Fresnillo PLC, the worlds largest primary silver producer. Fresnillo is actively exploring its relatively smaller claims package which is surrounded by Paramounts claims and lies adjacent to Coeurs Palmarejo Mine (see map below).

Results from the two preliminary San Isidro drill holes are as follows:

These holes were drilled to intersect the structures at what were thought to be right angles and it is therefore expected that the reported intercepts closely approximate true widths.

Christopher Crupi, Paramounts CEO, commented: We are very excited to discover this new structure which once again demonstrates that San Miguel remains an outstanding exploration project as well as a robust mining opportunity at even lower than current metal prices. We believe this structure has the potential to deliver multiple deposits with grades that equal anything found in the Palmarejo District. 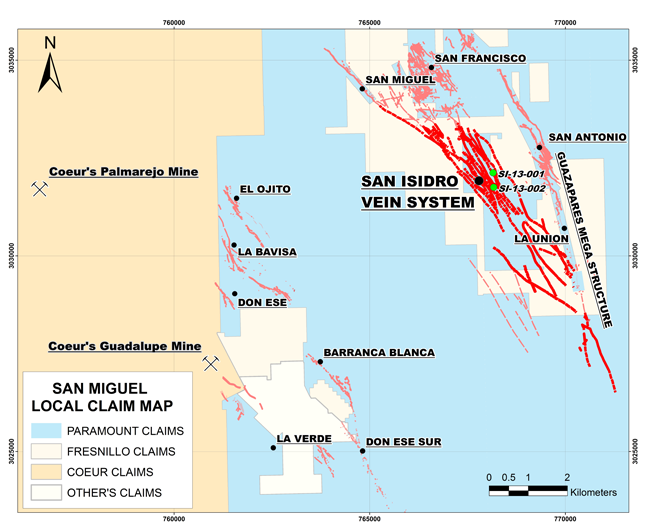 Exploration activities at San Miguel are being conducted by Paramount Gold de Mexico S.A de C.V personnel under the supervision of Glen van Treek, Exploration Vice President of the Company and Bill Threlkeld, a Qualified Person as defined by National Instrument 43-101, who have both reviewed and approved this press release.  An ongoing quality control/quality assurance protocol is being employed for the program including blank, duplicate and reference standards in every batch of assays. Cross-check analyses are being conducted at a second external laboratory on 10% of the samples. Samples are being assayed at ALS Chemex and Acme Laboratories, Vancouver, B.C., using fire assay atomic absorption methods for gold and aqua regia digestion ICP methods for other elements.

San Miguel Project PEA
The PEA was prepared by Metal Mining Consultants (“MMC”) of Denver, Colorado incorporating a resource model developed by MDA. The PEA confirms that the San Miguel Project represents an unusually robust economic opportunity to develop a low cost mine in the prolific Sierra Madre belt in Mexico. In their analysis, MMC proposed a 4,000 tonnes per day mill fed by open pits and underground mines, resulting in a projected 14 year operation with a total metal production of 803,000 ounces of gold and 43.2 million ounces of silver (1,637,000 ounces of gold equivalent at the base case gold-to-silver price ratio of 51.7 to 1).

Start-up capital costs including working capital are estimated at $243 million. Sustaining capital costs over the projects life are projected to be an additional $227 million. With $70.3 million in contingencies, total life-of-mine capital costs are estimated at $540 million. Projected life-of-mine average cash operating costs are $512 per ounce of equivalent gold recovered. The total cost of production (including cash operating costs and total capital and contingency costs over the life of the mine) is estimated at US$842 per ounce of gold equivalent, which compares favorably with current producers in the region. At a gold price of $1500 per ounce and a silver price of $29 per ounce (the 3 year trailing average of gold and silver prices at the end of January 2013), the San Miguel PEA estimated a $1.1 billion pre-tax net cash flow, a $707 million pre-tax net present value at a 5% discount rate and a highly accretive internal rate of return of 33.2%.  Note that the PEA incorporates inferred mineral resources which are considered to be too geologically speculative to have the economic considerations applied to them that would enable them to be categorized as mineral reserves and, as such, do not have demonstrated economic viability. There can be no certainty that the estimates contained in the PEA will be realized.

About Paramount
Paramount is a U.S.-based exploration and development company with multi-million ounce advanced stage precious metals projects in northern Mexico (San Miguel) and Nevada (Sleeper). Fully-funded exploration and engineering programs are now in progress at these two core projects which are expected to generate substantial additional value for our shareholders.

The San Miguel Project consists of over 142,000 hectares (over 353,000 acres) in the Palmarejo District of northwest Mexico, making Paramount the largest claim holder in this rapidly growing precious metals mining camp. The San Miguel Project is ideally situated near established, low cost production where the infrastructure already exists for early, cost-effective exploitation. A PEA for San Miguel was completed and announced on February 28, 2013.

The Sleeper Gold Project is located off a main highway about 25 miles from the town of Winnemucca. In 2010, Paramount acquired a 100% interest in the project including the original Sleeper high-grade open pit mine operated by Amax Gold from 1986 to 1996 as well as staked and purchased lands now totaling 2,570 claims and covering about 47,500 acres which stretch south down trend to Newmonts Sandman project. This acquisition is consistent with the Company’s strategy of district-scale exploration near infrastructure in established mining camps. A PEA was completed for Sleeper and announced on July 30, 2012.

Cautionary Note to U.S. Investors Concerning Estimates of Indicated and Inferred Resources
This news release uses the terms “measured and indicated resources” and “inferred resources”. We advise U.S. investors that while these terms are defined in, and permitted by, Canadian regulations, these terms are not defined terms under SEC Industry Guide 7 and not normally permitted to be used in reports and registration statements filed with the SEC. “Inferred resources” have a great amount of uncertainty as to their existence, and great uncertainty as to their economic and legal feasibility. It cannot be assumed that all or any part of an inferred mineral resource will ever be upgraded to a higher category. Under Canadian rules, estimates of inferred mineral resources may not form the basis of a feasibility study or prefeasibility studies, except in rare cases. The SEC normally only permits issuers to report mineralization that does not constitute SEC Industry Guide 7 compliant “reserves”, as in-place tonnage and grade without reference to unit measures. U.S. investors are cautioned not to assume that any part or all of mineral deposits in this category will ever be converted into reserves. U.S. investors are cautioned not to assume that any part or all of an inferred resource exists or is economically or legally minable

Safe Harbor for Forward-Looking Statements:
This release and related documents may include “forward-looking statements” including, but not limited to, statements related to the interpretation of drilling results and potential mineralization, future exploration work at the San Miguel Project and the expected results of this work, estimates of resources including expected volumes and grades and the economic projections included in the projects PEA. Forward-looking statements are statements that are not historical fact and are subject to a variety of risks and uncertainties which could cause actual events to differ materially from those reflected in the forward-looking statements including fluctuations in the price of gold, inability to complete drill programs on time and on budget, and future financing ability. Paramounts future expectations, beliefs, goals, plans or prospects constitute forward-looking statements within the meaning of the United States Private Securities Litigation Reform Act of 1995 and other applicable securities laws. Words such as “believes,” “plans,” “anticipates,” “expects,” “estimates” and similar expressions should also be considered to be forward-looking statements. There are a number of important factors that could cause actual results or events to differ materially from those indicated by such forward-looking statements, including, but not limited to: uncertainties involving interpretation of drilling results, environmental matters, lack of ability to obtain required permitting, equipment breakdown or disruptions, and the other factors described in Paramounts Annual Report on Form 10-K for the year ended June 30, 2012 and its most recent quarterly reports filed with the SEC.