Drill hole DS-049 intersected the Don Ese vein as expected with grades exceeding what had been previously predicted by the model as inferred resources. The vein intercept totaled 15.6 meters grading 2.59 grams per tonne of gold (g/T Au) and 366.0 grams per tonne of silver (g/T Ag), a gold equivalent grade of 8.69 g/T Au using a 1 to 60 Au:Ag ratio. Included in this intercept are 5.95 meters grading 4.24 g/T Au and 561 g/T Ag.  Drill hole DS-049 will most likely convert inferred resources to measured and indicated at higher grades (see cross section below).

Paramount is currently drilling the Don Ese and Dana structures with three core rigs as part of its program of moving the San Miguel Project towards a Pre-Feasibility Study. Don Ese and the closely related, parallel Dana are located about 800 meters from Coeur Mining Inc.’s Guadalupe deposit on its flagship Palmarejo Project. Don Ese, Dana and Guadalupe are similar occurrences which appear to be parts of the same mineralizing system.

Paramount CEO Christopher Crupi noted that the Company plans to continue its program through the winter. "This is an ideal time to explore given the significant drop in costs due to the current environment and thus ensuring that when the precious metals market turns, we have added substantial value to our projects."

Details from the holes drilled in the current program at Don Ese are below:

A definitive true width estimate requires additional drilling but is expected to be not less than 85% of the reported intercepts. 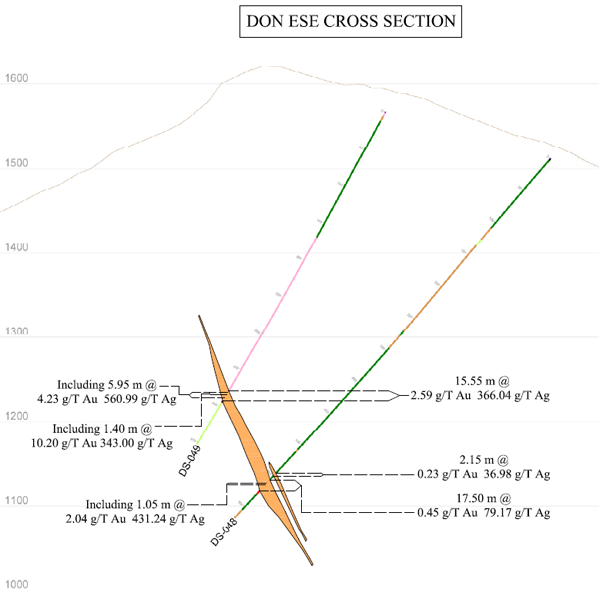 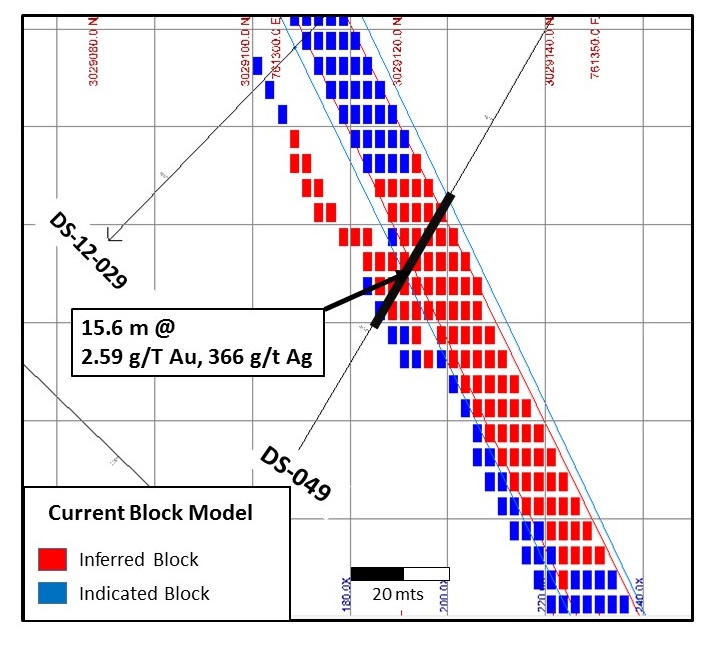 NI 43-101 Disclosure
Exploration activities at San Miguel are being conducted by Paramount Gold de Mexico S.A de C.V personnel under the supervision of Glen van Treek, Exploration Vice President of the Company and Bill Threlkeld, a Qualified Person as defined by National Instrument 43-101, who have both reviewed and approved this press release.  An ongoing quality control/quality assurance protocol is being employed for the program including blank, duplicate and reference standards in every batch of assays. Cross-check analyses are being conducted at a second external laboratory on 10% of the samples. Samples are being assayed at ALS Chemex and Acme Laboratories, Vancouver, B.C., using fire assay atomic absorption methods for gold and aqua regia digestion ICP methods for other elements.

About Paramount
Paramount is a U.S.-based exploration and development company with multi-million ounce advanced stage precious metals projects in northern Mexico (San Miguel) and Nevada (Sleeper). Fully-funded exploration and engineering programs are now in progress at these two core projects which are expected to generate substantial additional value for our shareholders.

The San Miguel Project consists of over 100,000 hectares (over 247,000 acres) in the Palmarejo District of northwest Mexico, making Paramount the largest claim holder in this rapidly growing precious metals mining camp. The San Miguel Project is ideally situated near established, low cost production where the infrastructure already exists for early, cost-effective exploitation. A second Preliminary Economic Assessment (PEA) for San Miguel was completed and announced on August 25, 2014.

The Sleeper Gold Project is located off a main highway about 25 miles from the town of Winnemucca. In 2010, Paramount acquired a 100% interest in the project including the original Sleeper high-grade open pit mine operated by Amax Gold from 1986 to 1996 as well as staked and purchased lands now totaling 2,570 claims and covering about 47,500 acres which stretch south down trend to Newmont’s Sandman project. This acquisition is consistent with the Company's strategy of district-scale exploration near infrastructure in established mining camps. A PEA was completed for Sleeper and announced on July 30, 2012.

Cautionary Note to U.S. Investors Concerning Estimates of Indicated and Inferred Resources
This news release uses the terms "measured and indicated resources" and "inferred resources". We advise U.S. investors that while these terms are defined in, and permitted by, Canadian regulations, these terms are not defined terms under SEC Industry Guide 7 and not normally permitted to be used in reports and registration statements filed with the SEC. "Inferred resources" have a great amount of uncertainty as to their existence, and great uncertainty as to their economic and legal feasibility. It cannot be assumed that all or any part of an inferred mineral resource will ever be upgraded to a higher category. Under Canadian rules, estimates of inferred mineral resources may not form the basis of a feasibility study or prefeasibility studies, except in rare cases. The SEC normally only permits issuers to report mineralization that does not constitute SEC Industry Guide 7 compliant "reserves", as in-place tonnage and grade without reference to unit measures. U.S. investors are cautioned not to assume that any part or all of mineral deposits in this category will ever be converted into reserves. U.S. investors are cautioned not to assume that any part or all of an inferred resource exists or is economically or legally minable.