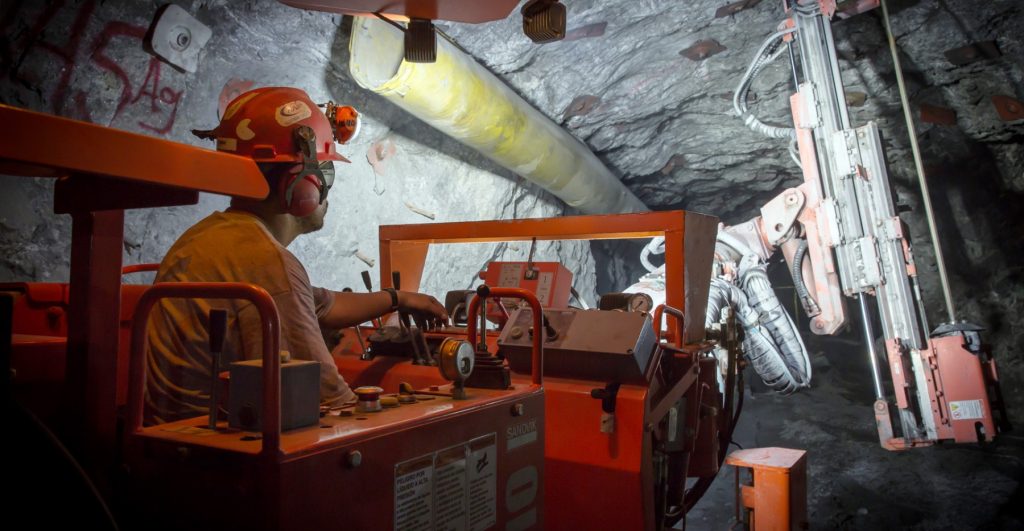 All financial figures are expressed in US$ unless otherwise indicated.

The reserve and resource information provided in this news release is only for Pan American’s operations and do not reflect the plan of arrangement (the “Arrangement”) whereby Pan American will acquire all of the issued and outstanding common shares of Tahoe Resources Inc. (“Tahoe”), announced on November 14, 2018. Pan American currently expects the Arrangement to be completed on or about February 22, 2019.

“2018 was a very successful year for near-site mine exploration with the replacement of over 21 million ounces of silver and the major skarn discovery at La Colorada, which is not yet reflected in our proven and probable reserves or resources,” said Christopher Emerson, Pan American’s Vice President Business Development and Geology. “Drill hole U-68-18 with 308 metres of polymetallic mineralization is another impressive result of this major discovery”.

Exploration drilling of the skarn mineralization at depth, approximately 500 to 800 metres below the drill stations, indicates wide intercepts with high-grade, polymetallic mineralization. In particular, drillhole U-87-18, which was drilled 200 metres south of drillhole U-39-18 (reported in Pan American’s news release dated October 23, 2018, with 223 metres of polymetallic mineralization), is located in previously untested areas of the mine concession. Visit panamericansilver.com to view cross sections, plan and images of the mineralized core.

A summary of the drill results from the recently completed 6,800 metres of drilling is provided at the end of this news release.

Morococha (Peru) – added 7.7 million ounces of new silver reserves, in addition to an increase of 76,000 tonnes of zinc and 21,000 tonnes of lead, which is associated with the increase in polymetallic mineralization at depth. The continued exploration drilling success at Morococha underlines the potential of this district, especially in the eastern portion of the mine.

Huaron (Peru) – added 4.9 million ounces of silver, primarily through the conversion of resources on the principal structures to reserves due to the 100 level deepening project.

2019 Exploration Program
In 2019, Pan American plans to invest approximately $20 million in exploration, and complete about 122,000 metres of diamond drilling; about 42,000 meters of drilling will be directed towards the skarn discovery at La Colorada in order to release an initial mineral resource estimation later in 2019.

Future Mineral Reserve and Resource Updates
Pan American intends to provide future mineral reserve and resource updates as at the period ending June 30th of each year, rather than at the period ending December 31st of each year, in order to optimally align mineral reserves updates, mine plans and budgets. This change will take effect on June 30, 2019, and the updated mineral reserve and resource estimates are expected to include the Tahoe assets that will be added to the Company’s portfolio following completion of the Arrangement.

A summary of the silver and gold mineral reserve and resource information at December 31, 2018 is provided in the following tables:

General Notes with Respect to Technical Information
Mineral reserves and resources are as defined by the Canadian Institute of Mining, Metallurgy and Petroleum.

Pan American does not expect these mineral reserve and resource estimates to be materially affected by metallurgical, environmental, permitting, legal, taxation, socio-economic, political, and marketing or other relevant issues.

Complete mineral reserve and resource information for all metals, including tonnage and grades, is available at www.panamericansilver.com.

Technical information contained in this news release with respect to Pan American has been reviewed and approved by Christopher Emerson, FAusIMM., Vice President Business Development and Geology, and Martin Wafforn, P.Eng., Senior Vice President Technical Services and Process Optimization, who are each Qualified Persons for the purposes of National Instrument 43-101.

A summary of the La Colorada drill results is provided in the following table(1)(2):

About Pan American Silver
Pan American Silver Corp. is the world’s second largest primary silver producer, providing enhanced exposure to silver through a diversified portfolio of assets, large reserves and growing production. We own and operate six mines in Mexico, Peru, Argentina and Bolivia. Pan American Silver maintains a strong balance sheet, has an established management team with proven operating expertise, and is committed to responsible development. Founded in 1994, the Company is headquartered in Vancouver, B.C. and our shares trade on NASDAQ and the Toronto Stock Exchange under the symbol “PAAS”.

These forward-looking statements and information reflect the Company’s current views with respect to future events and are necessarily based upon a number of assumptions that, while considered reasonable by the Company, are inherently subject to significant operational, business, economic and regulatory uncertainties and contingencies. These assumptions include: our mineral reserve and mineral resource estimates and the assumptions upon which they are based; ore grades and recoveries; prices for silver, gold, and base metals remaining as estimated; currency exchange rates remaining as estimated; capital, decommissioning and reclamation estimates; prices for energy inputs, labour, materials, supplies and services (including transportation); all necessary permits, licenses and regulatory approvals for our operations are received in a timely manner; and our ability to comply with environmental, health and safety laws. The foregoing list of assumptions is not exhaustive.

The Company cautions the reader that forward-looking statements and information involve known and unknown risks, uncertainties and other factors that may cause actual results and developments to differ materially from those expressed or implied by such forward-looking statements or information contained in this news release and the Company has made assumptions and estimates based on or related to many of these factors. Such factors include, without limitation: fluctuations in silver, gold and base metal prices; fluctuations in prices for energy inputs, labour, materials, supplies and services (including transportation); fluctuations in currency markets (such as the Canadian dollar, Peruvian sol, Mexican peso, Argentine peso and Bolivian boliviano versus the U.S. dollar); operational risks and hazards inherent with the business of mining (including environmental accidents and hazards, industrial accidents, equipment breakdown, unusual or unexpected geological or structural formations, cave-ins, flooding and severe weather); risks relating to the credit worthiness or financial condition of suppliers, refiners and other parties with whom the Company does business; inadequate insurance, or inability to obtain insurance, to cover these risks and hazards; employee relations; relationships with, and claims by, local communities and indigenous populations; our ability to obtain all necessary permits, licenses and regulatory approvals in a timely manner; changes in laws, regulations and government practices in the jurisdictions where we operate, including environmental, export and import laws and regulations; legal restrictions relating to mining, including in Chubut, Argentina; risks relating to expropriation; diminishing quantities or grades of mineral reserves as properties are mined; increased competition in the mining industry for equipment and qualified personnel; and those factors identified under the caption “Risks Related to Pan American’s Business” in the Company’s most recent form 40-F and Annual Information Form filed with the United States Securities and Exchange Commission and Canadian provincial securities regulatory authorities, respectively. Although the Company has attempted to identify important factors that could cause actual results to differ materially, there may be other factors that cause results not to be as anticipated, estimated, described or intended. Investors are cautioned against undue reliance on forward-looking statements or information. Forward-looking statements and information are designed to help readers understand management’s current views of our near and longer term prospects and may not be appropriate for other purposes. The Company does not intend, nor does it assume any obligation to update or revise forward-looking statements or information, whether as a result of new information, changes in assumptions, future events or otherwise, except to the extent required by applicable law.

This news release has been prepared in accordance with the requirements of Canadian securities laws, which differ from the requirements of U.S. securities laws. Unless otherwise indicated, all mineral reserve and resource estimates included in this news release have been disclosed in accordance with Canadian National Instrument 43-101 – Standards of Disclosure for Mineral Projects (”NI 43-101”) and the Canadian Institute of Mining, Metallurgy and Petroleum Definition Standards. NI 43-101 is a rule developed by the Canadian Securities Administrators that establishes standards for all public disclosure an issuer makes of scientific and technical information concerning mineral projects.

Canadian public disclosure standards, including NI 43-101, differ significantly from the requirements of the United States Securities and Exchange Commission (the “SEC”), and information concerning mineralization, deposits, mineral reserve and resource information contained or referred to herein may not be comparable to similar information disclosed by U.S. companies. In particular, and without limiting the generality of the foregoing, this news release uses the terms ”measured resources”, ”indicated resources”, and ”inferred resources”. U.S. investors are advised that, while such terms are recognized and required by Canadian securities laws, the SEC does not recognize them. The requirements of NI 43-101 for identification of ”reserves” are not the same as those of the SEC, and reserves reported by Pan American in compliance with NI 43-101 may not qualify as ”reserves” under SEC standards. Under U.S. standards, mineralization may not be classified as a ”reserve” unless the determination has been made that the mineralization could be economically and legally produced or extracted at the time the reserve determination is made. U.S. investors are cautioned not to assume that any part of a “measured resource” or “indicated resource” will ever be converted into a “reserve”. U.S. investors should also understand that “inferred resources” have a great amount of uncertainty as to their existence and great uncertainty as to their economic and legal feasibility. It cannot be assumed that all or any part of “inferred resources” exist, are economically or legally mineable or will ever be upgraded to a higher category. Under Canadian securities laws, estimated “inferred resources” may not form the basis of feasibility or pre-feasibility studies except in rare cases. Disclosure of “contained ounces” in a mineral resource is permitted disclosure under Canadian securities laws. However, the SEC normally only permits issuers to report mineralization that does not constitute “reserves” by SEC standards as in place tonnage and grade, without reference to unit measures. Accordingly, information concerning mineral deposits set forth herein may not be comparable with information made public by companies that report in accordance with U.S. standards.