Pacifico Minerals Limited (“Pacifico” or “Company”) is pleased to report it has entered into a Binding Option and Terms to Purchase agreement (“Agreement”) to acquire all the issued capital in Minera GS S.A. de C.V. (“Minera GS”), a privately held gold mining and exploration company incorporated in Mexico that holds 100% of the mineral rights within the prospective tenement T.243345 (the “Violin Project”).

The Violin Project, which has outstanding potential for a large and significant goldcopper deposit, lies in the Guerrero State of Mexico, about 250km south-west of Mexico City. The nearest major town of Chilpancingo is about 2 hours’ drive. A network of tracks makes most of the area quite accessible. Pacifico’s extensive experience operating in Latin America proved invaluable in securing the project.

The Violin Project lies within the Guerrero Gold Belt (Figure 1) which contains several major gold deposits and mines, see Table 1. Mineralization in the area is related to gold bearing iron skarn porphyries and occur within faults and as replacement deposits formed in and around the igneous intrusions. VMS-style massive sulphide deposits such as Campo Morado (Table 1) also occur in the region.

The Guerrero Gold Belt consists of Tertiary tonalite, granodiorite and monzodiorite porphyries intruded into Cretaceous limestones and sandstones. Skarn is developed as altered and replaced rock along the contact between the igneous intrusions and the carbonate-rich country rock. Within these skarn contact zones iron minerals dominate and include magnetite, hematite and pyrite as well as quartz, sericite, clays, gold and copper sulfide minerals. 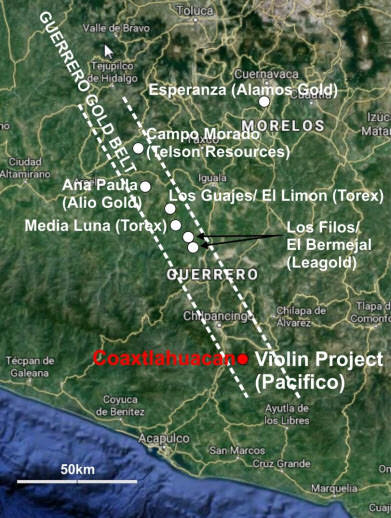 Within the Violin Project area sediments, including limestones, are intruded by a major quartz monzonite stock and quartz-felspar-biotite porphyry dykes, sills and plugs (Figure 2).

Exploration to date includes detailed soil geochemistry. Soil samples were collected from lines spaced 100 to 200 meters at 25 meters apart over most of the licence area (3,882 soil samples), the work was carried out by Exploraciones La Plata de C.V. in 2007 (samples with values over 100ppb Au and/or 300ppm Cu are listed in Appendix 1, samples not listed contained lower values that were considered immaterial). The results are considered reliable by Pacifico due to check sample lines carried out by Silver Standard Inc. in 2013, and by limited verification sampling carried out under the supervision of Pacifico in 2017. However, the Exploration Results have not been reported in accordance with the JORC Code 2012.

In addition to geological mapping, rock chip sampling (259 samples in total) has been completed (samples with values over 500ppb Au and/or 5000ppm Cu are listed in Appendix 2, samples not listed contained lower values that were considered immaterial). An IP survey and a ground magnetic survey have also been completed over the Coaxtlahuacan Prospect.

The Coaxtlahuacan Prospect is the most advanced Prospect within the Violin Project and is of immediate high interest to Pacifico for the establishment of drill targets. Observations made by Pacifico geologists during a due diligence site visit indicate that the copper mineralisation at Coaxtlahuacan occurs as chalcocite and malachite and is associated with stockworks, massive lenses and disseminations of magnetite, or sericite altered quartz felspar porphyry. The distribution and extent of associated strong gold and copper geochemistry are in accordance with the skarn model of intrusive related mineralisation at and near the contact with limestones, as found elsewhere at the major mines and deposits of the Guerrero Belt. Five check channel samples (Figure 4) were taken by Pacifico with an average 0.44g/t Au and 0.70% Cu (Appendix 3), and which confirm previous channel sampling in this area. 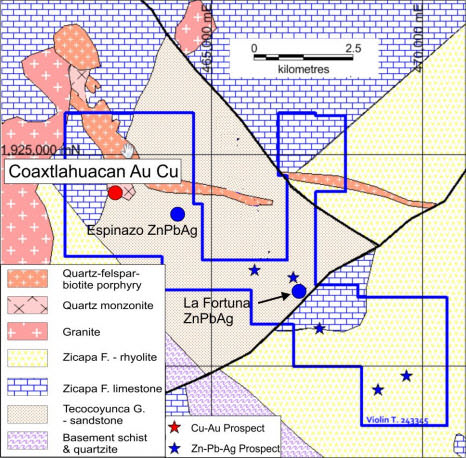 Figure 2: Violin Project tenement area, geology and prospects
The visible surface indications of extensive stockwork copper gold mineralisation occur over an area of 500 x 100m in the topographically lower part (particularly gullies) of the geochemically anomalous area. Pre-erosion near-surface weathering and leaching of the copper has resulted in the copper only being detected in gullies. The soils, over this zone, show an anomalous area of 500m x 300m that contains soil sample values of >100ppb Au, and which is open to the south (Figure 4).
In addition, there is a major gold only anomaly to the north and east lying within an area of saprolite cover and peripheral to ground magnetic highs. The significant gold in soils geochemistry, of more than 50ppb Au, occurs over an area of 1.6km x 1.3km (Figure 4). Within part of this zone occurs a major gold anomaly (>100ppb Au, with values up to 2161ppb Au) covering an area of about 1500m x 200m. The strength and extent of this gold in soil anomaly is impressive and indicates potential for a substantial tonnage of disseminated and stockwork gold (and probably copper, having been leached out near-surface) mineralisation. This anomalous zone is open to the north west and to the south.

Pacifico plans to rapidly confirm drill targets and commence drilling as soon as practical, in order to advance towards establishing resources. 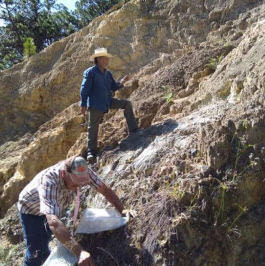 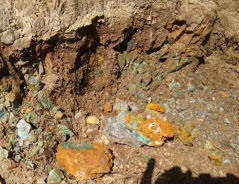 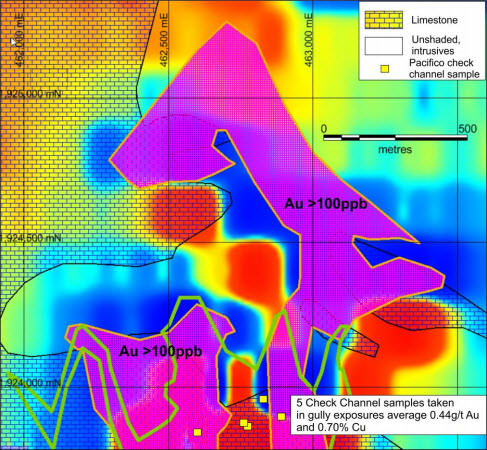 The Pacifico due diligence site visit focussed on the Coaxtlahuacan prospect, however also of great interest are the Fortuna and Espinazo zinc, lead, and silver prospects located within the tenement (Figure 2), regarded as showing sedex style mineralisation. At the Fortuna prospect, the average value of 10 dump and grab rock chip samples previously taken is 5.2% Zn, 4.5% Pb and 220g/t Ag (Figure 5 and Appendix 4). These prospects remain an unevaluated upside. 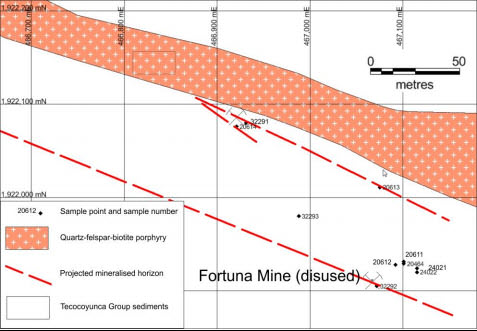 An Agreement has been concluded between the Vendors to grant an option to acquire all the issued capital in Minera GS.

In consideration of a payment of US$50,000 (to be funded through current cash reserves) and 10,000,000 fully paid ordinary shares in the issued capital of Pacifico (to be issued shortly under Listing Rule 7.1), the vendor grants Pacifico the sole and exclusive option (“Option”) for a period of nine months (“Option Period”) to purchase all the issued capital in Minera GS free from any debts, liens, charges, encumbrances or other adverse interests. Pacifico must also meet the minimum expenditure requirements for the project being the sum of 871,353 Mexican Pesos (approximately US$47,000) for Calendar year 2018. During the Option Period, Pacifico will have full access to the project and may complete all forms of exploration, including drilling.

Payments on definition of Resources

Completion of the acquisition is conditional upon the satisfaction or waiver of a number of conditions precedent, including but not limited to:

(a) the parties executing a formal sale and purchase agreement on customary terms (including the provision by the Vendor of warranties as to title, capacity, permitting, no material non-disclosures, other standard warranties for a transaction of this nature and indemnities in respect of such warranties);

(b) Pacifico being satisfied as at completion that there has been no material adverse change in relation to the assets and the assets are in good standing;

(c) each party obtaining all Governmental, statutory and regulatory approvals, consents and/or permits required to enable it to perform its obligations under this Agreement;

(d) Pacifico obtaining shareholder approval to proceed with the Acquisition (this condition is for the benefit of Pacifico and may only be waived by Pacifico).

The Vendors and Pacifico have each provided representations and warranties that are considered standard for agreements of this nature.

Simon Noon (Managing Director)
Phone: +61 (0)8 6266 8642
Email: [email protected]
About Pacifico Minerals Ltd
Pacifico Minerals Ltd (“Pacifico”) (ASX: PMY) is a Western Australian based exploration company with interests Australia and Colombia. In Australia the company is focussed on advancing the Borroloola West project in the Northern Territory. The Borroloola West Project covers an outstanding package of ground north-west of the McArthur River Mine (the world’s largest producing zinc – lead mine) with high potential for the discovery of world class base metal deposits. In Colombia the company is focussed on advancing its Berrio Gold Project. Berrio is situated in the southern part of the prolific Segovia Gold Belt and is characterised by a number of operational, artisanal-scale adits. The project is 35km from the Magdalena River which is navigable to the Caribbean Sea and has excellent infrastructure in place including hydro power, sealed roads, a water supply and telecommunications coverage.
Competent Person Statement
The information in this announcement that relates to the Violin Copper-Gold project is based on information compiled by Mr David Pascoe, who is a Member of the Australian Institute of Geoscientists. Mr Pascoe is contracted exclusively to Pacifico Minerals Limited. Mr Pascoe has sufficient experience which is relevant to the style of mineralisation and type of deposit under consideration and to the activity which he is undertaking to qualify as a Competent Person as defined in the 2012 Edition of the “Australasian Code for Reporting of Exploration Results, Mineral Resources and Ore Reserves”. Mr Pascoe consents to the inclusion in this announcement of the matters based on information in the form and context in which it appears.
Forward Looking Statements
Certain statements in this document are or maybe “forward-looking statements” and represent Pacifico’s intentions, projections, expectations or beliefs concerning among other things, future exploration activities. The projections, estimates and beliefs contained in such forward-looking statements necessarily involve known and unknown risks, uncertainties and other factors, many of which are beyond the control of Pacifico, and which may cause Pacifico’s actual performance in future periods to differ materially from any express or implied estimates or projections. Nothing in this document is a promise or representation as to the future. Statements or assumptions in this document as to future matters may prove to be incorrect and differences may be material. Pacifico does not make any representation or warranty as to the accuracy of such statements or assumptions.