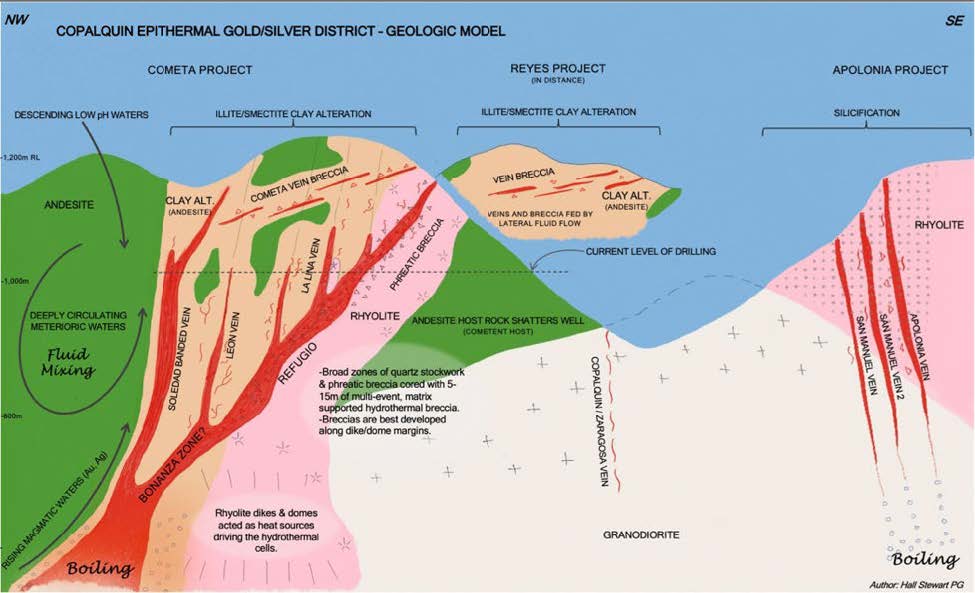 Mithril Resources Ltd (ASX: MTH) (Mithril or the Company) is pleased to provide an update on activities at its Copalquin Gold Silver Project in Mexico for the period ending 31 December 2020.

In December 2020 Mithril completed its maiden drill program completing 7,188 metres of HQ diamond core drilling using a man portable drill rig with helicopter assistance. The program was completed on time and within budget and achieved the goals for the 2020 exploration program in the Copalquin district.

Additionally, the maiden drill holes at the El Refugio target have shown the area to be part of a large epithermal system for gold and silver. The broad quartz breccia zones punctuated with high grade gold-silver veins was drill tested over 300m, building the model of a large gold-silver system characterised by extensive surface alteration and rhyolite dome intrusions. This alteration is observed to extend at least 1.5km west of El Refugio in addition to the widespread alteration and rhyolitic dome intrusives in the Copalquin district. The very high grade La Soledad and Leon veins intercepted at the start of the program are also part of this larger epithermal system. The extension of the Cometa project at depth and along strike is a key feature of the exploration for 2021.

Drilling at the epithermal system discovery at El Refugio, Cometa Project was completed with assays received and reported during the quarter. The drilling discovered what is interpreted to be the top of a large epithermal system for gold and silver in this part of the Copalquin district. The results from the last hole drilled at El Refugio confirmed the promise of higher grades and thicker intercepts deeper on the structure as predicted by the geologic model (Figure 1).

Drill hole CDH-033 intercepted high-grade gold and silver deeper in the structure previously intercepted by drill hole CDH-015, CDH-020 and the other holes at Refugio. There is abundant fine-grained pyrite above the zone and more chalcedony is observed in the intercept as well as milled fragments of chalcedony in the breccia which were likely derived from deeper in the system (multiple mineralisation events).

The mineralogy and textures observed in the core indicate the existence of stacked boiling zones and multiple mineralisation events. El Refugio is very near the upwelling zone of a hydrothermal cell where the breccia zone reaches widths of up to 30 meters true width.

Deeper drilling in January 2021, will further test the geologic model at the El Refugio target. Favourable surface alteration has been observed to the west of El Refugio, extending the exploration area across two ridges. Extensive soil sampling and mapping in this area commenced in January 2021.

Other drill hole highlights for the El Refugio target drilling at the Cometa Project during the quarter included:

Just east of El Refugio at the El Cometa target, a fence of shallow holes was drilled across the structure and perpendicular to the historic drill holes by UC Resources in 2004. The drilling has shown the structure to be continuous along strike and to host veins with erratic high-grade gold and silver. It is a complex vein system that requires further work to understand.

Holes drilled by UC Resources in 2004 to confirm the drilling completed by Bell Coast Capital Corp. in 1998 included the following intercept in UC-03. It is important to note that all the holes drilled by UC Resources and Bell Coast were drilled parallel to the El Cometa structure, intercepting high-grade veins. Mithril concludes that UC’s work is reliable (43-101 compliant), but that the high-grade values are discontinuous and erratically distributed within the El Cometa structure. This may be due to supergene enrichment of gold in the near surface environment.

Shallow drilling perpendicular to the historic drilling at the El Cometa target has intercepted the structure near surface with continuity along strike for almost 300m;

The drill data from the historic holes at the El Cometa target together with Mithril’s cross structure holes confirm the existence of a shallow-dipping breccia-vein system that hosts discontinuous high-grade veins. Mapping shows this vein system to continue east, 800m to the Los Pinos target and a further 500m to the Los Reyes target.

2 The UC Resources news releases were reported to the Canadian market under the NI43-101 guidelines and signed off by a qualified person. The drill results cannot be verified by Mithril and they cannot be used for JORC compliant resource and reserve estimations. The releases are available on the Mithril Resources website under Historic Drilling Reports.

The structural zone with mineralized veins occurs up to 20 metres wide at Los Reyes. Mineralized veins within the broad zone are separated by zones below reportable cut-off grade.

Closer spaced drilling in the El Cometa-Los Reyes structure will increase probability of intercepting the high-grade gold and silver domains.

Two scout drill holes were completed at the Los Pinos target, Reyes project. Hole CDH-043 was a 15m vertical hole drilled from the same drill pad to confirm geometry of the structure. CDH-043 was not assayed. The drill pad for hole CDH-042 and CDH-043 was built 17 meters from the planned coordinates and appears to have been drilled entirely in the footwall of the target structure. Los Pinos is a strong target area as highlighted by the 2018 soil sampling program. Drilling at this target is planned for 2021 following the completed and interpretation of the soil sampling program to the west of Los Pinos, at El Indio.

At the Apolonia Project, one kilometre south of the Reyes Project, two holes were completed targeting the near vertical veins beneath the historic San Manuel mine workings. The veins are known to change dip to the east and to the west. It appears that these first two holes have not intercepted the San Manuel veins due to the veins dipping away from the drills holes at this elevation. The next holes at San Manuel are designed to intercept the veins from the other side of the target at the same elevation.

The veins, stopes and extensive historic sampling in the San Manuel workings indicate significant past production from San Manuel mine. There is historic infrastructure in the area consisting of an aerial tramway and the ruins of a flotation mill below the San Manuel mine, part of the Apolonia Project. The historic workings cover approximately 75 metres vertically and 200 metres of strike.

To ensure the Company maintains its focus on the Copalquin Gold Silver Project, Mithril has exploration partners to farm-in, sole fund and operate exploration activities on its Australian assets. These include:

Having farm-in exploration partners solely fund all exploration costs, ensures that the Mithril tenements are kept in good standing for the duration of the respective partnership agreements with the potential to benefit from prospectivity and exploration upside.

The binding farm-in Heads of Agreement (Agreement) is conditional upon Mithril obtaining a Heritage Clearance to drill the Firetail Prospect. Mithril worked with the traditional owners of Billy Hills to obtain the necessary clearance however due to the outbreak of COVID-19, all dealings with Aboriginal communities in the area ceased for an indefinite period in order to protect the health of the local population. Mithril and CBH remain committed to the Project and agreed to extend the period, to satisfy the Agreement’s Condition Precedent, first from May 2020 to November 2020 and during the quarter a second extension to March 2021, in recognition of the current circumstances.

In September 2020, Carnavale undertook a small drilling program at its Grey Dam Nickel Project (including on Mithril tenements) following a Fixed Loop Electromagnetic (FLEM) geophysical surveying over ultramafic/mafic sequences prospective for Kambalda style nickel sulphide, similar to the nearby Black Swan and Silver Swan Nickel Mines. The drilling confirmed and enhanced the understanding of the geology of the drilled area. The geochemistry and multi- element assay results remain positive for the development of nickel sulphide mineralisation within the project area (see Carnavale’s ASX Announcement 6th November 2020).

Great Boulder Resources did not announce any work progress within the Mithril tenements during the quarter.

Auteco Minerals did not announce any work progress within the Mithril tenements during the quarter.

Outlook for the Next Quarter

The Company’s primary objective for the March 2021 Quarter is the recommencement of exploration in the Copalquin district, Mexico and continuation of drilling at the Cometa Project.

The Company has cash reserves of as at 31 December 2020 of $1m plus its post quarter share placement, raising $5m (before costs).

All resolutions considered at the Annual General Meeting on 24 November 2020 were put to a vote on a Poll, called by the Chairman, and were passed.

In line with its obligations under ASX Listing Rule 5.3.5, Mithril Resources Limited notes that the only payments to related parties of the Company, as advised in the Appendix 5B for the period ended 30 June 2020, pertain to payments to directors for fees, salary and superannuation.

About the Copalquin District, Mexico