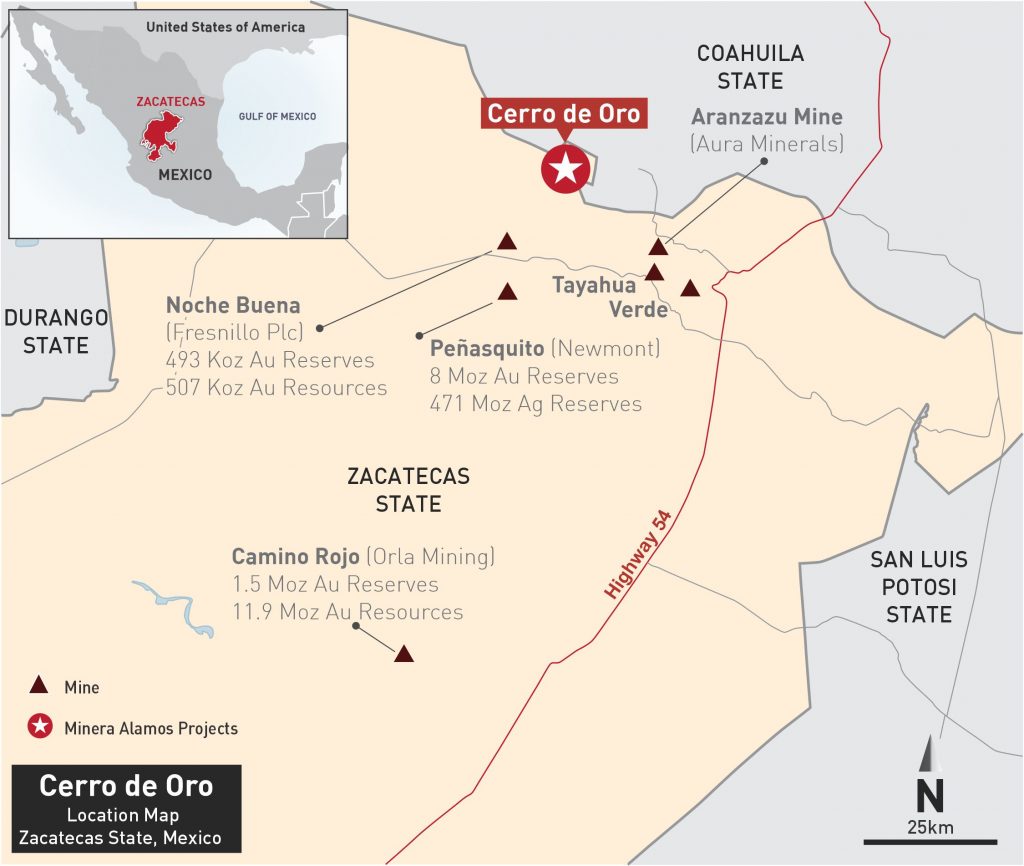 Toronto, Ontario and Vancouver, British Columbia–(Newsfile Corp. – September 15, 2020) – Minera Alamos Inc. (TSXV: MAI) (the “Company” or “Minera Alamos”) is pleased to announce it is continuing to review and compile the remaining historical drill data from the Cerro de Oro gold project in Zacatecas, Mexico (see news release dated August 4th, 2020). The project is located less than 3km from the town of Melchor Ocampo and approximately 30 km from the district’s mining hub at Concepcion del Oro. This area of north-central Mexico is famous for its mineral production, most notably related to gold and silver rich-intrusive-related deposits. Of particular note are a number of nearby large-scale mining operations including Peñasquito (Newmont) just 30km away, Tayahua (Frisco), Noche Buena (Fresnillo) and Camino Rojo (Orla).

Initial engineering studies are already underway while the Company works on a NI43-101 Compliant Mineral Resource Estimate for the project expected to be completed in late October.

“The drilling that took place in 2017 and 2018 confirmed the widespread nature of the surface cropping disseminated gold mineralization throughout the Cerro de Oro project area. Mineralization was present in almost every hole beginning from near surface and remaining open for additional testing at depth,” stated Darren Koningen, CEO. “As the Company works toward completion of an initial NI43-101 resource estimate we are seeing two well defined zones that are already the subject of early scoping and engineering work being conducted internally by our team. We look forward to the results of this preliminary work which will serve as the basis for permit application submittals in the coming months.”

Highlights of the 2017/18 Drill Campaigns

The disseminated gold and skarn related mineralisation at Cerro de Oro is represented by a gold porphyry system characterized by A, B, and magnetite veins with associated potassic alteration that is overprinted by phyllic alteration, with the gold mostly hosted by a porphyritic intrusive centre. The deposit appears to be divided into two zones (North and South) by an east-west fault. Initial drilling was conducted in the 1990’s by Noranda and was comprised of 20 widely spaced holes on approximately 100m to 200m spacings largely targeting the South Zone (see news release dated August 4th 2020).

The 2017-2018 drill programs completed by a private operator comprised approximately 4,000m of RC drilling and served to infill and confirm drilling in the South Zone as well as significantly expand the known extensions of the less defined North Zone.

Historical information from the 2017 and 2018 drilling programs is presented below in Table 1 for reference purposes (Note: As the drill results are historic in nature, Minera Alamos has not yet been able to fully verify the data disclosed, including sampling, analytical, and test data underlying the information included in the following tables.)

Mr. Darren Koningen, P. Eng., Minera Alamos’ CEO, is the Qualified Person responsible for the technical content of this press release under National Instrument 43-101. Mr. Koningen has supervised the preparation of, and has approved the scientific and technical disclosures in, this news release.

Minera Alamos is a gold development company poised to join the ranks of gold producers in 2021. The Company has a portfolio of high-quality Mexican assets, including the 100%-owned Santana open-pit, heap-leach development project in Sonora that is currently under construction, and which is expected to have its first gold production in early 2021. The newly acquired 100%-owned Cerro de Oro oxide gold project in northern Zacatecas that has considerable past drilling and metallurgical work completed and could enter the permitting process rapidly. The La Fortuna open pit gold project in Durango (100%-owned) has an extremely robust and positive preliminary economic assessment (PEA) completed and the Company is nearing the end of the permitting process for the project. A construction decision on La Fortuna could be made in late 2020 or early 2021, highlighting the organic growth the existing project portfolio can provide to the overall production profile. Minera Alamos is built around its operating team that together brought 3 mines into production in Mexico over the last 12 years.

The Company’s strategy is to develop very low capex assets while expanding the projects’ resources and continuing to pursue complementary strategic acquisitions.