TORONTO, Oct. 11, 2018 (GLOBE NEWSWIRE) — Magna Gold Corp. (TSXV: MGR.P) (“Magna” or the “Corporation”), is pleased to announce that it has entered into an arm’s length option agreement (the “Agreement”) dated September 25, 2018 (the “Effective Date”) with Beatriz Delia Yepiz Fong (the “Seller”), an individual resident in the Sonora State of Mexico. The Agreement is subject to regulatory approval.

Pursuant to the Agreement, the Corporation will acquire from the Seller an option (“Option”) to acquire a 100% undivided interest (the “Proposed Transaction”) in two mining claims (the “Mercedes Property”) located in the municipality of Yecora, Sonora, Mexica, for a four-year period. The Property consists of two contiguous claims covering an aggregate area of approximately 345 hectares is located approximately 250 kilometers east-southeast along the Federal Highway 16 from the state capital, Hermosillo.

In consideration of the grant of the Option, Magna will: (i) pay to the Seller an aggregate of US$1,340,000 plus VAT of 16%, paid in installments commencing on the 6th month from the Effective Date and ending on the 48th month from the Effective Date; (ii) issue to the Seller a 3% net smelter returns (“NSR”), capped at US$3,500,000 and subject to the right of the Corporation to acquire all 3 percentage points of the NSR at a price of $500,000 per percentage point, within the first three (3) years of commercial production of the Mercedes Property; and (iii) conditional on the completion of a going public transaction within six months of the Effective Date, issue 2,442,105 common shares (“Common Shares”) of the Corporation to the Seller. On the Effective Date, the Discounted Market Price of the Common Shares was $0.30 per Common Share.

Pursuant to the Policy, Sponsorship of a Qualifying Transaction of a capital pool company is required by the Policy, unless an exemption is obtained. The Corporation intends to seek a waiver to the sponsorship requirement. There is no assurance that an exemption will be granted.

Mercedes is an exploration property located within the Sierra Madre Occidental province (Figure 1), a historically productive, regionally extensive Tertiary volcanic field which stretches from the United States/Mexico border to Central Mexico. Previous work at the La Lamosa area, one of the mineralized targets within the mining concessions, reports disseminated gold mineralization hosted within an andesitic and rhyodacitic volcanic complex intruded by a quartz-feldspar porphyry (QFP). Gold and silver are target commodities sought at Mercedes and the property exhibits textures and alteration consistent with high sulphidation epithermal mineralization, typical of important discoveries in the region.

The project is located 43 km from Alamos Gold 3 Moz Mulatos Gold Mine, 40 km from Agnico’s 1 Moz La India Gold Mine, and adjacent to Minera Alamos’ Santana and Santa Rosa projects. Infrastructure and support services are available to the project; paved Federal Highway 16 passes through the western portion of the claims. Electricity, mail, phone services and accommodation are available at the nearby villages of Yecora and Santana. An electrical line (C.F.E.) passes through the property as it parallels the paved highway. 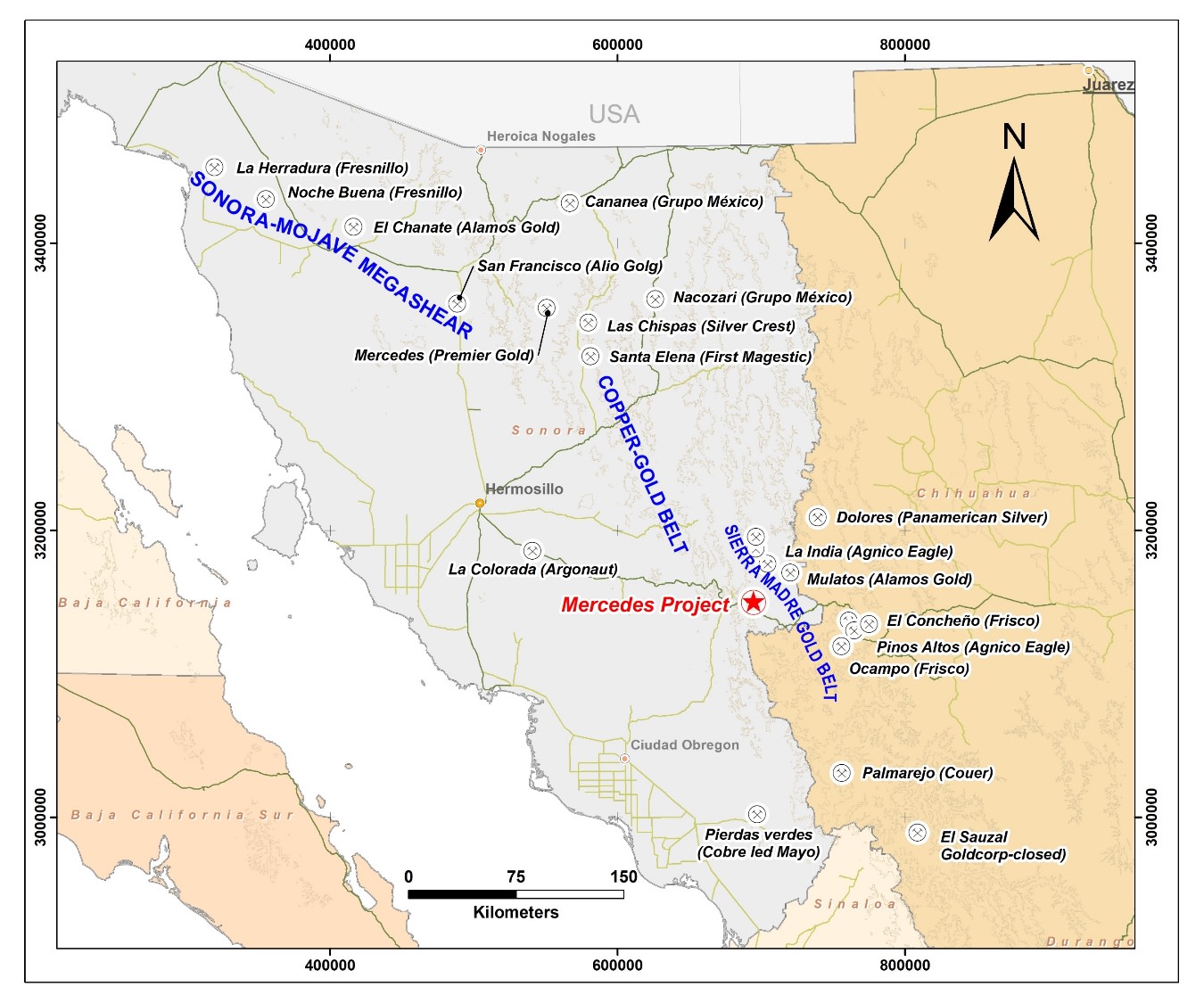 Mercedes is located toward the western edge of the mineral province and is predominantly underlain by intrusive rocks, granodiorite-monzonite plutonic rocks and quarts feldspar porphyry dykes and stocks exposed by erosion of intermediate and felsic volcanic packages of the lower and upper volcanic sequences.

The thick volcanic sequences are characteristic of the region and form much of the Sierra Madre Occidental. Outcrop in key areas of the property are strongly altered, brecciated intrusives and some propylitically altered volcanics. Zoned assemblages of silica, vuggy silica, phyllic, argillic and distal propylitic alteration are recognized. The main prospect area ‘La Lamosa’ is a prominent, highly oxidized red ridge, visible from the highway (see figure 2). At least two additional similar targets are clearly identified within the claim boundaries. 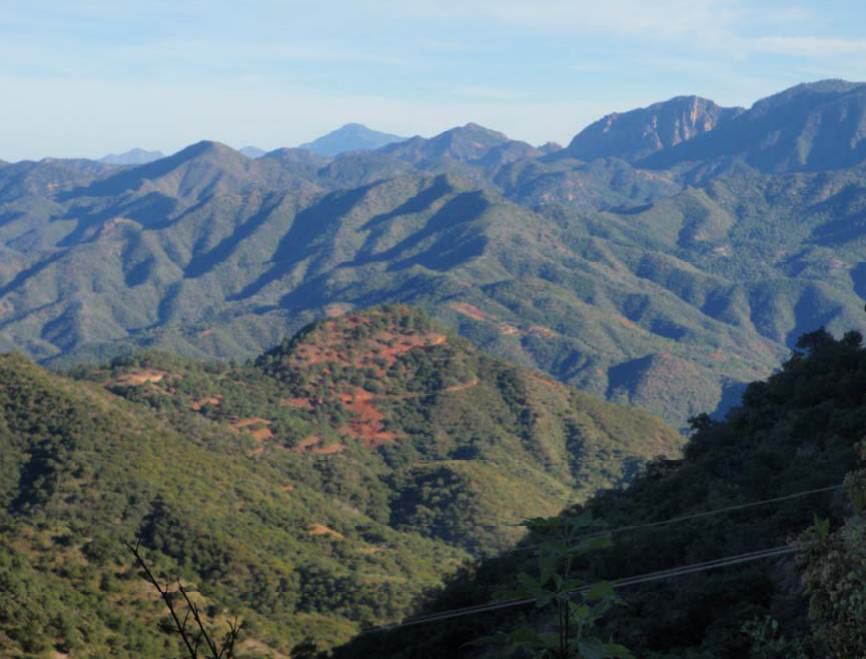 In addition to a small artisanal shaft developed on a thin quartz vein in the southeast of the property, previous exploration work includes two phases of drilling and extensive surface sampling by other explorers. In 1996 Compania Minera Fernanda SA de CV completed 15 Reverse Circulation holes for a total of 1018m and in 2008 Norma Mines SA de CV drilled 10 diamond drill holes for a total of 1133m. Both drill programs tested the La Lamosa area. Records for the RC drilling are incomplete though reference to the results indicate continuous, consistent gold and silver intercepts from beneath the alteration zone on the ridge. Diamond drilling conducted later by Norma mines did confirm the presence of broad anomalous grades but did not quite replicate the tenor of those previously reported. Gold occurs in oxide, mixed oxide/sulphide, and sulphide reported in previous drilling with pyrite being the primary sulphide mineral along with minor amounts of enargite. Selected drill mineralized intercepts are shown in the Tables 1 and 2:

Over the course of the years several Companies have carried out rock geochemistry work on the property. Obtained reports show strong oxidation in the form of hematite/limonite/jarosite staining and strong silica, vuggy silica and argillic alteration. Figure 3 and Table 3 below show the latest NI 43101 Technical Report data verification sampling. 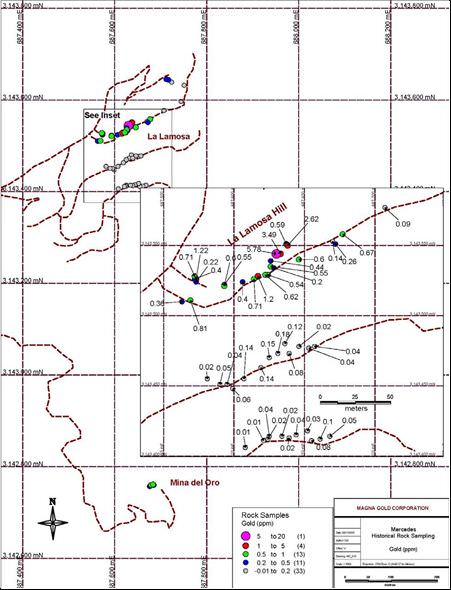 A mineral exploration program is being designed to both evaluate the property and determine the grade and extent of La Lamosa area. The program will consist of diamond drilling, property wide geological mapping and prospecting including collection of chip samples and soil sampling. The exploration will be designed to evaluate La Lamosa and identify additional analogous zones.

All technical information in this press release has been reviewed and approved by Dale Brittliffe, P.Geo., an independent consultant to the Corporation and a “Qualified Person” under National Instrument 43-101.

Management of the Resulting Issuer

Mr. Bonillas is a Mexican citizen and has over 35 years of experience in Mexican mining and exploration. He is currently Chairman of the Advisory Board of Discovery Metals, a Mexican-focused base metals exploration company whose securities are listed on the TSX, and Director of Telson Mining Corporation (formerly Telson Resources Inc.) whose securities trade on the TSXV. He is the former President and co-founder of Alio Gold Corp., formerly Timmins Gold Corp. (“Alio”). During his 10-year tenure with Timmins, he oversaw its transition from exploration and development to mid-tier gold producer, and guided it to several years of positive reserve and resource growth, throughput and production.

Mr. Tsakumis has over twenty-five years of investment experience with private and public companies. Mostly recently, Mr. Tsakumis was the Vice President of Corporate Development at Alio Gold Corp. for nine years, where he played a pivotal role in the development of the corporation from a junior exploration to a production company. He has also acted as Director and Vice President of Corporate Development for various publicly traded companies, one of which has its securities traded on the New York Stock Exchange, for over 10 years.

Ms. Nieves is a citizen of Mexico and is currently a lawyer. She is a founding partner at the firm DBR Abogados S.C. which specializes in mining and corporate law where she has gained extensive experience and knowledge on mining companies. She has served the mining and exploration industry for over 25 years as legal counsel to several North American public companies. Ms. Nieves has also served as a director of Marlin Gold Mining Ltd until May 2012 and is currently a director of Goldplay Exploration Ltd., both of which are listed on the TSXV. Ms. Nieves holds law degrees from both the Universidad Ibero-Americana where she studied European and North American Law, and Universidad Femenina de Mexico, where she obtained her law degree.

Mr. Soto is a Mexican citizen and has over 40 years of experience in the Mexican mining and exploration, over 25 years of experience as a senior executive of several exploration companies; widely recognized as one of the top mining professionals in the country, co-Founder of Timmins Gold Corp whom played an important role in the transition of the company from exploration to an operating company. During that time, led the 4x increase of San Francisco’s gold resource from 611 Koz to 2.4 Moz., active member of the Society of Economic Geologists.

Investors are cautioned that, except as disclosed in the management information circular or filing statement to be prepared in connection with the transaction, any information released or received with respect to the transaction may not be accurate or complete and should not be relied upon. Trading in the securities of a capital pool company should be considered highly speculative.

The TSX Venture Exchange Inc. has in no way passed upon the merits of the proposed transaction and has neither approved nor disapproved the contents of this press release.

CAUTIONARY STATEMENT REGARDING FORWARD-LOOKING INFORMATION: This news release includes certain “forward-looking statements”, which involves known and unknown risks, and are based upon a number of estimates and assumptions that, while considered reasonable, are subject to known and unknown risks, uncertainties, and other factors which may cause the actual results and future events to differ materially from those expressed or implied by such forward-looking statements. Such factors include, but are not limited to: general business, economic, competitive, political and social uncertainties; delay or failure to receive shareholder or regulatory approvals; and the results of continued business development, marketing and sales. There can be no assurance that such statements will prove to be accurate, as actual results and future events could differ materially from those anticipated in such statements. Accordingly, readers of this news release should not place undue reliance on forward-looking statements.

The Corporation disclaims any intention or obligation to update or revise any forward-looking statements, whether as a result of new information, future events or otherwise, except as required by law.