Perth-based lithium processing technologist, Lithium Australia NL (ASX: LIT) announced today that the Company had moved to a 54% controlling stake in the Electra lithium project in northwest Mexico. The project comprises the Tecolote, Tule, and Agua Fria concessions and is currently the subject of a farm-in and joint venture between Lithium Australia and Canadian-based partner, Alix Resources Corporation (TSXV: AIX). LIT has the right under the JV terms to earn an ultimate 65% holding in Electra. (Figure 1). Lithium Australia moved to the majority 54% ownership on completion of a recent drilling program.

This generated confirmation of a new 2.5 km long mineralised zone between 25-50 metres thick on the western flank of the Agua Fria concession in what the JV partners described as the project’s best discovery yet of deposition with potential mineable inventory. 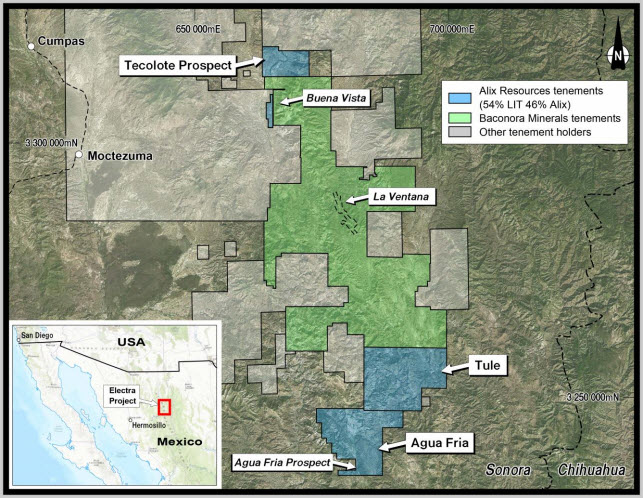 The terms of the acquisition of the joint venture for the Stage 3 earn-in were varied (See ASX Announcement 28 April 2017) as described in the table below. LIT was requested by Alix that its Stage 3 Joint Venture earn-in be accessed early to ensure the maiden drill campaign was not frustrated for lack of funds. All other terms of the Joint Venture Agreement remain fully enforceable.

LIT and AIX completed a drilling program on the Agua Fria property, Electra Project located in Sonora, Mexico (see ASX Announcement 1 September 2017). Drilling concentrated along a 6km length of various stacked beds of lithium prospective sediments that comprise the Agua Fria property. The highlight of the exploration program was the discovery of the “West Flank” lithium zone, which partially outcrops and trends NNW-SSE for more than 2,500 metres, on the western portion of the Agua Fria concession (Refer Figure 2).

The “West Flank” lithium target is the most significant commercial target as it outcrops and has the potential to deliver a mineral resource with very low stripping ratios. The West Flank is defined by:

The West Flank lithium zone is 25 to 50 metres in thickness and is dipping shallowly to the east, providing potential to realise a mineral resource of significant tonnage. Future efforts on the West Flank target will focus on identifying the stratigraphy and controls of higher grade lithium values close to surface, with zero to minimal strip ratio by open pit mining.

Metallurgical testing continues, having established that:

A large sample is currently being composited for further metallurgical studies. In addition to significant Li values, the clay horizons at Agua Fria are anomalous in potassium which may be recoverable as potassium sulphate, a major component of “NPK” fertilisers. This potentially adds a valuable by-product credit to the project’s economics. 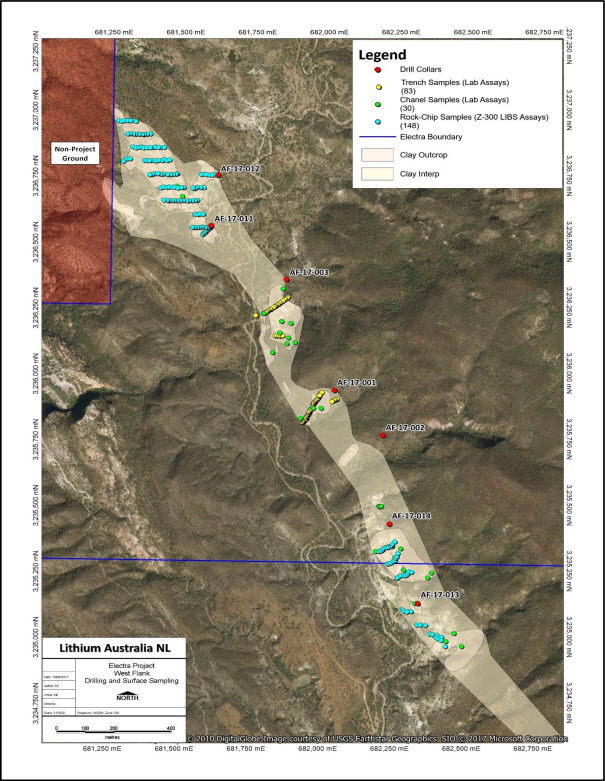 “The move to majority ownership at Electra and the emergence of the western flank of Agua Fria as a significant discovery with near-term potential, reflects the depth and scope of the Company’s unerring growth strategy to build a lithium business based on breakthrough processing technologies applicable to unconventional and once considered uneconomic feedstock sources, and to de-risk our strategy by evolving partnerships and project interests across the globe, as well as our flagship lithium interests across Western Australia. We will continue to partner closely with Alix to maximise the unfolding upside in Agua Fria in line with developments globally in the lithium-ion new battery era space.”

"We are very pleased with the advances made at Agua Fria with our partner Lithium Australia. Our respective companies have worked very well together and with LIT’s use of breakthrough technologies on our expanding discovery we feel we have the key to making Agua Fria a big success."

Further information in relation to this release can be found at http://www.alixresources.com/

Adrian Griffin
Managing Director
Mobile +61 (0) 418 927 658
[email protected]
ABOUT LITHIUM AUSTRALIA NL
LIT is a dedicated developer of disruptive lithium extraction technologies. LIT has strategic alliances with and investments in a number of companies, potentially providing access to a diversified lithium mineral inventory. LIT aspires to create the union between resources and the best available technology and to establish a global lithium processing business.
MEDIA CONTACT:
Adrian Griffin Lithium Australia NL08 6145 0288 | 0418 927 658
Kevin Skinner Field Public Relations 08 8234 9555 | 0414 822 631
Competent Persons Statement:
The information contained in the report that relates to Exploration Results together with any related assessments and interpretations is based on information compiled by Mr Adrian Griffin, Managing Director of Lithium Australia NL.
Mr Griffin is a Member of the Australasian Institute of Mining and Metallurgy and has sufficient experience relevant to the style of mineralisation under consideration and to the activity being reported to qualify as a Competent Person as defined under the 2012 Edition of the Australasian Code for Reporting of Exploration Results, Mineral Resources and Ore Reserves.
Mr Griffin consents to the inclusion in the report of the matters based on this information in the form and context in which it appears. The Company is not aware of any new information or data that materially affects the information in this report and such information is based on the information compiled on behalf of the company by Managing Director Mr Griffin.
Original Article: https://lithiumau.wpengine.com/wp-content/uploads/2016/11/LIT-16102017-LIT-takes-majority-ownership-of-Mexican-lithium-clay-project.pdf