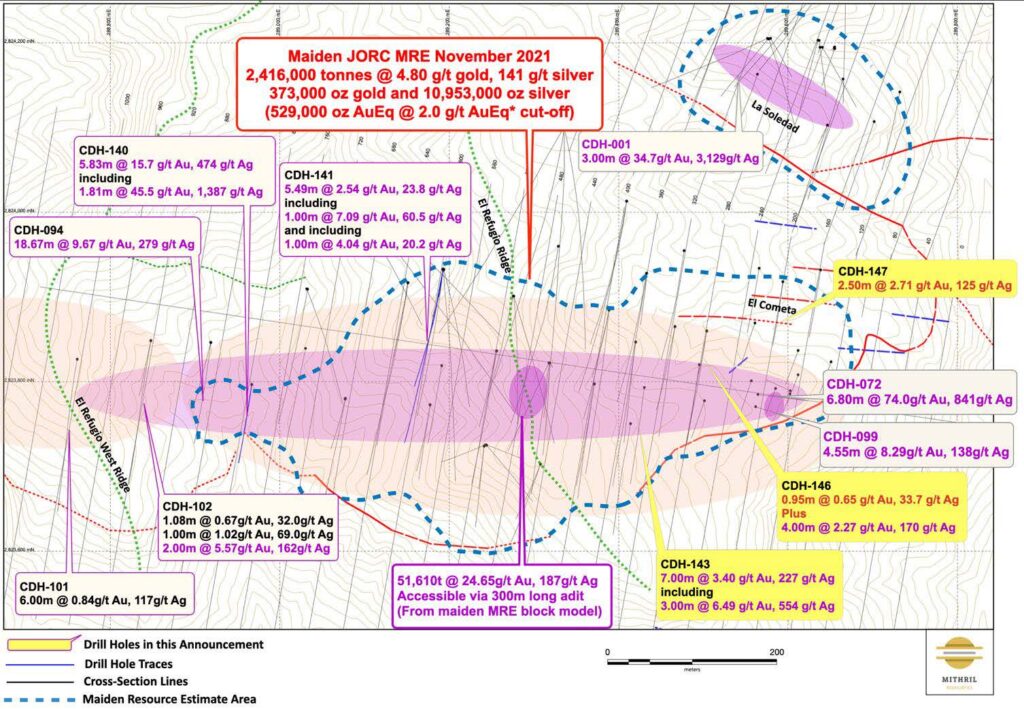 High-grade gold-silver intercepts at the eastern end of the El Refugio resource area, on sections 200 to 360

“The recent program of drilling at El Refugio has successfully extended and upgraded confidence both west and now east of the central El Refugio maiden resource area. Drilling continually intercepts high-grade mining widths as we progress work in this important part of the Copalquin Mining District. The drill core relogging program applying the past two years of drilling experience is opening up interpretation and opportunities, particularly for the more complex and high-grade La Soledad part of the maiden resource area and the eastern extension to Los Pinos. Drill core observations from the recent drilling point to significant ongoing resource depth potential for the major upwelling feeder zone at El Refugio as we progress the exploration program and development scenarios at Copalquin for resource expansion and gold-silver production.

The recent drilling at El Refugio has successfully intercepted the main structure and given further direction for future drilling to target the projected main upwelling feeder zone of the El Refugio hydrothermal system.

In May-June 2022, a program of six drill holes at El Refugio was completed, with three drilled from a location slightly oblique to the main structure, in order to reduce the length of the drill holes to reach the targeted depth. The program successfully achieved the objective of locating the main structure and confirming high-grade gold and silver on the western side of the El Refugio resource area while providing additional information for the location of the upwelling feeder zone. The previously reported intercept in hole CDH-137 of 5.67m @ 4.37 g/t gold, 174g/t silver from 331.33m, (CDH-137), including 1.67m @ 9.64 g/t gold, 399 g/t silver from 331.33 plus 1.00m @ 1.68 g/t gold, 67.2 g/t silver from 367.0m and 1.00m @ 1.27 g/t gold, 46.1 g/t silver from 370.0m filled a gap down dip on section 560 and drill hole CDH-136 confirms the downdip extension with some further high-grade gold and silver mineralisation and multiple intercepts.

The core relogging program is underway for La Soledad and El Refugio drilling which will enable the geologic interpretation to be updated using the most recent knowledge developed for this important part of the Copalquin Mining District. This information is being used to update the database and to further develop the geologic model for design of the next round of drilling to continue to develop this significant deposit, aiming to extend the resource growth deeper and towards a possible interaction between the main El Refugio and La Soledad structures.

The above figure shows an oblique view of the La Soledad-El Refugio vein and block models with traces of drill holes to date. Recent drill logs and results show significant depth potential of this major system and also indicate the general location of the El Refugio upwelling feeder zone and this is consistent with the epithermal gold-silver model shown in the figure below and further supported by the recent drill log observations.

Work is progressing to assess the first stage development options to optimally exploit the high-grade El Refugio resource. Recent drilling has been spaced across the strike of the mineralized zone to infill strategic areas. There are options to reduce the mine development meterage and to take advantage of topography and high-grade zones within the El Cometa-El Refugio resource on the eastern side of the deposit to potentially produce attractive development economics including low initial capital requirements and short payback period. Mining

Within 15 months of drilling in the Copalquin District, Mithril delivered a maiden JORC mineral resource estimate demonstrating the high-grade gold and silver resource potential for the district. This maiden resource is detailed below (see ASX release 17 November 2021).

*AuEq. = gold equivalent calculated using and gold:silver price ratio of 70:1. That is, 70 g/t silver = 1 g/t gold. The metal prices used to determine the 70:1 ratio are the cumulative average prices for 2021: gold USD1,798.34 and silver: USD25.32 (actual is 71:1) from kitco.com. Actual metal prices have not been used in resource estimate, only the price ratio for the AuEq reporting.

Mapping and rock chip sampling of a north-south oriented structure at El Guamuchilito has been completed. Aerial drone surveying will continue until the end of the dry season usually around mid-late June.

Released with the authority of the Board. For further information contact:

Mr Stewart has sufficient experience of relevance to the styles of mineralisation and the types of deposits under consideration, and to the activities undertaken, to qualify as a Competent Person as defined in the 2012 Edition of the Joint Ore Reserves Committee (JORC) Australasian Code for Reporting of Exploration Results, Mineral Resources and Ore Reserves. Mr Stewart consents to the inclusion in this report of the matters based on information in the form and context in which it appears.

The information in this report that relates to metallurgical test results, mineral processing and project development and study work has been compiled by Mr John Skeet who is Mithril’s CEO and Managing Director. Mr Skeet is a Fellow of the Australasian Institute of Mining and Metallurgy. This is a Recognised Professional Organisation (RPO) under the Joint Ore Reserves Committee (JORC) Code.

Mr Skeet has sufficient experience of relevance to the styles of mineralisation and the types of deposits under consideration, and to the activities undertaken, to qualify as a Competent Person as defined in the 2012 Edition of the Joint Ore Reserves Committee (JORC) Australasian Code for Reporting of Exploration Results, Mineral Resources and Ore Reserves. Mr Skeet consents to the inclusion in this report of the matters based on information in the form and context in which it appears. The Australian Securities Exchange has not reviewed and does not accept responsibility for the accuracy or adequacy of this release.

The Australian Securities Exchange has not reviewed and does not accept responsibility for the accuracy or adequacy of this release.

Endeavour Silver Continues to Intersect High-Grade Mineralization at the Guanacevi Mine including 3.54 g/t Gold and 1,129 g/t Silver for 1,412 g/t Silver Equivalents over 7.28 meters

Back to Basics with Copper and Oroco

You Asked and We Listened: The Top 5 Most Asked Questions (part 14)

Have All The Major Silver Deposits Been Found? – Dr. Peter Megaw