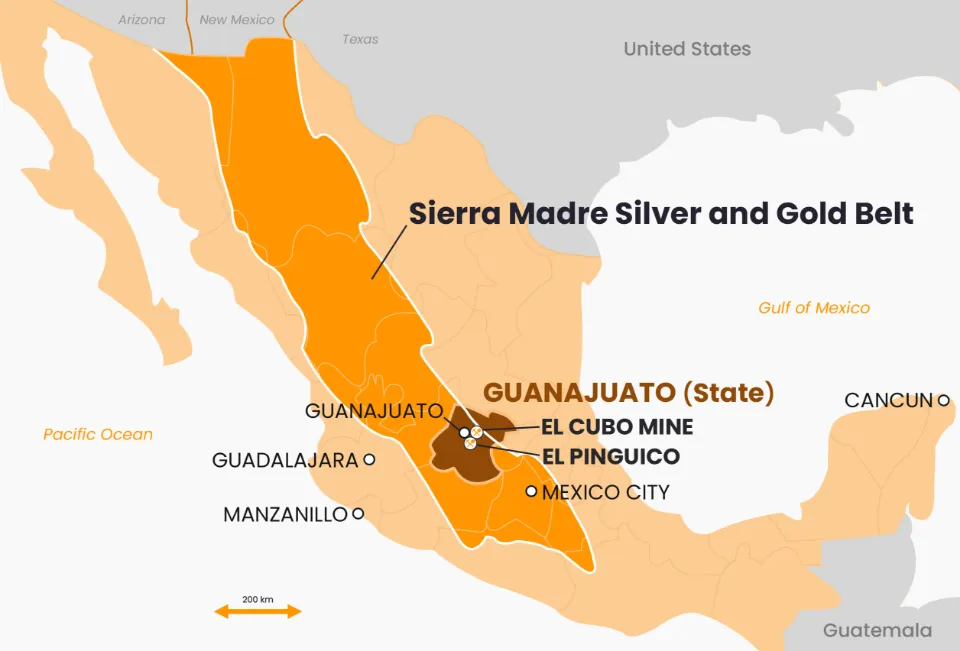 VANCOUVER, BC / ACCESSWIRE / June 22, 2022 / Guanajuato Silver Company Ltd. (the “Company” or “GSilver“) (TSXV:GSVR)(OTCQX:GSVRF) is pleased to report the discovery of high-grade gold and silver material in an historical tailings area at the Company’s wholly owned El Cubo Mine Complex in Guanajuato, Mexico.

Commenting on this news, James Anderson, Chairman & CEO said, “Our intention is to add additional silver and gold concentrate production through an independent gravity separation circuit. This will allow us to expand overall production at El Cubo without interfering with the regular flow of material through our processing facility. GSilver’s ability to identify and then rapidly act upon this opportunity is demonstrative of the technical quality of our Mexican operating team. Going forward, we plan to investigate and subsequently exploit similar development opportunities that we believe exist within the Guanajuato mining district, where processing of precious metals has been ongoing for over 450 years.”

The Mastrantos IV tailings facility is located approximately 3km from the El Cubo mill and had an operational history dating principally between 1986 to 2003, during which time the price of gold generally traded below US$400 per ounce. Also, most of the Mastrantos IV material comes from El Cubo’s Santa Cecilia area which at that time was encountering bonanza gold grades. These combined circumstances may have contributed to the low gold recoveries and the high-grade values left in the tailings.

The target area at Mastrantos IV is a gold and silver mineralized layer starting at surface and extending to approximately 1.5 meters in depth; a total of 134 shallow holes (drilled to approximately 2.0m total depth) were drilled over an area of more than 43,000sq. meters. Silver equivalent (AgEq) results for each hole are included in Figures 1 and 3 below; higher grades of greater than 250 gpt AgEq are common and make up the majority of the drillholes that define this mineralized layer. GSilver has not undertaken a NI 43-101 resource estimate for this mineralized material; however if metallurgical tests support economic viability, GSilver plans to begin processing the Mastrantos IV material as soon as practicable.

Preliminary testing to date, which has included a bulk sample and numerous metallurgical trials completed in conjunction with the University of Guanajuato’s School of Mines, has demonstrated encouraging results. Once final metallurgical tests are completed, the Company plans to extract the gold and silver content from Mastrantos IV using a gravity extraction circuit.

The El Cubo Mine has been in almost continuous operations for the past 200 years. GSilver will continue to investigate additional opportunities for tailings reprocessing from other tailing facilities located on its properties – many of which pre-date Mastrantos IV.

Note: All silver equivalent (AgEq) values are calculated based on a long-term gold to silver price ratio of 80:1 as used by mineral industry advisors, Behre Dolbear and Company (USA), Inc., in the Company’s NI 43-101 PEA report with the effective date of January 31, 2021; a copy of which is available for review on SEDAR.

Drill core was first reviewed by a Company geologist, who identified and marked intervals for sampling. The marked sample intervals were then cut in half; half of the core was left in plastic bag, and the other half was placed in additional plastic bags, sealed and labeled. Intervals and unique sample numbers are recorded on the drill logs and the samples are sequenced with standards and blanks inserted according to a predefined QA/QC procedure. The samples are maintained under security on site until they are shipped to the analytical lab. The analytical work reported on herein was performed by Corporacion Quimica Platinum S.A de C.V., Silao, Guanajuato, Mexico (Uncertified Laboratory). To validate our assay results and our preparation procedures, GSilver sends additional random samples representing approximately 20% of all analytical samples to Bureau Veritas in Hermosillo, Sonora, Mexico. Bureau Veritas is an ISO/IEC (International Organization for Standardization/International Electrotechnical Commission) geo-analytical laboratory and is independent of GSilver and its “qualified person”. Core samples were subject to crushing at a minimum of 70 per cent passing two millimeters, followed by pulverizing of a 250-gram split to 85 per cent passing 75 microns. Gold determination was via standard atomic absorption (AA) finish 30-gram fire assay (FA) analysis, in addition to silver and 34-element using fire assay and gravimetry termination. Following industry-standard procedures, blank and standard samples were inserted into the sample sequence and sent to the laboratory for analysis. Data verification of the analytical results included a statistical analysis of the standards and blanks that must pass certain parameters for acceptance to ensure accurate and verifiable results. GSilver detected no significant QA/QC issues during review of the data and is not aware of any sampling, recovery or other factors that could materially affect the accuracy or reliability of the data referred to herein.

Hernan Dorado Smith, a director and officer of GSilver and a “qualified person” as defined by National Instrument 43-101, Standards of Disclosure for Mineral Projects, has approved the scientific and technical information contained in this news release.

GSilver mines and processes silver and gold concentrate from its El Cubo mine and mill. The Company continues to delineate for additional silver and gold resources through underground drilling at El Cubo and its nearby El Pinguico project. Both projects are located within 11km of the city of Guanajuato, Mexico, which has an established 480-year mining history.

This news release contains certain forward-looking information and statements, which relate to future events or future performance including, but not limited to, the potential quantity, gradesand recovery rates of mineralized material contained within the historic ‘Mastrantos IV‘ tailings facility and the potential for additional mineralized material in other historic tailings facilities at El Cubo or elsewhere, the Company’s plan to begin processing of mineralized material from ‘Mastrantos IV‘ upon receipt of favorable metallurgical test results, the gravitational separation method to be used and the estimated timing thereof, and the Company’s expectations for expanding overall production at El Cubo without interfering with the current flow of materials through the El Cubo processing facility and generating additional revenue from Mastrantos IV and potentially other historic tailings facilities in and about Guanajuato, Mexico. Such forward-looking statements and information reflect management’s current beliefs and are based on information currently available to and assumptions made by the Company; which assumptions, while considered reasonable by the Company, are inherently subject to significant operational, business, economic and regulatory uncertainties and contingencies. These assumptions include: our estimates of the overall volume of mineralized material at Mastrantos IV and the grades thereof and the assumptions upon which they are based, including geotechnical and metallurgical characteristics of the mineralized material conforming to sampled results and metallurgical performance; tonnage of mineralized material to be mined and processed; resource grades and recoveries; assumptions and discount rates being appropriately applied to production estimates; success of the Company’s mining operations at Mastrantos IV; prices for silver and gold remaining as estimated; currency exchange rates remaining as estimated; availability of funds for development of Mastrantos IV, capital, decommissioning and reclamation estimates; prices for energy inputs, labour, materials, supplies and services (including transportation) remaining as estimated; no labour-related disruptions; no unplanned delays or interruptions in scheduled construction and production; all necessary permits, licenses and regulatory approvals are received in a timely manner; and the ability to comply with environmental, health and safety laws. The foregoing list of assumptions is not exhaustive. Readers are cautioned that such forward-looking statements and information are neither promises nor guarantees, and are subject to risks and uncertainties that may cause future results to differ materially from those expected including, but not limited to, market conditions, rising inflation, supply chain disruptions, availability of financing, currency rate fluctuations, actual results of development and production activities, actual resource grades and recoveries of silver and gold, unanticipated geological or structural formations and characteristics, environmental risks, future prices of silver, gold and other metals, operating risks, accidents, labour issues, equipment or personnel delays, delays in obtaining governmental or regulatory approvals and permits, inadequate insurance, and other risks in the mining industry. There are no assurances that GSilver will be able to develop and produce concentrate from the historic tailings at Mastrantos IV to deliver the tonnage, grades, recoveries, and revenue from precious metals concentrate sales at the costs and within the timetable anticipated. In addition, GSilver’s plan to begin processing mineralized material from Mastrantos IV following receipt of favorable metallurgical results is not based on a feasibility study of mineral reserves demonstrating economic and technical viability and therefore is subject to increased uncertainty and risk of failure, both economically and technically. Mineralized materials that are not Mineral Reserves do not have demonstrated economic viability, are considered too speculative geologically to have the economic considerations applied to them, and may be materially affected by environmental, permitting, legal, title, socio-political, marketing, and other relevant issues. There are no assurances that the processing of mineralized material from Mastrantos IV will generate revenues or positive cash flow in the amounts anticipated or at all. There is also uncertainty about the ongoing spread of COVID-19, the war in Ukraine, rising inflation and interest rates (both domestically and abroad) and the impact they will have on the Company’s operations, supply chains, ability to access El Cubo and/or El Pinguico or procure equipment, supplies, contractors and other personnel or raise capital on a timely basis or at all and economic activity in general. All the forward-looking statements and information made in this news release are qualified by these cautionary statements and those in our continuous disclosure filings available on SEDAR at www.sedar.com. The forward-looking statements and information are made as of the date hereof and the Company does not assume any obligation to update or revise them to reflect new events or circumstances save as required by law.