Goldplay Provides a Corporate Update on its Mexican Projects

October 5, 2018, Vancouver, BC – Goldplay Exploration Ltd. (TSXV: GPLY, OTCQB: GLYXF – the “Company” or “Goldplay”) is pleased to provide a corporate update on the Company’s Mexican projects. While the current focus is on updating the resource on the San Marcial Project, plans are being finalized for the exploration of new targets on the El Habal Project, both located in the rich Rosario Mining District of Sinaloa, Mexico.

In the short period since Goldplay announced its acquisition of the San Marcial Project from SSR Mining (TSX: SSRM) back in May 2018, the Company’s technical team has been rapidly reviewing existing data on the project to uncover its full potential.

Earlier this year, historical drill core from 22 drill holes completed in 2010, was unearthed by the Company, having been stored away in a neighboring State and was relocated to the Company’s base in Sinaloa. Goldplay now has possession of all the existing drill core from the San Marcial Project. In the process of re-logging the old core, Goldplay found many of the 2010 drill holes had not previously been fully sampled, or were only partially sampled. The Company’s geologists determined that many zones of unsampled core contained prospective mineralization.

This has provided the Company with a valuable asset – a library of “new” drill core that has the potential to expand the size of the San Marcial deposit at very low cost. Goldplay initiated an aggressive core sampling program to quickly assess the potential of the previously unsampled core, as well as undertaking a number of re-sampling tests to validate historical assays.

In a series of announcements since 16 August, 2018, Goldplay has identified significant intervals of high grade silver mineralization in the sampled drill holes. The silver mineralization is associated with a significant hydrothermal breccia that outcrops at surface (Figure 1) and extends beyond the deepest of the 52 existing holes drilled historically into the deposit (Figure 2). Recent high grade results have expanded the deposit outline as shown in the longitudinal section (Figure 3).

In addition to the high grade results of the main hydrothermal breccia zone, it is evident that additional new zones of high grade silver mineralization are present. In drill hole SM-10-09 (results previously released), a high grade interval of 501 g/t Ag was intersected near the bottom of the hole, 152 m downhole from the main zone mineralization (Figure 2). Another important development from the sampling of SM-10-09 is that in the footwall of the main breccia mineralization there are zones of stockwork style mineralization that contain low grade, but anomalous, gold values (Figure 2). This indicates that the San Marcial Project is a highly productive multi-phase mineralized system and provides the potential for further upside. 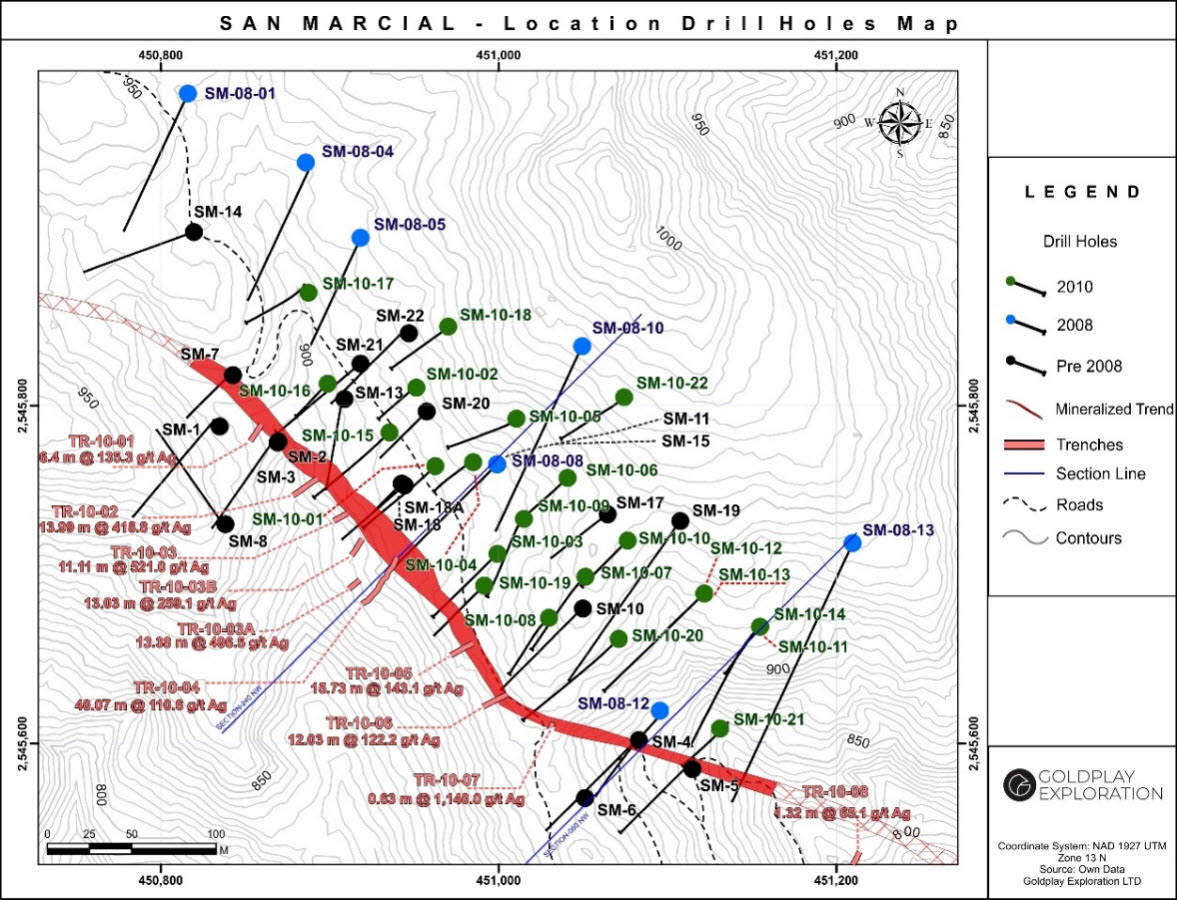 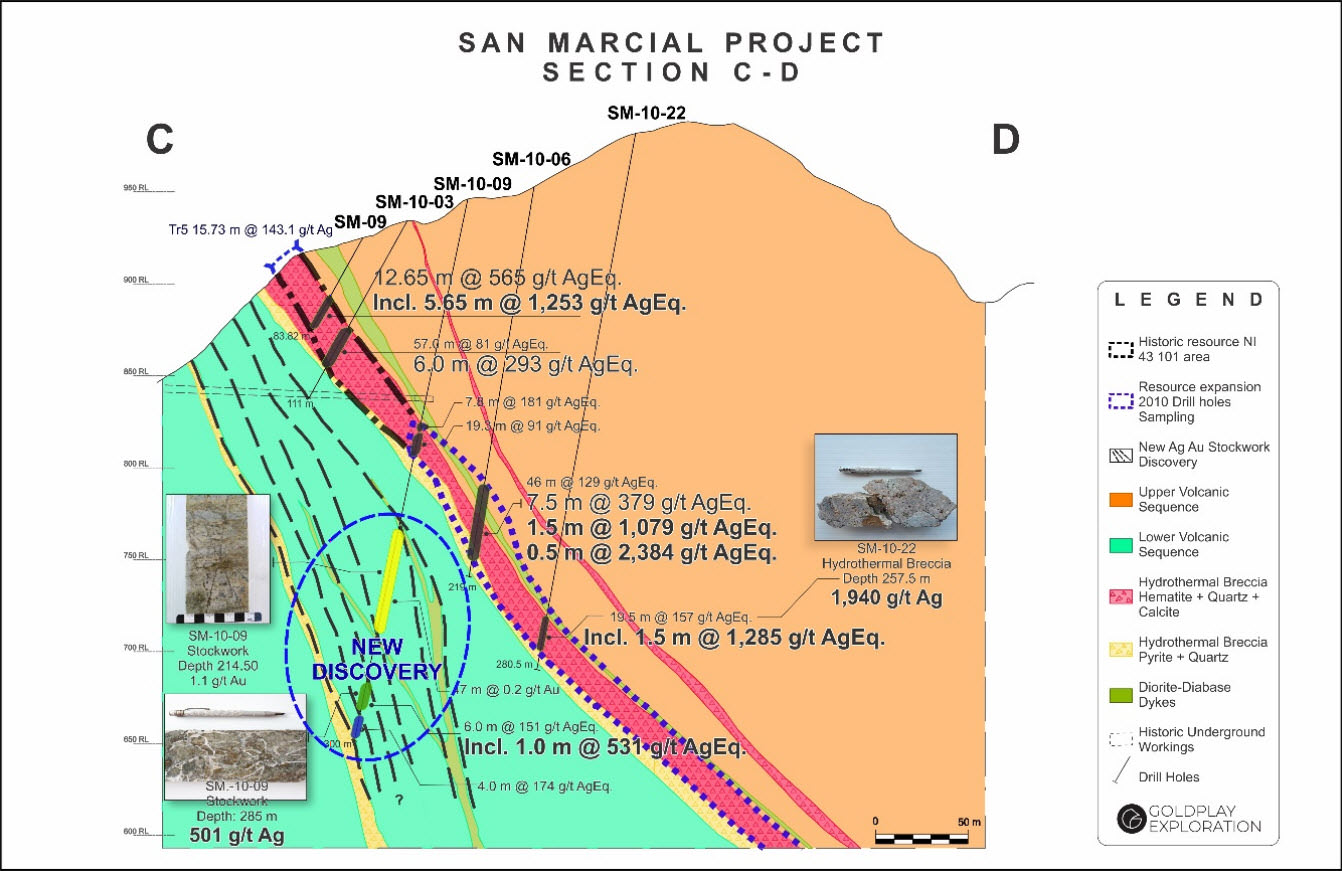 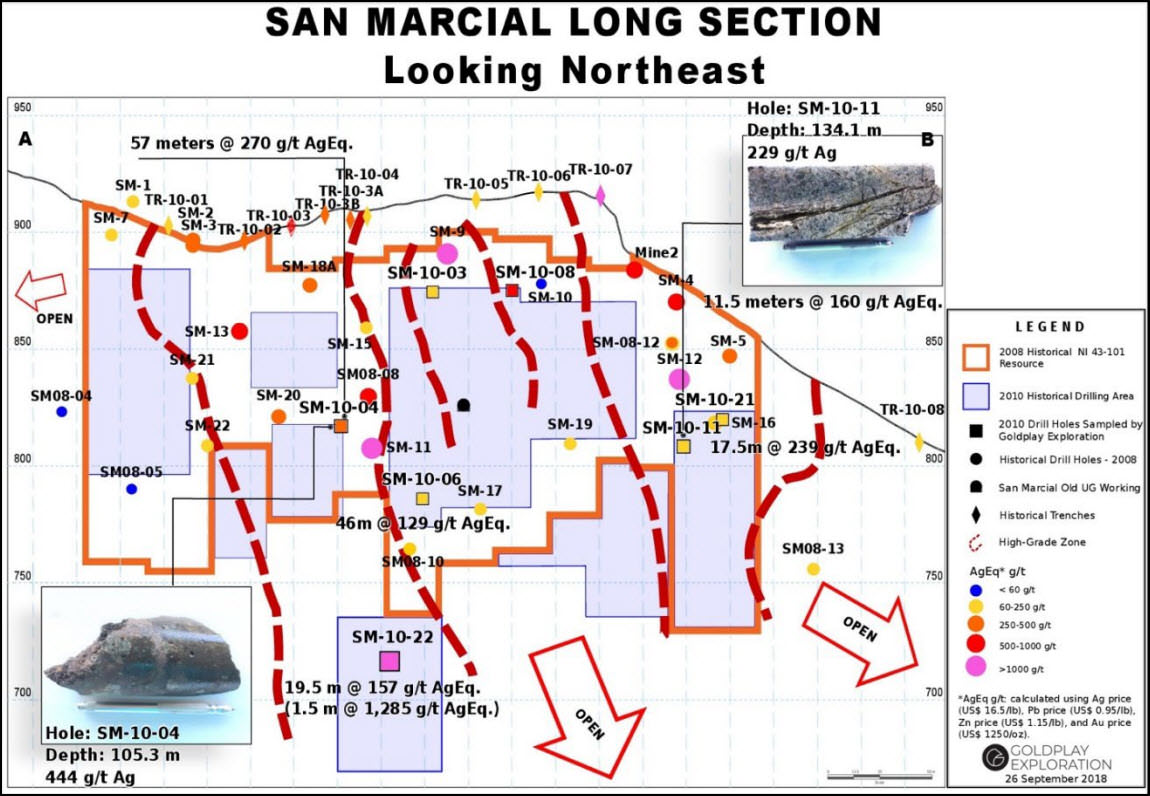 San Marcial expansion – As the sampling of existing drill core is being completed, re-logging of the core has been used to reinterpret the cross sections and to create a 3D model of the deposit. This model will be used to undertake an NI 43-101 compliant resource estimate that will add the 2010 drill holes as well as a reinterpretation of older 2008 drill holes. The new resource estimate is scheduled for completion before the end of 2018. A longitudinal section (Figure 3) confirms that the mineralization remains open both along strike and down dip, providing further potential for extensions to the deposit.

Regional exploration – The existing San Marcial silver resource and drilled extent covers a strike length of approximately 500 m of the exposed hydrothermal breccia (Figure 1). However, the mineralized trend has been identified over a length of 3.5 km (Figure 4). The remaining 3 km of the mineralized trend is essentially unexplored providing significant upside potential for resource expansion.

Goldplay geologists have commenced ground exploration along the key structure with the objective of identifying additional mineralization and priority target areas for drilling. Including the strike extensions of the mineralized breccia, 14 discrete targets have been identified for follow up (Figure 4). Goldplay has divided the San Marcial area into 6 discrete areas (Figure 4) to be explored over the coming months. 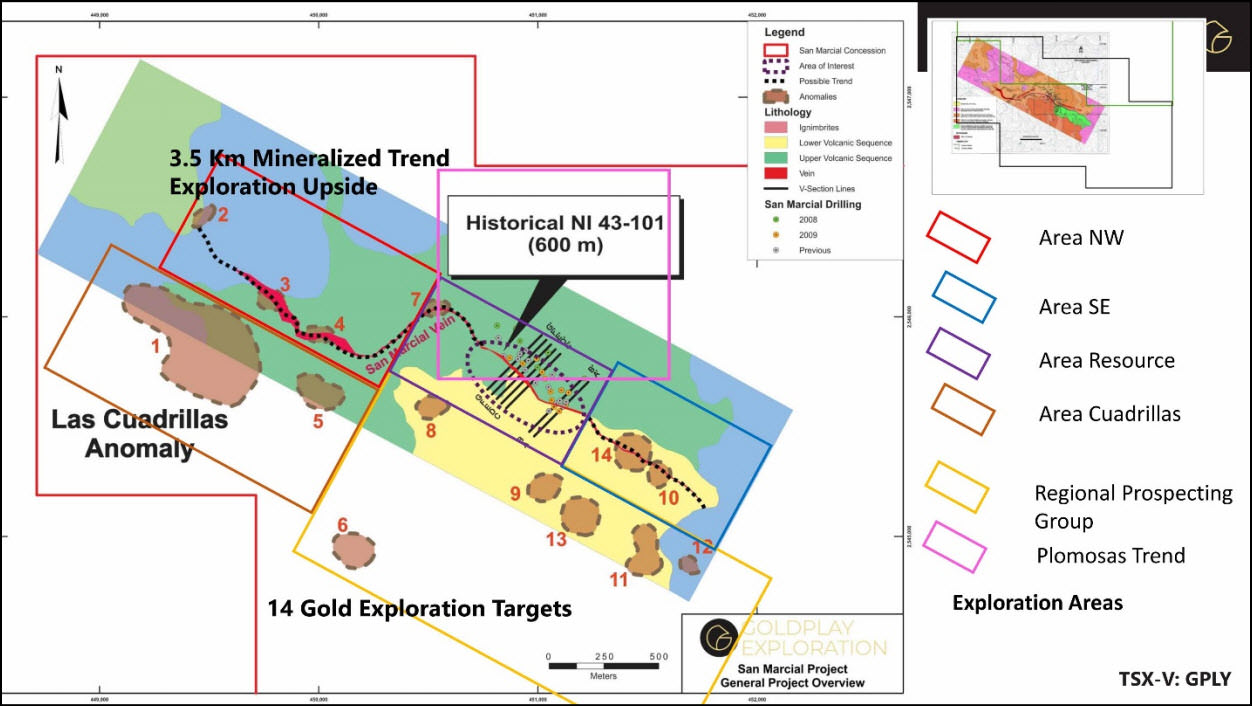 Goldplay has now completed its first round of drilling at the El Habal Project, where the Company identified a 6 km-long, northwest trending mineralized corridor (Figure 5). Eleven diamond core holes were completed for a total of 2,493.8 meters, testing the first of numerous targets in the 1,738.9 hectare, 100%-owned concession.

The table below (Table 1) summarizes the best intercepts from the eleven hole El Habal drill program. Drill holes 18EH-1 and 18EH-2 (previously reported) intersected wide zones of gold mineralization close to surface and represent the down dip extensions of mineralization encountered in nearby surface trenches. While the wide zones are anomalous but low grade, higher grade sections are evident within the broad mineralized package, such as 1.45 m at 10.45 g/t Au (18EH-1) and 3.45 m at 5.02 g/t Au (18EH-2). 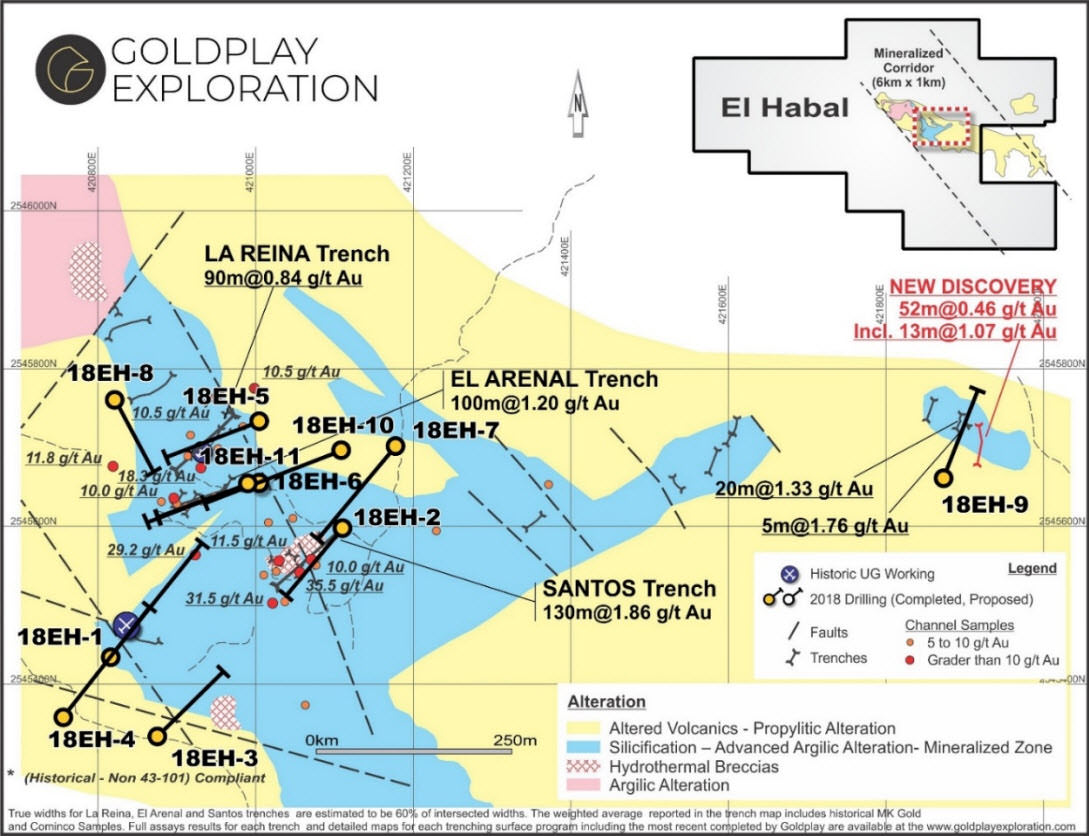 Note: Numbers may be rounded. Insufficient information is available to confirm the true width of the mineralization, and as such widths are reported as down hole intervals. Remaining holes in the program did not return values greater than 0.2 g/t Au over down hole widths greater than 3 meters.

Drill holes 18EH-8 and 18EH-11 also intersected anomalous gold zones associated with structures within the first 100 m below surface, while anomalous mineralization was encountered as deep as 192.1 m (down hole) within drill hole 18EH-6 (Table 1). The remaining holes in the program did not return values greater than 0.2 g/t Au over lengths greater than 3 meters, despite obvious evidence of potential source structures, breccias, stockworks and associated alteration in all drill holes. The first four holes of this program (18EH-1 to 18EH-4) were previously announced in a release dated 1 August, 2018.

In addition to gold mineralization, the program also intersected zones in drill core of anomalous silver (individual results up to 1 m at 41 g/t Ag), zinc (up to 0.8 m at 4,780 ppm Zn) and lead (up to 1 m at 2,060 ppm Pb), providing further evidence of a multi-phase mineralizing system.

Drill results and geological interpretation of these 11 holes have provided valuable knowledge to enhance ongoing exploration at El Habal. The El Habal drill program has outlined an intense stockwork system, brecciation and multiphase intrusive units within the broader lower-grade intercepts, while higher grade gold results represent zones of more intensive brecciation and silicification. These features indicate that the mineralization is most likely the result of an intrusive related gold system. Further drilling will be required to determine continuity of the wide intersections and high grades reported so far from the drilling and surface trenching, and how they connect with the broader regional structures within the concession.

In addition to the drilling program at the Arenal, La Reina and Santos targets, Goldplay has been advancing a number of other targets within the large 1,738.9 hectare concession.

Geophysics – Earlier this year, the Company completed a ground geophysical program of magnetics and CSAMT over a 325 hectare area, which has provided numerous new targets within the El Habal concession. A specialist consultant – Mr. Nick Winer – reviewed the data and identified various targets, as shown in Figure 6, that indicate an intrusive related gold system (IRGS) as a possible source of mineralization at El Habal.

His interpretation incorporated geological mapping, alteration, structural, geochemical and geophysical information. He describes the El Habal Project as a high level gold deposit with base metal overprinting associated with intrusion related hydrothermal fluids. This opens up the potential for a deeper gold-bearing mineralized system.

Soil sampling – Goldplay has collected 478 soil samples over three prospective areas (Figure 6): to the northwest of the drilling area (La Española), to the east (Octavia) and to the south (Zona Sur), utilizing a 100 m x 25 m grid pattern. The La Española and Octavia grids were designed to cover extensions to key structures thought to be controlling features in the distribution of local and regional gold mineralization, whereas the Zona Sur grid is covering an interpreted buried intrusive,

Results from the multi-element soil sampling program are pending. 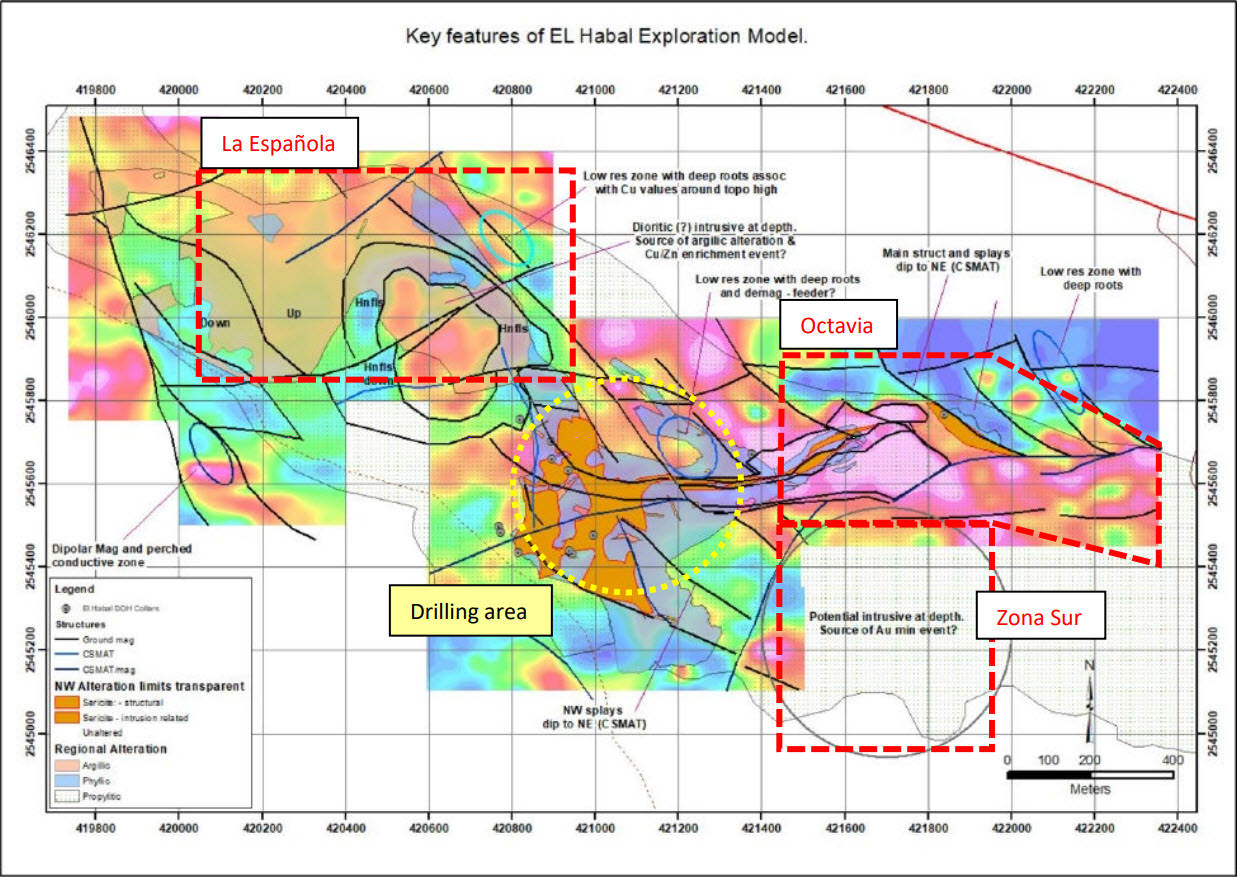 As noted above, a review of the El Habal Project by respected consultant Nick Winer, has defined a new intrusive related model for the mineralization. In doing so, a number of new targets have been identified. Some of these targets have been covered by the recent soil sampling program. Results from the three soil sampling grids completed by Goldplay to date, combined with La Española Octavia Drilling area Zona Sur historical soil sampling results, will be reviewed to identify important geochemical indicators towards key mineralization and structural controls at El Habal.

Detailed geological mapping and sampling will be undertaken, particularly around anomalies generated by the soil sampling program, to interpret the relationship with known mineralization in the workings, trenches and drill intercepts of the recently drilled El Habal area. Further structural mapping of surface and underground exposures will be undertaken to fully understand the key structural controls on the distribution of gold mineralization.

Additional modeling of the geophysical information from earlier this year is also underway to interrogate the data to improve interpretation of the sub surface geology and to generate new targets for follow up. Once targets are assessed, confirmed and prioritized, Goldplay will look to test them with another drill program.

The Qualified Person under the NI 43-101 Standards of Disclosure for Mineral Projects for this news release is Marcio Fonseca, President and CEO of Goldplay, who has reviewed and approved its contents.

The San Marcial land package consists of 1,250 ha, located south of the La Rastra and Plomosas historical mines and 20 km from the Company’s 100% owned El Habal Project in the Rosario Mining District, Sinaloa, Mexico. San Marcial is an attractive, near-surface high-grade silver, lead and zinc project for which a historical resource estimate has been previously disclosed.

The El Habal Project is a drilling stage project with an ongoing drill program. The oxidized gold mineralized zone outcrops along a series of rolling hills with evidence of historical shallow underground mining along a 6 km long prospective corridor. The El Habal Project is located near the historical gold-silver Rosario Mine which reportedly operated for over 250 years. Goldplay’s team has over 30 years of experience with senior roles in exploration, financing, and development in the mining industry, including over ten years of extensive exploration experience in the Rosario Mining District, leading to previous successful discoveries. A current NI 43-101 report on the El Habal Project is filed on SEDAR.