COLORADO SPRINGS – October 31, 2017 – Gold Resource Corporation (NYSE American: GORO) (the “Company or GRC”) reported production results for the third quarter ended September 30, 2017 of 6,465 ounces of gold and 392,153 ounces of silver, which along with base metal revenue generated $31.1 million in net revenue and $4.6 million in net income for the quarter. Gold Resource Corporation is a gold and silver producer, developer and explorer with operations in Oaxaca, Mexico and Nevada, U.S.A. The Company has returned $110 million to its shareholders in monthly dividends since commercial production commenced July 1, 2010, and offers its shareholders the option to convert their cash dividends into physical gold and silver and take delivery.

Gold Resource Corporation’s Aguila Project sold 10,573 precious metal gold equivalent ounces at a total cash cost of $2 per ounce (after by-product credits), benefiting from strong base metal production and sales. Average realized metal prices during the quarter included $1,289 per ounce gold and $17.00 per ounce silver*. The Company recorded net income of $4.6 million, or $0.08 per share. The Company paid $0.3 million to its shareholders in dividends, or $0.005 per share during the quarter. Cash and cash equivalents at quarter end totaled $15.8 million.

The following Production and Sales Statistics table summarizes certain information about our mining operations for the three and nine months ended September 30, 2017 and 2016: 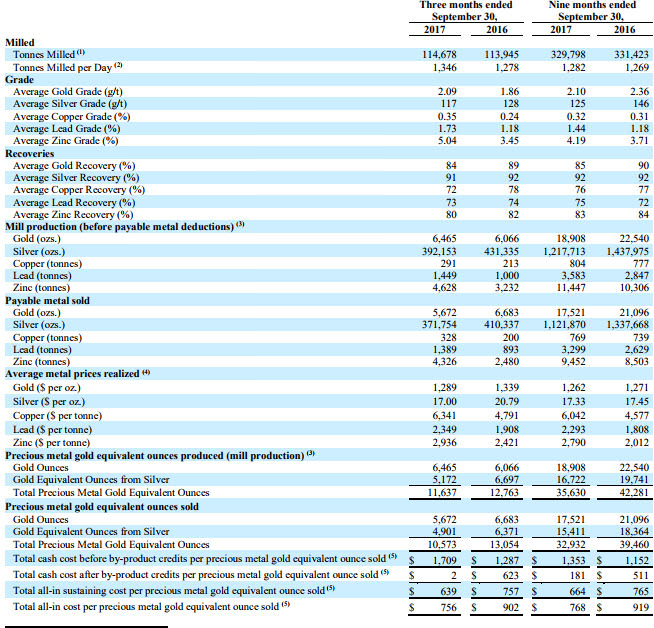 (1) For the third quarter of 2017 and 2016 and first nine months of 2017 and 2016, this includes 2,108, 11,459, 42,079, and 38,764 tonnes, respectively of open pit ore.
(2) Based on actual days the mill operated during the period.
(3) Mill production represents metal contained in concentrates produced at the mill, which is before payable metal deductions are levied by the buyer of our concentrates. Payable metal deduction quantities are defined in our contracts with the buyer of our concentrates and represent an estimate of metal contained in the concentrates which the buyer deducts from payment. There are inherent limitations and differences in the sampling method and assaying of estimated metal contained in concentrates that are shipped, and those contained metal estimates are derived from sampling methods and assaying throughout the mill production process. We monitor these differences to ensure that precious metal mill production quantities are materially correct.
(4) Average metal prices realized vary from the market metal prices due to final settlement adjustments from our provisional invoices when they are settled. Our average metal prices realized will therefore differ from the market average metal prices in most cases. (5) For a reconciliation of this non-GAAP measure to total mine cost of sales, which is the most comparable U.S. GAAP measure, please see NonGAAP Measures in the Company’s most recently filed 10-Q. 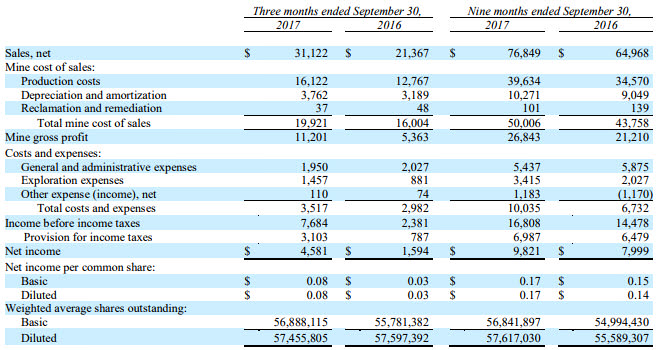 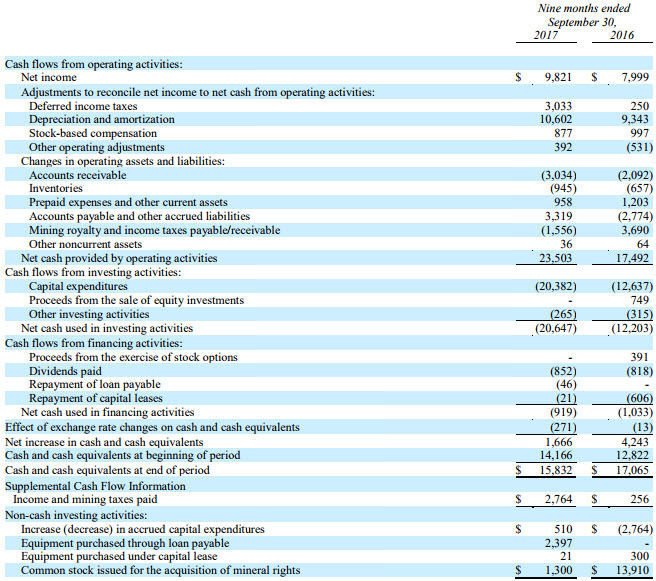 Gold Resource Corporation is a mining company focused on production and pursuing development of gold and silver projects that feature low operating costs and produce high returns on capital. The Company has 56,891,484 shares outstanding, zero warrants and has returned over $110 million back to its shareholders since commercial production commenced July 1, 2010. Gold Resource Corporation offers its shareholders the option to convert their cash dividends into physical gold and silver and take delivery. For more information, please visit GRC’s website, located at www.Goldresourcecorp.com and read the Company’s Form 10-K for an understanding of the risk factors involved.