The Alta Gracia property, which hosts the Mirador Mine, is located approximately 16 kilometers north west of the Company’s Aguila Project. The 2017 Alta Gracia surface drill campaign tested four primary vein structures which outcrop at the surface.

The 2017 Alta Gracia drill program intercepted multiple parallel high-grade gold and silver veins. The primary four vein structures were targeted for drilling because of the presence of numerous historic underground workings that previously exploited high-grade gold and silver. The 2017 drill targets were generated from previous drilling by the Company, as well as numerous chip sampling from underground workings. The data obtained from this year’s drill program will be used to generate new drill targets for follow up in 2018, with a goal of defining additional mineralization to support future mining operations in conjunction with the Mirador Mine.

Mr. Barry Devlin, Vice President of Exploration, stated, “Our 2017 drill campaign at Alta Gracia was a success on many levels. We continue to see elevated levels of gold and silver in multiple drill holes at Alta Gracia. Not only did our exploration efforts intercept all four targeted primary veins, but also discovered multiple new unnamed mineralized veins. We look forward to returning to Alta Gracia in 2018 with another drill program to build on our 2017 drill success.”

The Alta Gracia property is one of six potential high-grade gold and silver properties in the Company’s Oaxaca Mining Unit, which includes over 684 square kilometers in southern Mexico. The Mirador Mine is the Company’s second operating mine, which began production in mid- 2017. 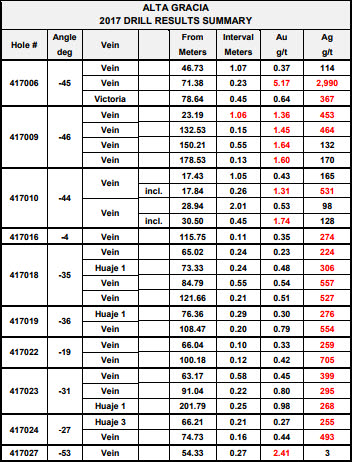 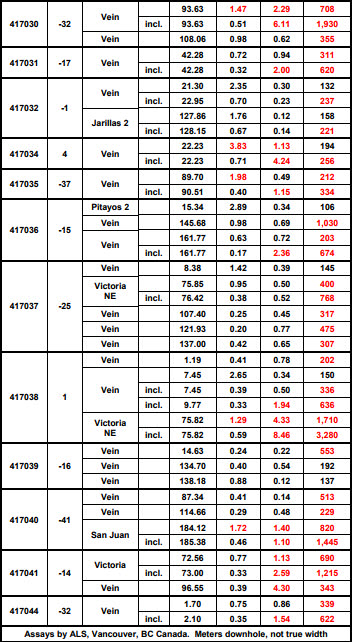 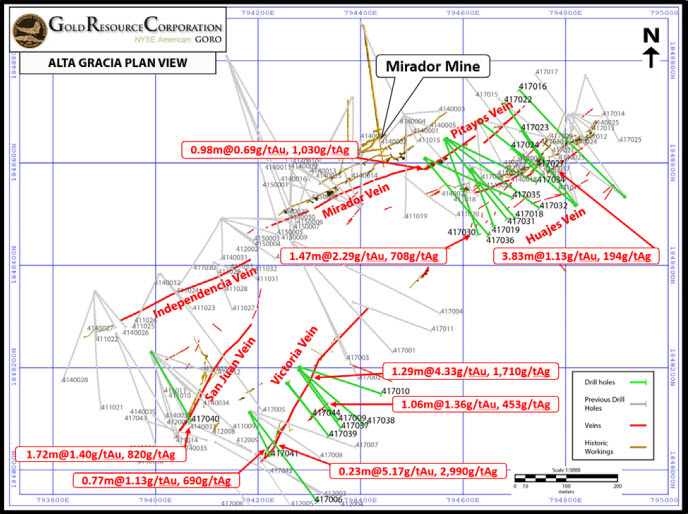 Gold Resource Corporation is a gold and silver producer, developer and explorer with operations in Oaxaca, Mexico and Nevada, USA. The Company has 56,891,484 shares outstanding, zero warrants and has returned $110 million back to shareholders since commercial production commenced July 1, 2010. Gold Resource Corporation offers shareholders the option to convert their cash dividends into physical gold and silver and take delivery. For more information, please visit GRC’s website, located at www.Goldresourcecorp.com and read the Company’s 10-K for an understanding of the risk factors involved.