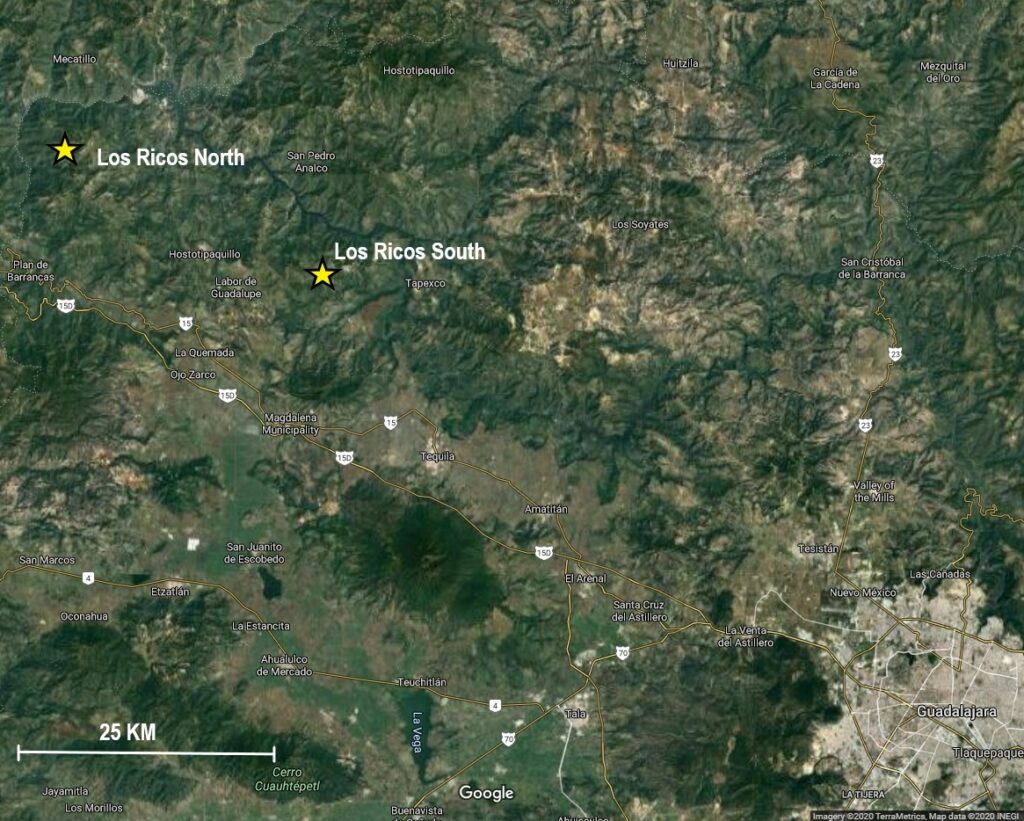 The PFS optimization test work program has been completed independently at SGS Laboratories located in Lakefield, Ontario, Canada on HQ core samples. The program was to further develop data for the project to enhance the previously reported Preliminary Economic Assessment (“PEA”) to a PFS level of report.

“Since acquiring the Los Ricos district in March 2019, we’ve focused on moving forward with the projects in three key areas.  The first area of focus has been resource definition and expansion through our drilling and exploration programs in the district.  The second area of focus has been on engineering and technical reports ultimately leading towards a construction decision.  The third area of focus has been on consolidation of mineral concessions within the district, expanding from the initial 29 to the current 44 concessions,” said Brad Langille, President and CEO.  “As outlined in this release, we are very pleased with the advancement of engineering towards the PFS in Los Ricos South, and the growth in resource ounces as defined in our last resource update.  Also, we cannot overlook the success of our consolidation efforts in the district of which potentially more strategic opportunities may present themselves.”

The objectives of the program were to develop comminution data to confirm the grindability characteristics of the ore as well as obtain metallurgical data to optimize the recovery of gold, silver, and the benefits of SART technology as it relates to cyanide regeneration and a saleable copper product. As described in the PEA, the regeneration of cyanide through the SART process will greatly reduce process operating cost. The metallurgical processes carried out were whole ore cyanide leaching, Merrill Crowe zinc precipitation, and SART copper sulfide production and cyanide recovery. The envisioned SART plant is similar to that currently in operation at the Company’s Parral project.

The results generated from the test program allowed for further development of the process design criteria, major equipment design and capital costing. The design included but was not limited to the associated crushing, milling (SAG, ball mill, and pebble crusher), leaching, thickening, and pre-leach and final tailings filtration. The work also allowed for development and submission of technical requirements for LRS permitting.

The following is an update on specific LRS PFS activities:

David J. Salari, P.Eng. of D.E.N.M Engineering Ltd is a Qualified Person as defined under National Instrument 43-101. Mr. Salari has reviewed and approved the scientific and technical information in this press release.

VRIFY is a platform being used by companies to communicate with investors using 360° virtual tours of remote mining assets, 3D models and interactive presentations. VRIFY can be accessed by website and with the VRIFY iOS and Android apps. Access the GoGold Company Profile on VRIFY at: https://vrify.com

The Los Ricos North Project was launched in March 2020 and includes drilling at the El Favor, La Trini, Mololoa, Casados and El Orito targets. The Company is expecting to release its initial resource estimate on the Project in late 2021, and has a drill program for an additional 100,000 metres of drilling for 2022 in place.

GoGold Resources (TSX: GGD) is a Canadian-based silver and gold producer focused on operating, developing, exploring and acquiring high quality projects in Mexico.  The Company operates the Parral Tailings mine in the state of Chihuahua and has the Los Ricos South and Los Ricos North exploration projects in the state of Jalisco. Headquartered in Halifax, NS, GoGold is building a portfolio of low cost, high margin projects. For more information visit gogoldresources.com.