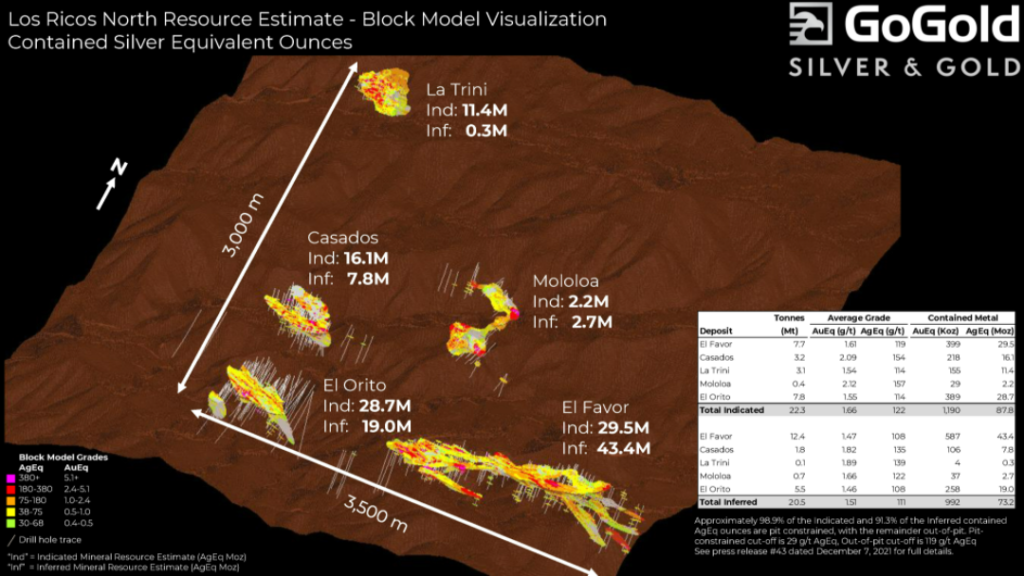 HALIFAX, NS, Jan. 19, 2022 /PRNewswire/ – GoGold Resources Inc. (TSX: GGD) (OTCQX: GLGDF) (“GoGold”, “the Company”) is pleased to release the results of 9 drill holes at El Favor East within Los Ricos North.  Hole LRGF-21-099 intersected 1.4m of 1,703 g/t silver equivalent (“AgEq”) contained within 28.3m of 189 g/t AgEq. See Table 1 for breakdown of silver and gold values. These drill holes represent data that is post resource cut-off date, will form part of a future resource update. The drill program at El Favor East is primarily focussed on expansion of the resources with up-dip and down-dip drilling in addition to strike expansion on the zone towards the east.

“The initial Resource Estimate which we released December 7, 2021 was a point in time and represented the results of the first 100,000 metres of drilling at Los Ricos North.  The additional post data cut-off drilling will contribute to a future Resource update in Los Ricos North,” said Brad Langille, President and CEO. “We have embarked on the next 100,000 metres of drilling which is primarily focused on continued resource expansion and look forward to many more excellent drilling results such as these at El Favor East.  We anticipate that in 2022 we will continue to grow the ounces in the Los Ricos district significantly as we did in 2021.”

The exploration team has been moving east of El Favor with drilling stepouts in the eastern end of El Favor, beginning with discovery hole 48, and continuing to intersect wide strong mineralization.  This area is known as the El Favor East zone, and a mapping and drilling program has extended the presence of mineralization 900m to the east of hole 48 (El Favor East zone discovery hole), as shown in Figure 2.  To date, approximately 800m of El Favor East has been drilled showing the strong mineralization.  The drill holes in this release were not included in the initial Mineral Resource Estimate for Los Ricos North released on December 7, 2021, hole LRGF-21-094 was the final drill hole included in that resource.

In September, the company commissioned TMC Exploracion to complete an IP survey using the Pole:Dipole array on the El Favor property. The grid consists of a network of 28 N/S profiles spaced every 100 m from L-2W to L-25E ranging in length from 0.85 to 2.0 km.  The survey outlined several high chargeability anomalies representative of the sulphide mineralization along the El Favor – El Favor East zone.  A geophysical map showing anomalies and drilling targets is included as Figure 3 below.

El Favor is located approximately 800 meters along strike to the east of the El Orito deposit.  The longitudinal section below shows that the combined systems cover approximately 2.9km in mineralized strike length over a 3.7km distance. At El Orito, wide zones of precious and base metal mineralization were cut by drill holes at El Orito at elevations between 600 to 900m.  The drill holes at El Favor have cut primarily silver-gold mineralization with trace to minor amounts of base metals at a higher elevation in the system, between 1,050m to 1,400m, compared to the semi-massive to massive base metal sulphide mineralization seen deeper in the El Orito deposit.

VRIFY Slide Deck and 3D Presentation
VRIFY is a platform being used by companies to communicate with investors using 360° virtual tours of remote mining assets, 3D models and interactive presentations. VRIFY can be accessed by website and with the VRIFY iOS and Android apps.

Procedure, Quality Assurance / Quality Control and Data Verification
The diamond drill core (HQ size) is geologically logged, photographed and marked for sampling. When the sample lengths are determined, the full core is sawn with a diamond blade core saw with one half of the core being bagged and tagged for assay. The remaining half portion is returned to the core trays for storage and/or for metallurgical test work.

About GoGold Resources
GoGold Resources (TSX: GGD) is a Canadian-based silver and gold producer focused on operating, developing, exploring and acquiring high quality projects in Mexico.  The Company operates the Parral Tailings mine in the state of Chihuahua and has the Los Ricos South and Los Ricos North exploration projects in the state of Jalisco. Headquartered in Halifax, NS, GoGold is building a portfolio of low cost, high margin projects. For more information visit gogoldresources.com.