(All amounts expressed in US dollars, unless otherwise stated)

Jorge A. Ganoza, President and CEO, commented, “Our results in the second quarter a reflect strong financial performance in spite of a challenging price environment for silver, with adjusted net earnings per share of 6 cents, adjusted EBITDA margin of 40 percent, and free cash flow from ongoing operations of $15.4 million.”  Mr. Ganoza continued, “As of the end of June, Lindero construction progress is 57 percent complete, with 98 percent of the direct capital expenditures committed, and over 70 percent of the total projected capital spent.” Mr. Ganoza added, “With mine production set to start in August and construction of the crushing and leach pad facilities progressing according to schedule we plan to initiate placing ore on the leach pad in the fourth quarter of 2019.” 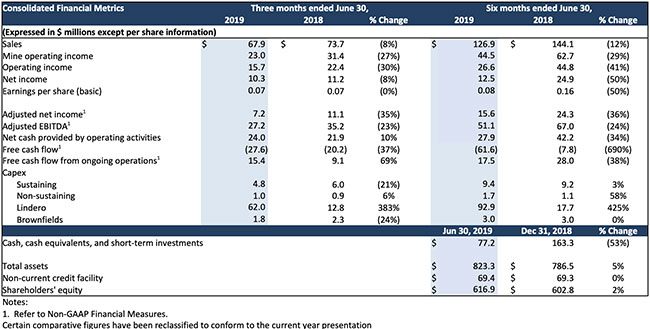 Operating income for the three months ended June 30, 2019 was $15.7 million, or $6.7 million lower than the $22.4 million reported for the comparable quarter in 2018.   The decrease in operating income was due primarily to lower sales of $5.8 million and higher operating costs of $2.7 million at both the San Jose and Caylloma mines, and was partially offset by lower selling and general and admistration expenses of $1.1 million related to lower share-based payment charges.  Cash cost for the quarter and year-to-date at San Jose and Caylloma are within our annual cash cost guidance range. (Refer to Fortuna news release dated January 17, 2019.  “Fortuna reports 2018 full year production of 12.8 million silver equivalent ounces and issues 2019 guidance”).

Adjusted net income for the quarter was $7.2 million a decrease of 35% compared to $11.1 million reported in the same quarter of 2018.   The main non-cash adjustments were unrealized commodity derivative losses, foreign exchange gains and deferred tax credits related to our Argentina construction activities.  The effective tax rate, on an adjusted basis was 54% compared to 52% for the same quarter in 2018 and reflects a withholding tax on dividend repatriation of $1.4 million.

Adjusted EBITDA for the period was $27.2 million compared to $35.2 million in the comparable period in 2018.  The decrease in adjusted EBITDA was due primarily to lower metal prices and higher operating costs.

Construction at the Lindero 18,750 tpd open pit heap leach gold project located in the Province of Salta in Argentina is 57% complete.  Approximately 98% of direct capital costs have been committed with all the major contractors at the construction site.  Construction spending is accelerating and spending for the second quarter was $51.2 million (YTD spending – $92.8 million), an increase of 23% over the first quarter.  Total project construction spending as at the end of June 30, 2019 was $216.2 million, of which approximately $31.5 million remains unpaid.  The budget construction forecast to completion of the project is approximately $298.0 million.  In addition we expect to incur approximately $25 million of pre-production costs and supplies inventory along with $18 million of refundable value added taxes. 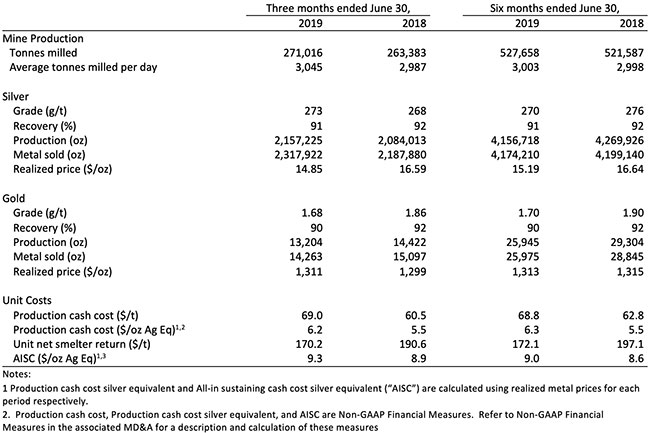 The San Jose Mine produced 2,157,225 ounces of silver and 13,204 ounces of gold in the second quarter of 2019, which were 4% above and 8% below the comparable quarter in 2018.  The higher silver production was due to a 2% higher head grade and a 3% higher mill throughput, while the lower gold production was due to a 10% lower head grade compared to the same quarter in 2018.

Cash cost per tonne of processed ore for the second quarter ended June 30, 2019 increased 14% to $68.99 per tonne (refer to Non-GAAP Financial Measures) compared to $60.47 per tonne for the comparable quarter in 2018.  The increase in cash cost was due to higher mining costs related to blasting and rock support and partially offset by lower dry-stack tailings operating costs.  Cash cost for the quarter and year-to-date are within our 2019 annual cash cost guidance of between $63.5 to $70.1 per tonne (refer to Fortuna news release dated January 17, 2019.  “Fortuna reports 2018 full year production of 12.8 million silver equivalent ounces and issues 2019 guidance”). 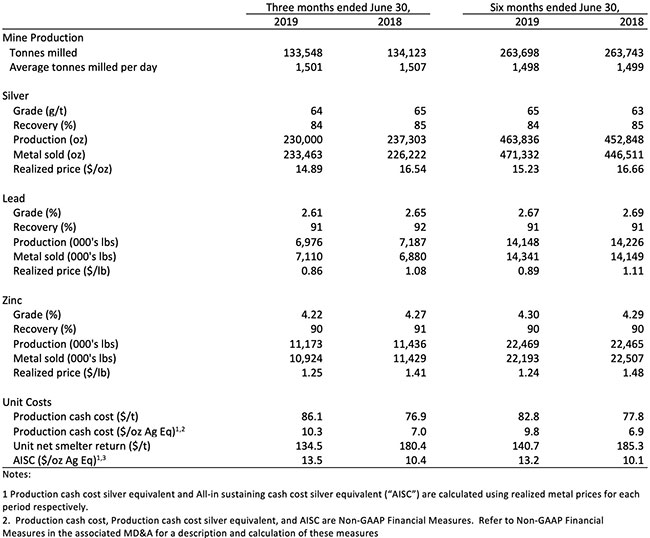 Cash cost per tonne of processed ore was $86.11 (refer to Non-GAAP Financial Measures) and was 12% higher than the $76.88 cash cost per tonne for the comparable period in 2018.  The higher cash cost was due primarily to higher mining costs related to preparation and support and higher on-site indirect costs.  Cash cost for the quarter and year-to-date are within our 2019 annual cash cost guidance of between $80.0 to $88.4 per tonne (refer to Fortuna news release dated January 17, 2019.  “Fortuna reports 2018 full year production of 12.8 million silver equivalent ounces and issues 2019 guidance”).

The following tables represent the calculation of certain Non-GAAP Financial Measures as referenced in this news release. 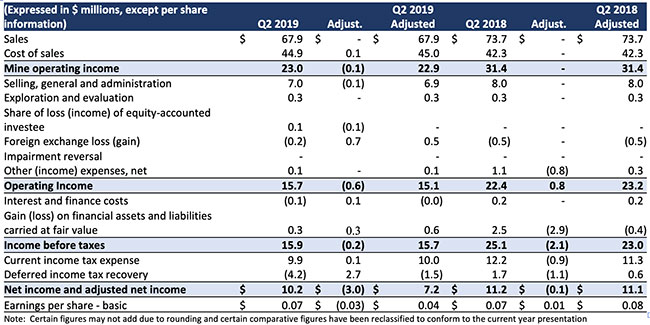 The financial statements and MD&A are available on SEDAR and have also been posted on the company’s website at https://www.fortunasilver.com/investors/financials/2019/.

A conference call to discuss the financial and operational results will be held on Thursday, August 8, 2019 at 9:00 a.m. Pacific | 12:00 p.m. Eastern.  Hosting the call will be Jorge A. Ganoza, President and CEO, and Luis D. Ganoza, Chief Financial Officer.

Shareholders, analysts, media and interested investors are invited to listen to the live conference call by logging onto the webcast at: https://www.webcaster4.com/Webcast/Page/1696/31124 or over the phone by dialing just prior to the starting time.

Fortuna is a growth oriented, precious metal producer with its primary assets being the Caylloma silver mine in southern Peru, the San Jose silver-gold mine in Mexico and the Lindero gold Project, currently under construction, in Argentina.  The Company is selectively pursuing acquisition opportunities throughout the Americas and in select other areas.  For more information, please visit its website at www.fortunasilver.com.

Forward looking Statements involve known and unknown risks, uncertainties and other factors which may cause the actual results, performance or achievements of the Company to be materially different from any results, performance or achievements expressed or implied by the Forward looking Statements. Such uncertainties and factors include, among others, changes in general economic conditions and financial markets; changes in prices for silver and other metals; technological and operational hazards in Fortuna’s mining and mine development activities; delays in the contruction at the Lindero Project, delays in the commissioning or commencement of commercial production at the Lindero Project; risks inherent in mineral exploration; uncertainties inherent in the estimation of mineral reserves, mineral resources, and metal recoveries; governmental and other approvals; political unrest or instability in countries where Fortuna is active; labor relations issues; as well as those factors discussed under “Risk Factors” in the Company’s Annual Information Form. Although the Company has attempted to identify important factors that could cause actual actions, events or results to differ materially from those described in Forward looking Statements, there may be other factors that cause actions, events or results to differ from those anticipated, estimated or intended.