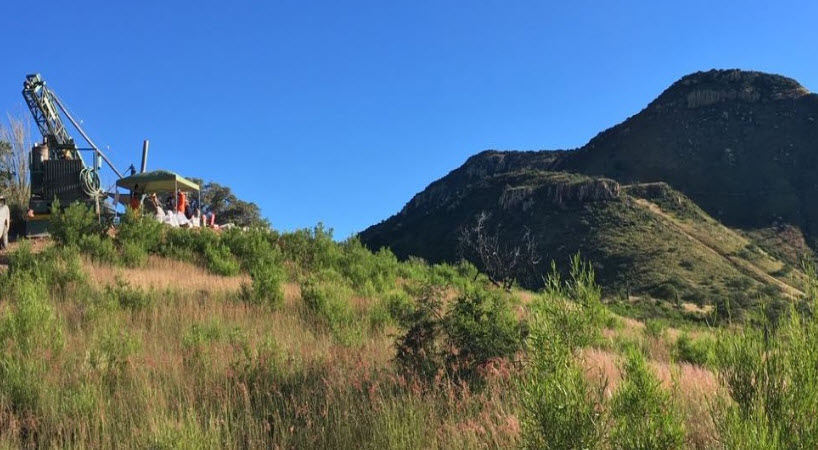 VANCOUVER, Canada, May 28, Sonoro Metals Corp., (TSXV: SMO | OTCQB: SMOFF | FRA: 23SP), (“Sonoro” and the “Company”), reports that drilling at Cerro Caliche continues to confirm and expand the gold and silver mineralization within the Central Zone and at several satellite zones previously identified by earlier drilling. Average gold grades of intervals reported are observed to be similar to existing heap leach mining operations in the region.

Highlights from the latest 20 holes of the Phase Two program reported here include:

“With almost 90% of the 10,000-meter drill program completed, we are pleased to report that the objectives of the technical program at Cerro Caliche have been accomplished,” said Kenneth MacLeod, President and CEO. “Most critically, the program continues to outline shallow low-grade bulk tonnage gold mineralized zones with gold grades and intervals similar to operating heap leach mines in the region.   We have conducted sufficient infill drilling at the Central Zones surrounding Japoneses and El Colorado to enable the commissioning of an NI-43-101 technical report and we have identified several highly-prospective mineralized zones within a 2 kilometer radius from the Central Zones, which will be drilled in future programs to confirm their economic potential.”

Two drill holes have defined gold mineralization to the west at the Guadalupe zone.  The most significant was SCR-061 which intercepted 15.24 meters with an average grade of 0.519 g/t Au beginning at 36.58 meters.  At the Espanola vein zone, one kilometer east of the Japoneses zone, drill hole SCR-068 tested the easternmost extent of Cerro Caliche’s known mineralization cutting multiple gold mineralized intervals of 3.05 meters with 6.131 g/t Au and 3.4 g/t Ag.  In the same drill hole are other intervals including 9.14 meters with 1.25 g/t Au and 5.4 g/t Ag.

To the south of the Japoneses zone, the Chinos Altos vein zone, which is notable for its pervasive mineralized stockworks, was tested by holes SCR-067 through SCR-071.  This large stockwork zone contains gold in a broad area of stockwork quartz veining and will be tested in more detail in later drilling campaigns.  These last four drill holes reported large zones of +0.1 g/t levels of gold mineralization.  SCR-067 reports intervals of 4.58 meters and 6.09 meters with respectively 0.258 g/t Au and 0.28 g/t Au beginning at 9.14 meters.  SCR-069 reports 7.62 meters from 28.96 to 36.58 meters of 0.947 g/t Au with 13.6 g/t Ag.  SCR-070 intercepted gold mineralization of 3.05 meters averaging 0.19 g/t Au, beginning at a depth of 18.29 meters.  SCR-071 reported an interval of 6.1 meters from 9.14 to 15.24 meters with an average of 0.44 g/t Au and 6.2 g/t Ag. Drill holes SCR-072, 073, and 075 through 080  are  located along the eastern edge of the Japoneses mineralized zone into Chinos NW, an area not previously recognized as having potential gold mineralization, but notable intercepts of stockwork mineralization were cut as exemplified in SCR-078 with 24.38 meters of 0.461 g/t AuEq.    Drill hole SCR-074 is angled southwest from the collar of SCR-075 cutting stockwork mineralization with the first 24 meters being mineralized; where part of that zone intercepted 15.24 meters averaging 0.337 g/t Au starting from a depth of 9.14 meters.  SCR-072 intersected 15.24 meters between 3.05 meters and 18.29 meters averaging 0.574 g/t Au and 3 g/t Ag.  These holes were drilled for more definition in preparation for future resource estimations.

The Phase Two drilling program is ongoing, and the company will report additional drill results when received and processed.  Together with the earlier drilling results announced in Sonoro’s news releases dated November 9, 2018; December 5, 2018; January 16, 2019; and April 28, 2019, the combined results from the drilling program confirm shallow, low grade, bulk tonnage, gold mineralized zones in supergene oxidized sedimentary and igneous rock units. Subject to metallurgical confirmation, the gold mineralized zones appear amenable to heap leach extraction of precious metals with deep oxidation.  This Phase Two drill program further expands the Cerro Caliche’s mineralized gold zones while showing continuity of grade and continuing to support the existence of a broadly mineralized low-sulphidation epithermal vein system with the potential to develop a large tonnage resource suitable for open pit mining.  The company notes that the average gold grades of intervals reported to date are similar to existing heap leach mining operations in the region.

A total of 4192.6 meters has been drilled and assayed to date in the Phase Two program, bringing the total drilled by Sonoro for the projected 10,000-meter program to 8796.4 meters.  The combination of historic and current exploration now totals more than 20,000 meters in 196 drill holes in addition to 6,000 surface samples.

All drill holes completed are RC type drill holes with 45 degrees inclination to either the southwest or northeast within vertical section planes with north 60 degrees east orientation. True drill intercept widths are considered near the reported drill widths ranging to 75% of drilled widths unless noted otherwise. Most vein zones have a north 30 west trends with 45 to 70 dips to the northeast.

Drill samples are collected with an airstream cyclone and passed into a splitter that divides each sample into quarters.  The quartered samples are then bagged and sealed with double identification. The sample group has blanks, standards and duplicates inserted into the sample stream.  ALS-Chemex collects the samples and transports them directly to the preparation laboratory in Hermosillo, Sonora.

At the laboratory, part of each sample is reduced through crushing, splitting and pulverization from which 200 grams is sent to the ALS-Chemex assay laboratory in Vancouver. Thirty grams undergoes fire assay for gold with the resulting concentrated button of material produced is dissolved in acids, and the gold is determined by atomic absorption.  Another quantity of the sample is dissolved in four acids for an ICP multi-element analysis.  Standards are also inserted into the groups for analyses by ALS-Chemex.

Cerro Caliche is located 45 kilometers east southeast of Magdalena de Kino in the Cucurpe-Sonora Mega-district of Sonora, Mexico. Multiple historic underground mines were developed in the concession including Cabeza Blanca, Los Cuervos, Japoneses, Las Abejas, Boluditos, El Colorado, Veta de Oro and Espanola. Mineralization types of the Cucurpe-Sonora Mega-district include variants of epithermal low sulfidation veins and related mineralized dikes and associated volcanic domes. Local altered felsic dikes cut the mineralized meta-sedimentary rock units and may be associated with mineralization both in the dikes and meta-sedimentary rocks. The Cucurpe-Sonora Mega-district has historically been regarded as vein dominated, but recently, open pit mining operations have been developed on disseminated and stockwork style gold mineralization.

Host rocks include Jurassic-Cretaceous meta-sedimentary rock units including argillite, shale, quartzite, limestone, quartz pebble conglomerate and andesite. Younger intrusive rock consisting of medium coarse-grained granodiorite-granite is present in the westerly parts of the concessions near the historic Cabeza Blanca mine. It is apparent that veining cuts and pervasively alters the intrusive stock.   Rhyolite occurs in irregular bodies distributed in higher elevations in the northerly part of the concession, including the Rincon area, where it occurs as flows, sills, dikes and rhyolite domes. Part of the rhyolite is mineralized and appears to be related to epithermal gold mineralization throughout the property.

Stephen Kenwood, P. Geo., a director of Sonoro, is a Qualified Person within the context of National Instrument 43-101 and has read and approved this news release. Readers are cautioned that the presence of mineralization on historic mines adjacent to or on Cerro Caliche is not necessarily indicative of gold mineralization in the concessions held by the company.

On behalf of the Board of SONORO METALS CORP.