Montreal, Quebec – (August 12, 2015) – Cyprium Mining Corporation ("Cyprium" or the "Company") (TSX-V: CUG and CUG.DB) is pleased to announce the results from its initial phase of exploration at the Potosi silver mine located in Santa Eulalia, Mexico. On July 28, 2015, the Company announced the signing of letter of intent to acquire a 53% controlling interest in a joint venture to be formed which will have the rights to explore and exploit the historic Potosi silver mine.

The underground exploration program consisted of thirty-four channel samples and had as its primary objective to audit past exploration results from over five hundred samples taken in 2014 on levels 9 and 10 of the mine by an independent third-party. The audit sampling included taking twenty-five duplicate samples of the 2014 program. Sampling in new areas was also conducted on levels 3 and 4 of the mine where initial pilot production is planned. Nine samples were taken in this area.

The sampling on levels 3 and 4 of the Potosi mine was completed in workings where initial pilot production is planned. Seven samples from level 4 yielded average values of 578 g/t Ag, 4.99% Pb and 2.8% Zn over an average sample width of 1.65 meters, and two samples from level 3 yielded averages of 100 g/t Ag, 2.79% Pb and 8.43% Zn over 1.45 meters. The sampling was widely spaced and more systematic sampling will be needed to determine the expected grades of the pilot mining program. A more detailed description of this work is the subject of the NI 43-101 report currently in preparation.

Mr. Alain Lambert, Chairman and C.E.O. of Cyprium stated: "The results of this initial phase of exploration are consistent with expectations. These results will help our technical team design a more comprehensive exploration program which we will undertake immediately following the closing of the joint venture announced in July. In the meantime, we are continuing negotiations with various contractors regarding the rehabilitation of shaft #3 and #5 as well the mining of level 2 to 4 and 9 & 10. Our priority in these negotiations is to ensure that as much of our costs as possible are on a variable basis and that our capital expenditures in the short-term are focused on production. While we believe in a healthy exploration budget, we remain committed to our stated goal of financing such exploration in great part from successful and profitable production."

The samples were placed in labeled bags secured with plastic tie strips and were delivered directly to the analytical facility for analysis, ALS Chemex de Mexico, located in Chihuahua City, Mexico. The samples were weighed, identified and photographed prior to sample preparation. All samples were analyzed in Vancouver by the ME-MS41 method for 51 elements, and over limits for Ag, Pb and Zn were reanalyzed by the Me-OG62 method when Ag is greater than 100g/t and Pb or Zn are greater than 1%. ALS Chemex is an internationally recognized analytical laboratory.

Results from level 3 and 4: 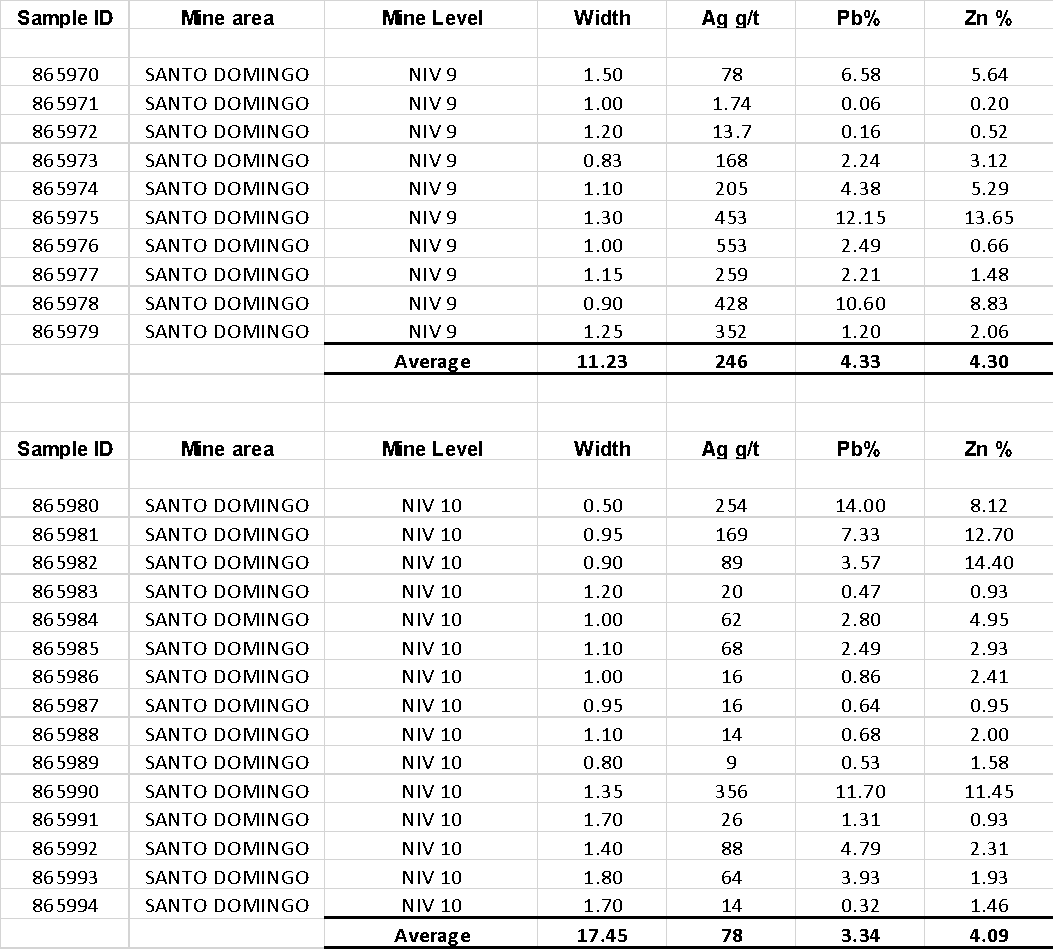 Santa Eulalia is a world class polymetallic mining district located in the central part of the State of Chihuahua, Mexico, approximately twenty-two kilometers east of the City of Chihuahua. Mineralization in the area was originally discovered during the Spanish colonial period in the 1500's, and recorded production has occurred over more than 300 years. Santa Eulalia ranks as one of Mexico's primary silver and base metal producing districts with nearly 450 million ounces of silver and substantial amounts of lead and zinc mined. The nature of the deposit in the Santa Eulalia district is a carbonate replacement deposit and is the historically largest of its type in Mexico. Mineralization occurs in an area about 10 km in length and 5 km in width. Production and reserves for the district have been estimated to be about 50 million metric tons(1) with grades of 125-350 g/t Ag, 2-8% Pb and 3-12% Zn(1) (2), along with appreciable quantities of tin and vanadium.

The Santa Eulalia district covers approximately forty-eight square kilometers and is divided into three areas, the West Camp, the Central Camp and the East Camp. The Potosi silver mine is located in the West Camp. The West Camp has produced most of the minerals from the district from an area 4 km long in a north-south direction and 2 km wide in an east-west direction, with the Potosi silver mine being one of the primary producers.

Mineralization in the Santa Eulalia district is characterized by massive sulfides, dominantly pyrrhotite, sphalerite, galena and pyrite that are hosted mainly in horizontal mantos and steep chimneys of sulfide material that replace limestone, with some breccia bodies also occurring. Mineralized bodies occur along laterally continuous discrete structural zones that mainly trend in a north-south orientation, with mineralization forming preferentially in certain stratigraphic units. Past mining has reached to as much as 700 meters depth below the surface on 21 levels. Production in the West camp was diminished until the late 80's with the discovery of new mineralization. Currently there is little production in the district.

Cyprium has engaged Dr. Craig Gibson to complete a National Instrument 43-101 report with respect to the initial mine levels 2, 3 and 4 of the Potosi silver mine. It is expected the report will take two months to complete. The report to be prepared by Dr. Gibson shall not contain a resource or reserve calculation.

Cyprium looks for projects located in Northern Mexico that have a potential for profitable production in the short-term and a large exploration potential. Cyprium is committed to maximizing the potential of projects by funding exploration programs mainly through cash flows generated by production instead of funding such programs strictly through equity offering thus limiting shareholder dilution. Cyprium prioritizes projects which are easily accessible and close to large urban centers.

Cyprium also has the exclusive use of a 100 metric tons per day flotation plant located twenty kilometers outside the City of Chihuahua in Northern Mexico (the "Aldama Plant"). Cyprium has the exclusive use of the Aldama Plant under a five year agreement with its owner during which Cyprium will use the Aldama Plant on a variable cost basis. Cyprium will purchase mill feed for its own account and will be responsible for the supervision of all metallurgic processes, including quantitative chemical analysis, assaying of samples, determining feed grades and the sale of concentrates (see October 1st, 2014 news release). Cyprium recently announced its plans to double the capacity of the Aldama plant before the end of 2015.

Cyprium also owns 51% of Coyame Copper SA de CV ("Coyame Copper"), a Chihuahua, Mexico based mining exploration company and has an option to increase its stake in Coyame Copper to 70% for a consideration of US$1.2 million payable over a period of eighteen months following the exercise of the option. Coyame Copper's Las Cristinas Project consist of four adjacent exploration concessions (Las Cristinas, La Parrita, La Verde and La Lagrimosa) covering 684 hectares.

Qualified Person: Dr. Craig Gibson, Certified Professional Geologist, prepared the summary of public historical information on the Santa Eulalia district, and has reviewed the appropriate portions of this news release and approved the contents thereof. Public information included in this release are based on work by from a PhD dissertation by Peter K. M. Megaw and information from the Mexican Geologcial Survey (Servicio Geologico Mexicano).

This news release contains "forward-looking information" (within the meaning of applicable Canadian securities laws) and "forward -looking statements" (within the meaning of the U.S. Private Securities Litigation Reform Act of 1995). Such statements or information are identified with words such as "anticipate", "believe", "expect", "plan", "intend", "potential", "estimate", "propose", "project", "outlook", "foresee" or similar words suggesting future outcomes or statements regarding an outlook. Such statements include, among others, those concerning the Company's anticipated plans for developments of the Company and its mining projects".

Such forward-looking information or statements are based on a number of risks, uncertainties and assumptions which may cause actual results or other expectations to differ materially from those anticipated and which may prove to be incorrect. Assumptions have been made regarding, among other things, management's expectations regarding future growth, plans for and completion of projects by Company's third party relationships, availability of capital, and the necessity to incur capital and other expenditures. Actual results could differ materially due to a number of factors, including, without limitation, operational risks in the completion of Company's anticipated projects, delays or changes in plans with respect to the development of Company's anticipated projects by Company's third party relationships, risks affecting the ability to develop projects, risks inherent in operating in foreign jurisdictions, the ability to attract key personnel, and the inability to raise additional capital. No assurances can be given that the efforts by the Company will be successful. Additional assumptions and risks are set out in detail in the Company's MD&A, available on SEDAR at www.sedar.com.