Third quarter 2018 production and sales highlights for each of Coeur’s operations are provided below. 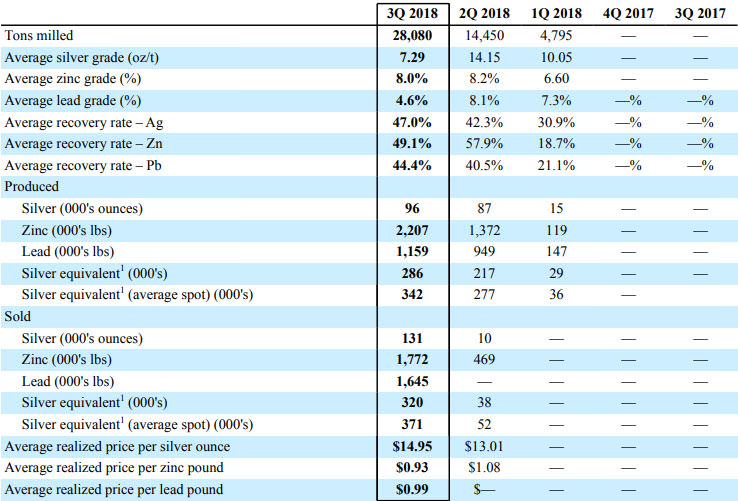 Coeur’s 2018 production guidance was revised on September 4, 2018 to reflect improved visibility of Silvertip’s production following the commencement of commercial production as well as stronger than expected performance at Rochester during the first half of the year.

Coeur will report its third quarter 2018 financial results on October 31, 2018 after the New York Stock Exchange closes for trading. There will be a conference call on November 1, 2018 at 11:00 a.m. Eastern Time.

The Company anticipates reporting its fourth quarter 2018 financial results on February 13, 2019 after the New York Stock Exchange closes for trading and holding a conference call on February 14, 2019 at 11:00 am Eastern Time.

Coeur Mining, Inc. is a well-diversified, growing precious metals producer with five mines in North America. Coeur produces from its wholly-owned operations: the Palmarejo silver-gold complex in Mexico, the Silvertip silver-zinc-lead mine in British Columbia, the Rochester silver-gold mine in Nevada, the Wharf gold mine in South Dakota, and the Kensington gold mine in Alaska. In addition, the Company has interests in several precious metals exploration projects throughout North America.

This news release contains forward-looking statements within the meaning of securities legislation in the United States and Canada, including statements regarding anticipated production, grades, mining rates, crushing rates, development efforts, operations at Rochester and Silvertip, gold sales under Palmarejo’s gold stream agreement and timing of filing a technical report and obtaining permit amendment approval for Silvertip. Such forward-looking statements involve known and unknown risks, uncertainties and other factors which may cause Coeur’s actual results, performance or achievements to be materially different from any future results, performance or achievements expressed or implied by the forward-looking statements. Such factors include, among others, the risk that anticipated production levels are not attained, the risks and hazards inherent in the mining business (including risks inherent in developing large-scale mining projects, environmental hazards, industrial accidents, weather or geologically related conditions), changes in the market prices of gold, silver, zinc, and lead and a sustained lower price environment, the uncertainties inherent in Coeur’s production, exploratory and developmental activities, including risks relating to permitting and regulatory delays, ground conditions, grade variability, any future labor disputes or work stoppages, the uncertainties inherent in the estimation of gold and silver reserves, changes that could result from Coeur’s future acquisition of new mining properties or businesses, the loss of any third-party smelter to which Coeur markets its production, the effects of environmental and other governmental regulations, the risks inherent in the ownership or operation of or investment in mining properties or businesses in foreign countries, Coeur’s ability to raise additional financing necessary to conduct its business, make payments or refinance its debt, as well as other uncertainties and risk factors set out in filings made from time to time with the United States Securities and Exchange Commission, and the Canadian securities regulators, including, without limitation, Coeur’s most recent reports on Form 10-K and Form 10-Q. Actual results, developments and timetables could vary significantly from the estimates presented. Readers are cautioned not to put undue reliance on forward-looking statements. Coeur disclaims any intent or obligation to update publicly such forwardlooking statements, whether as a result of new information, future events or otherwise. Additionally, Coeur undertakes no obligation to comment on analyses, expectations or statements made by third parties in respect of Coeur, its financial or operating results or its securities.

Christopher Pascoe, Coeur’s Director, Technical Services and a qualified person under Canadian National Instrument 43-101, approved the scientific and technical information concerning Coeur’s mineral projects in this news release. For a description of the key assumptions, parameters and methods used to estimate mineral reserves and resources, as well as data verification procedures and a general discussion of the extent to which the estimates may be affected by any known environmental, permitting, legal, title, taxation, socio-political, marketing or other relevant factors, Canadian investors should refer to the Technical Reports for each of Coeur’s properties as filed on SEDAR at sedar.com.