The Feasibility Study has commenced

Cash balance at 31 December 2018 was approximately A$3.4 million

Based upon metals prices of the date of the Mineral Resource Estimate (MRE), the project is expected to generate a total positive EBITDA of A$237 million and an NPV8 of A$112 million, with an Internal Rate of Return of 76% and a payback period of 16 months.

Low operating and capital costs, high-value concentrates, strong operating cashflows and, most importantly, a C1 cash cost (per pound of payable zinc production, net of by product credits) in the lowest quartile of world zinc producers, all support the positive project economics.

The Study demonstrated that the optimal mining rate will be approximately 500,000tpa from a combination of open pit and underground mining operations, at Life of Mine (LOM) average grades of 4.6% Zn, 2.6% Pb and 15.9g/t Ag, delivering an initial mine life of 5.3 years.

The resources in the mining plan are summarised in Table 1:

Table 1: Oposura resources in the mining plan – by mining method

The Study identified that approximately 95% (by contained metal) of the zinc and lead mineralisation to be mined in the first year is classified in the JORC Indicated Mineral Resource category. This ensures that almost all of the payback period of 16 months is achieved by mining Indicated Resources.

From the first month of the mining schedule, high-grade mineralisation will be exploited from low strip ratio open pits. It is expected that minimal pre-stripping of the open pits will be required due to the presence of significant quantities of near-surface mineralisation.

The Study demonstrated both high metal recoveries and clean, commercial-grade concentrates with:

The time frame to commencement of production is estimated to be a minimum of two years as follows:

Pre-Feasibility Study to be completed by mid-2019

Definitive Feasibility Study to be completed by end of 2019

Project Approvals to be completed in first quarter of 2020

Construction to be completed by the end of 2020

* Totals may not add exactly due to rounding

A summary of operating cost estimates for Oposura is as follows in Table 3:

* Totals may not add exactly due to rounding

Revenue and cash flow forecasts have been developed using commodity prices prevalent at the time of, and used for, the MRE (dated 4 July, 2018), and are shown in Tables 4 and 5. 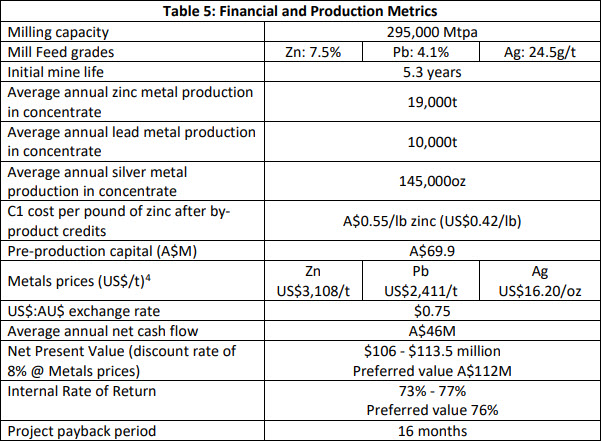 Work to support the Feasibility Study (FS) has commenced and currently includes:

The primary objectives of the drilling undertaken during the December quarter were:

Resource definition drilling defined two mineralised zones at Oposura – the East and West Zones (refer ASX announcement dated 4 July 2018). Infill drilling is being undertaken within the East Zone to upgrade certain areas of the Mineral Resource from JORC Inferred classification to JORC Indicated classification. This will enable most of the East Zone resources to be converted to JORC Probable Reserves as part of the Feasibility Study and further de-risk what the Scoping Study (refer ASX announcement dated 15 October 2018) has already identified as a financially robust, high-margin project.

Highlights of the East Zone Mineral Resource infill drilling include:

The resource extensional drilling was successful in delineating a zone of very high-grade (+20% Zn+Pb) zinc-rich mineralisation located around Tunnel D (refer Figures 2 & 3) within the western part of the East Zone Mineral Resource and extending further to the west into the Central Zone.

Highlights of the resource extensional drilling include:

Azure is currently assessing the potential for early development of this mineralisation.

Teck is currently earning back into the project and is the project operator. Work conducted during 2017 and 2018 represent the first two years of activity in a total four-year program comprising the first Option which will entitle Teck to earn back a 51% share of the project by sole-funding US$10 million of exploration expenditure, and making cash payments to Azure totalling US$500,000.

Upon reaching an initial 51% interest in the project, Teck may exercise the second Option to further increase its interest to 65% by sole funding an additional US$5 million in expenditures over a further two years, and making cash payments to Azure totalling an additional US$1.5 million. In this case, Azure will retain a contributing 35% interest in the Alacrán project. Grupo Mexico retains a 2% NSR royalty.

Sixteen of Teck’s holes targeted the Cerro Alacrán prospect where porphyry-style copper mineralisation lies beneath a blanket of copper oxides and chalcocite (an acid-soluble copper sulphide mineral) which was previously drilled by the Mexican Geological Survey in the 1970s and by Grupo Mexico in the 1990s.

Logging and sampling of the drill core is nearing completion and Teck will release final assay results to Azure when its QA/QC process of the geochemical data has been completed. 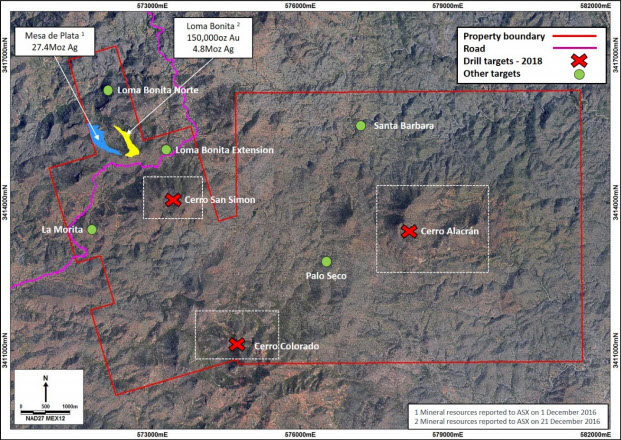 Quartz veins are exposed over lengths of up to 800m and reconnaissance sampling of veins, selvages and dumps by Azure returned many high grades of silver (up to 2,680g/t Ag) and gold (up to 100.5g/t Au) (refer ASX announcement dated 5 September 2018).

Sampling undertaken in the recent quarter from newly identified outcropping veins also returned strong grades of silver (up to 1,935g/t Ag) and gold (up to 17.55g/t Au), (see Table 6 and Figures 3 – 6). 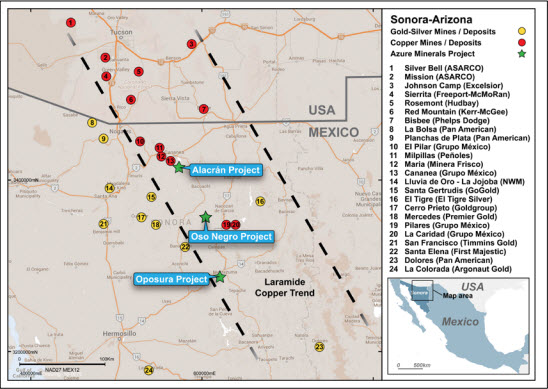 Reconnaissance exploration to identify additional prospective mineralised zones is continuing. A trenching program is being planned and the environmental permitting process is underway. 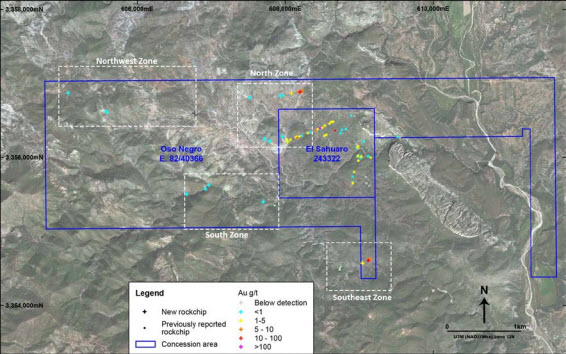 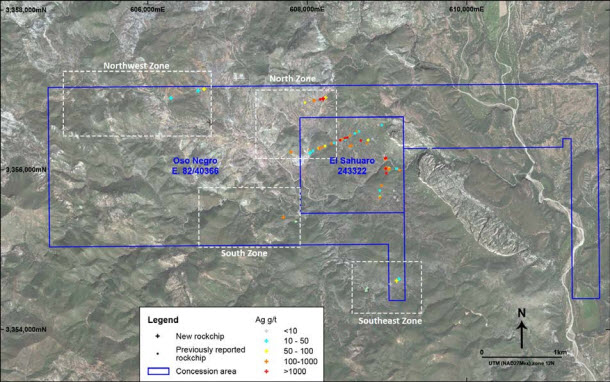 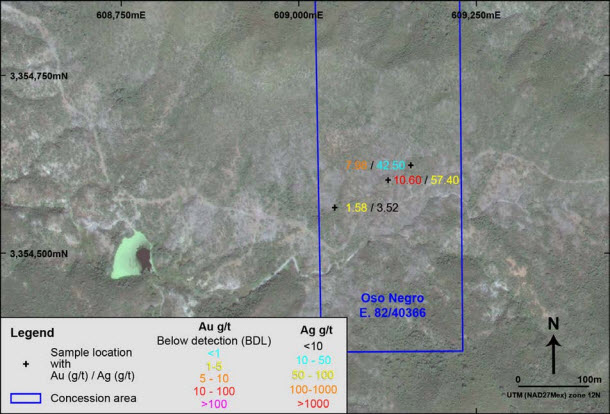 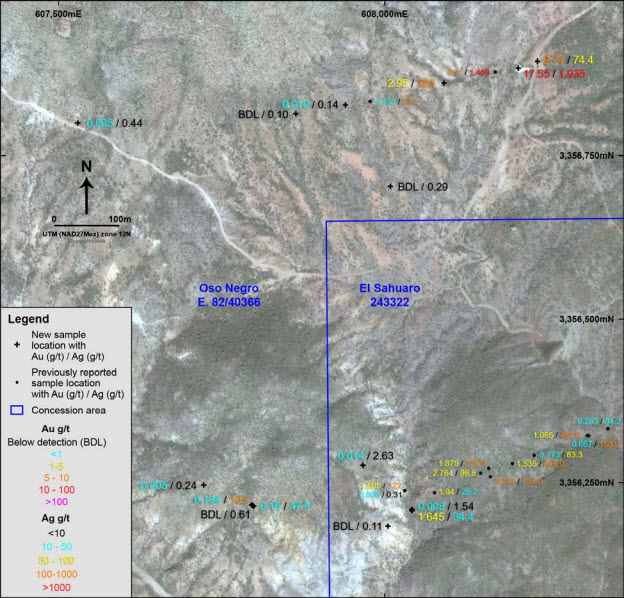 During the quarter the Company hosted site visits and inspections of the drill core by companies investigating the potential purchase or joint venture of this property.

No work undertaken. Azure continues to seek a partner for further exploration on this project.