Throughout 2017, Azure has had the clear focus to acquire the right project for the right deal and more than 70 projects were reviewed as part of this process. The Oposura acquisition delivers on this strategic approach and provides the Company with the high-quality, flagship project that it sought. Azure is a now a company with a diversified portfolio of highly prospective projects.

Azure executed an agreement on 11th August 2017 to acquire immediate 100% ownership of the Oposura Project by paying US$1,500,000 to the vendor Grupo Minero Puma (“Puma”). A Net Smelter Return royalty of 2.5% on future production is payable to the vendors. There are no back-in, earn-back or other rights relating to the Oposura Project.

During the quarter, Azure announced assay results from a diamond drilling campaign conducted by Puma immediately prior to the acquisition. This 16-hole drilling program intersected high grades of zinc, lead and silver from near surface in most holes (see Table 1 and refer ASX announcement dated 4 September 2017). 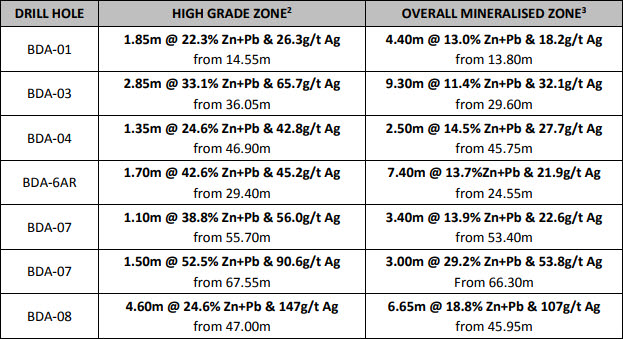 Azure has commenced a resource drill-out campaign with two drill rigs currently operating, and results will be used to complete a JORC mineral resource estimate by the end of the March quarter 2018.

The first phase of the drilling campaign will cover the area of known mineralisation as identified by historical exploration. It is anticipated that this resource drill-out will comprise about 120 holes on a 50m x 50m drill spacing, totalling approximately 7,000m.

Additional drilling will be undertaken to explore potential extensions and repetitions of the mineralised zone to the north and in the down-faulted block to the west.

Based upon historical reports, the Company has announced an Exploration Target of:

*This Exploration Target (refer ASX announcement of 18 September 2017) is conceptual in nature, but is based on reasonable grounds and assumptions. There has been insufficient exploration to estimate a Mineral Resource and it is uncertain if further exploration will result in the estimation of a Mineral Resource.

Development studies, including metallurgical testwork, mine design, hydrological and environmental studies, have commenced and are being conducted in parallel with the resource drill-out.

Azure further broadened and strengthened its Mexican portfolio during the September quarter, with the purchase of the high-grade Sara Alicia gold-cobalt project.

Cobalt deposits are virtually unknown in Mexico and identifying and acquiring Sara Alicia demonstrates the ability of the Company’s exploration team to recognise investment-grade opportunities.

Azure purchased 100% ownership by making a payment of US$125,000 to the previous owners, a local Mexican family who held title to the Sara Alicia mineral concession since the 1930’s. A further and final payment of $US125,000 will be made to the family upon the project achieving commercial production. No royalties are payable over future mineral production and there are no back-in, earn-back or other rights attached to the deal.

Historically, Sara Alicia was a small-scale producer of gold and cobalt in the 1930s from an underground mining operation. No production records are available, however historical plans and reports indicate that the mine was operated on six levels to a depth of approximately 60m below surface.

The Sara Alicia prospect hosts a sequence of carbonate rocks which have been intruded by a granodiorite porphyry. This intrusive event caused alteration and mineralising reactions in the limestones forming skarns, with precious and base metal mineralisation introduced into several separate horizons (or mantos) within the limestone sequence. One manto hosts the gold-cobalt mineralisation, while two and possibly more mantos contain copper-zinc-silver mineralisation.

Azure carried out sampling of outcrops, mine dumps and old mine workings, with many significant assay results being returned (refer ASX announcement of 23 August 2017), including:

Azure’s maiden drilling program at Sara Alicia has commenced with five diamond core holes planned for 450m. Drilling is targeting the areas around the old mine workings and outcrops which contain the highgrade gold and cobalt mineralisation detailed in Table 2.

No significant work undertaken. Azure is seeking a partner to continue exploration of this project.

Oposura and Sara Alicia were the stand-out opportunities identified during the Company’s project review process, as they are both high quality projects offering significant exploration upside and near-term development potential. As a result, during the quarter Azure achieved its strategic development objective (announced earlier this year) of acquiring advanced stage, precious metal and/or base metal projects with potential for near-surface, high grade mineralisation.

At the end of the September Quarter, Azure had approximately $5.9 million in cash.