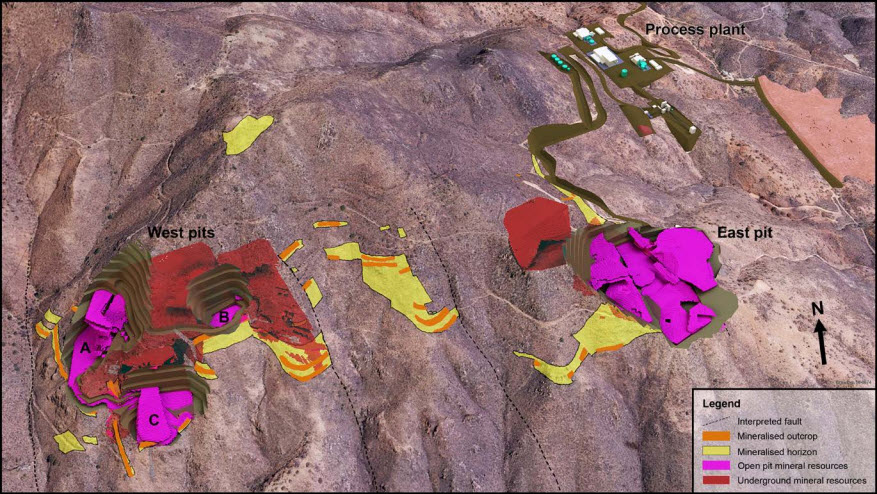 Azure Minerals Limited (ASX: AZS) (“Azure” or “the Company”) is pleased to report that the Scoping Study / Preliminary Economic Assessment (“PEA”) for its 100%-owned Oposura zinc-lead-silver project (“Oposura”) is progressing well and remains on track to be reported in the third quarter of 2018.

Key components of the PEA that have been completed to date include:

The mining study has identified that low unit cost open pit and room and pillar underground extraction methods are applicable for the Oposura deposit.

Mine scheduling demonstrates that minimal mining capital will be required ahead of the development of the open pits and underground stopes.

The mining study comprising both open pit and underground mine design and sequencing has been undertaken by global mining consultancy CSA Global Pty Ltd in Perth, Western Australia.

When factoring in topography, together with grade and width characteristics of the mineralised zones, the mining study demonstrates that resource extraction and project economics are optimal with a single open pit on the East Zone and three open pits on the West Zone, followed by underground mining of both deposits.

The mining study indicates that high-grade mineralisation will be accessed in the first month of the open pit mining schedule from low strip ratio pits in both the East and West Zones. It is expected that minimal capital expenditure will be required for pre-stripping of the open pits due to the presence of significant quantities of near-surface mineralisation.

Mining from the East and West Zone pit shells has been sequenced in stages to enhance project cashflow. The geometry of the topography above each deposit is conducive to low strip ratios and the early stages of each of the optimum pit shells involve very low strip ratios to access high-grade mineralisation. Open pit stages for East Zone are shown in Figure 3 and for West Zone in Figures 4 and 5, along with their respective underground room and pillar stope designs.

Considering the flat-lying nature of the mineralisation, underground stoping is proposed to be carried out by the room and pillar mining method utilising mechanised drilling, loading and haulage equipment. When implemented, the room and pillar method will result in the creation of multiple mining faces across the West Zone and East Zone deposits, providing opportunities for concurrent exploitation. This, combined with the four open pits, provides exceptional optionality, scheduling flexibility and risk reduction for the proposed mining operation.

For underground mining, low in-situ rock stresses are expected due to the average depth of the resource being only approximately 70 metres below surface, with a maximum depth below surface of 140m. The average height of the designed stopes is approximately 5.0m, with a minimum mining height of 2.0m. Stoping blocks have been designed on a 10m by 10m pattern with 4m by 4m pillars. Final stope recovery is designed to be greater than 95% (recovery is currently 100% for rooms, 90% for pillars) with pillar recovery scheduled as the final mining phase. No filling will be required with the designed room and pillar stoping method. 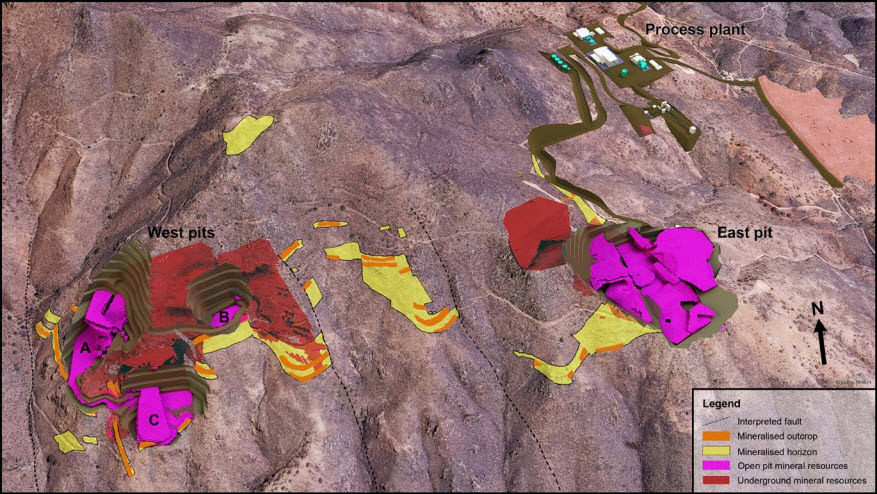 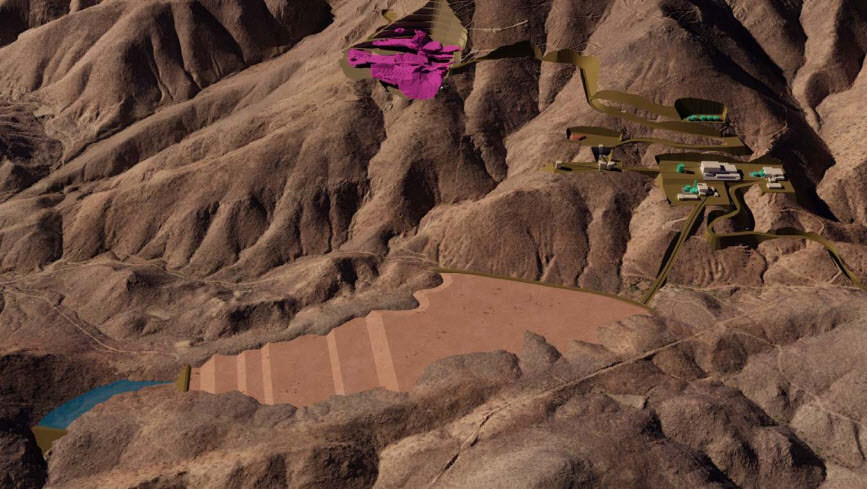 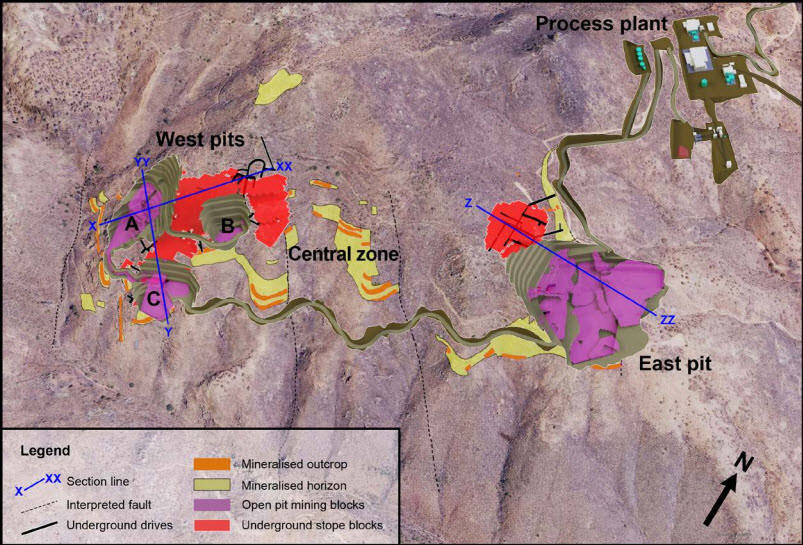 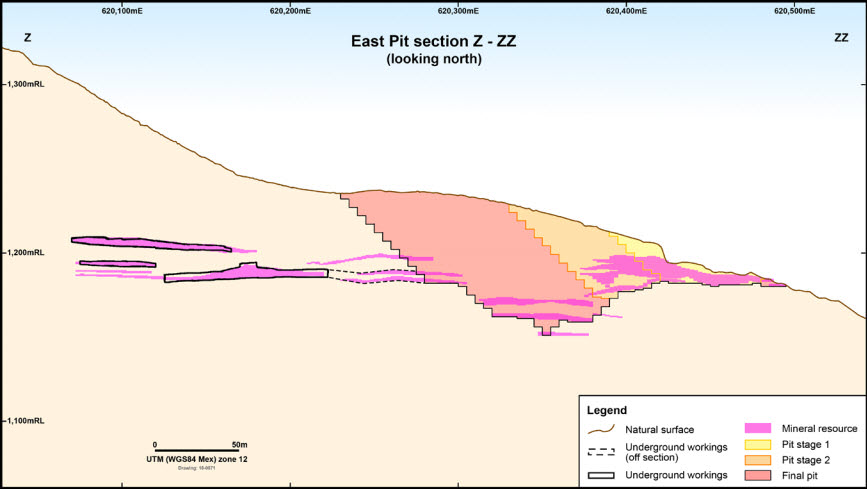 Pit wall angles are “apparent angles” due to the oblique alignment of the section line. Final overall pit wall angles have been modelled as 45°.
Figure 5: Section X-XX through West Zone: Optimum open pit shell (Pit A) with proposed pit stages and underground room and pillar stopes 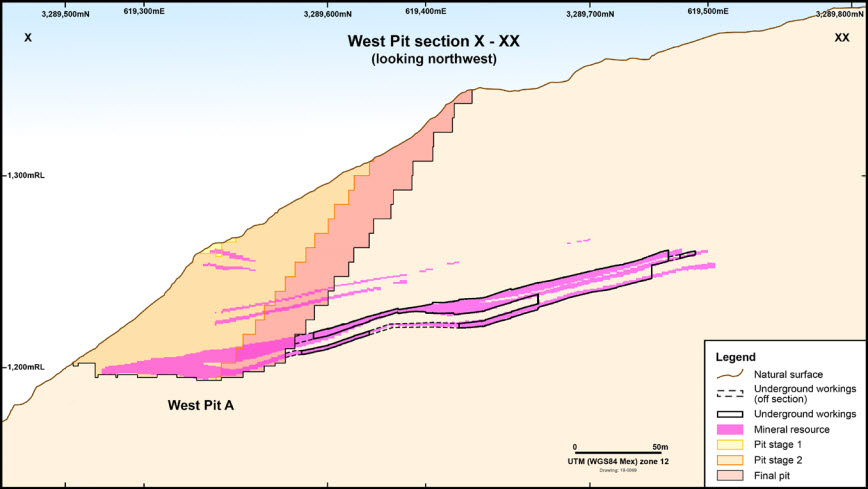 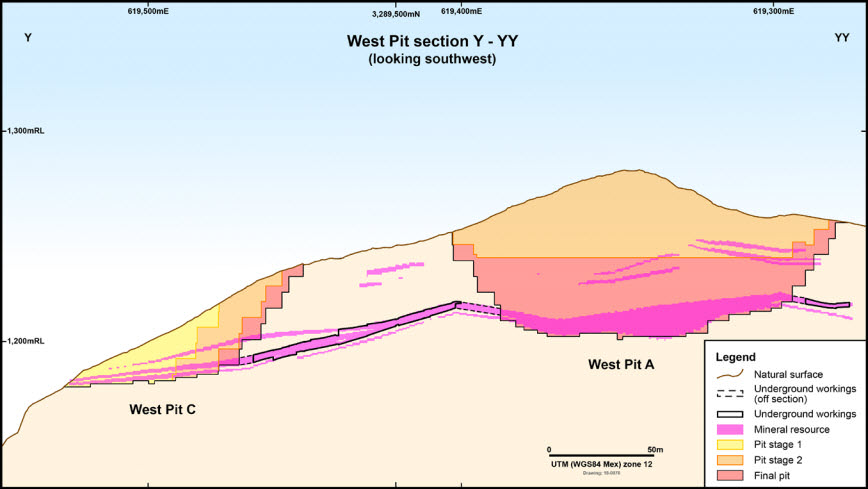 Pit wall angles are “apparent angles” due to the oblique alignment of the section line. Final overall pit wall angles have been modelled as 45°.
-ENDS-
For enquiries, please contact:
Competent Person Statements:
The information in this report that relates to Mineral Resources for the Oposura deposit is extracted from the report “Oposura Mineral Resource” created and released to the ASX on 4 July 2018 and is available to view on www.asx.com.au
The Company confirms that it is not aware of any new information or data that materially affects the information included in the original market announcements and that all material assumptions and technical parameters underpinning the estimates in the relevant market announcements continue to apply and have not materially changed. The Company confirms that the form and context in which the Competent Person’s findings are presented have not been materially modified from the original market announcements.
Original Article: http://azureminerals.com.au/wp-content/uploads/2018/08/180820.pdf