VANCOUVER, British Columbia, Sept. 27, 2018 (GLOBE NEWSWIRE) — Azucar Minerals Ltd. (“Azucar” or the “Company”) (TSX-V: AMZ; OTCQX: AXDDF) is pleased to announce results from its ongoing drilling program at the El Cobre porphyry copper-gold project in Veracruz State, Mexico. Drilling is currently underway at the Norte Zone and at the very north end of the Villa Rica target which is located south of the Norte Zone. Results received to date from the ongoing drilling program include the following highlights:

An extensive geologic review of drill and exploration data has resulted in several key interpretations including the following:

Step out and infill drilling at Norte has been modified based on these observations. At Norte, several potential high grade zones have been mapped in past drilling, and current drilling is now underway to intersect these zones at depth with holes also planned to define the limits of mineralisation along the new trend identified. The Company anticipates drilling to be underway with one or more rigs throughout the course of 2018 to test all targets currently defined.

J. Duane Poliquin, Chairman of Azucar commented, “We are very excited to commence what we anticipate being a comprehensive two year intensive drill program at the El Cobre project. The results over the past two years have shown the potential for multiple porphyry centres over a five kilometre strike. We look forward to reporting drill results as we move forward.”

The El Cobre project has a total area of approximately 7,000 hectares and is located adjacent to the Gulf of Mexico, about 75 kilometres northwest of the major port city of Veracruz, Mexico in an area of excellent infrastructure. The project is situated 200 metres above sea level with extensive road access and is located less than 10 kilometres from a power plant, highway, gas line and other major infrastructure. Major power lines cross the property area.

The four copper-gold porphyry targets currently known within the El Cobre project, Encinal, El Porvenir, Norte and Villa Rica are defined by distinct Cu-Au soil anomalies, discrete, positive magnetic features and a large IP chargeability anomaly. The largest target area is the Villa Rica Zone and apart from preliminary work in 2017, has never been drill tested in past programs. The targets’ results to date are summarised below and a map is attached.

Encinal Zone: Hole CB5 intersected a highly altered breccia pipe containing fragments of stockwork veining and porphyry mineralisation across which 18.28 metres returned 1.42 g/t Au and 0.10% Cu. The breccia pipe occurs in a large alteration zone, IP chargeability high and magnetics low which has not been tested to depth. On June 19, 2017 Azucar announced that a new area of exposed stockwork quartz veining and gold mineralisation had been identified in the Encinal Zone. On June 29, 2017 Azucar announced the results of initial drilling on this exposed stockwork (Hole EC-17-025) which returned results including 34.47 metres grading 0.73 g/t Au and 0.20% Cu. Azucar is currently following up these results with some additional drilling at Encinal.

The Villa Rica Zone is a roughly 2.5 kilometre by 1 kilometre area of hydrothermal alteration defined also by a strong north-northwest trending magnetic-chargeability high and associated copper-gold soil geochemical anomalies. Past mapping and sampling defined several areas of exposed porphyry mineralisation within the Villa Rica target area including the Raya Tembrillo Zone and the Naranjo Zone, both at the north end of the Villa Rica Zone. Initial drilling in 2017 on the Raya Tembrillo Zone intersected two styles of mineralisation; hypogene copper-gold porphyry mineralisation (115.00 metres of 0.57 g/t gold and 0.27% copper, see press release of November 28, 2017) and near surface exotic enriched copper mineralisation with an apparent tabular distribution (94.00 metres of 1.36% copper; see press release of December 13, 2017).

More information on El Cobre is available on the Azucar website at http://www.azucarminerals.com.

Larry Segerstrom, M.Sc. (Geology), P.Geo., A Director of the Company, is a Qualified Person as defined by National Instrument 43-101 (“NI 43-101”) and has reviewed and approved the contents of this news release. The porphyry mineralisation reported in this news release is associated with broad areas of alteration and stockwork veining. True widths cannot be determined at this time. The analyses reported were carried out at ALS Chemex Laboratories of North Vancouver using industry standard analytical techniques. For gold, samples are first analysed by fire assay and atomic absorption spectroscopy (“AAS”). Samples that return values greater than 10 g/t gold using this technique are then re-analysed by fire assay but with a gravimetric finish. For copper, samples are first analysed by Inductively Coupled Plasma – Atomic Emission Spectroscopy (“ICP-AES”), with four acid digestion. Samples that return values greater than 10000 g/t copper using this technique are then re-analysed by HF-HNO3-HCLO4 digestion with HCL leach and ICP-AES finish.  Blanks, field duplicates and certified standards were inserted into the sample stream as part of Azucar’s quality assurance and control program which complies with National Instrument 43-101 requirements. A NI 43-101 compliant technical report on the El Cobre project entitled, “Technical Report on the El Cobre Property” was filed in May 2015 and can be obtained from www.sedar.com.

Azucar is an exploration company with a mandate to thoroughly explore the El Cobre project in Veracruz, Mexico, an ~7,000 Ha property which covers multiple gold-rich porphyry targets, as demonstrated by recent drilling. Azucar is permitted and funded for active drill campaigns in 2018 and 2019. Azucar holds a 100% interest in the El Cobre project, subject to net smelter returns (“NSR”) royalty interests, assuming production from the property exceeds 10,001 tonnes per day of ore, totaling 2.25% which can be reduced to 2.0% though the payment of US$3.0 million. 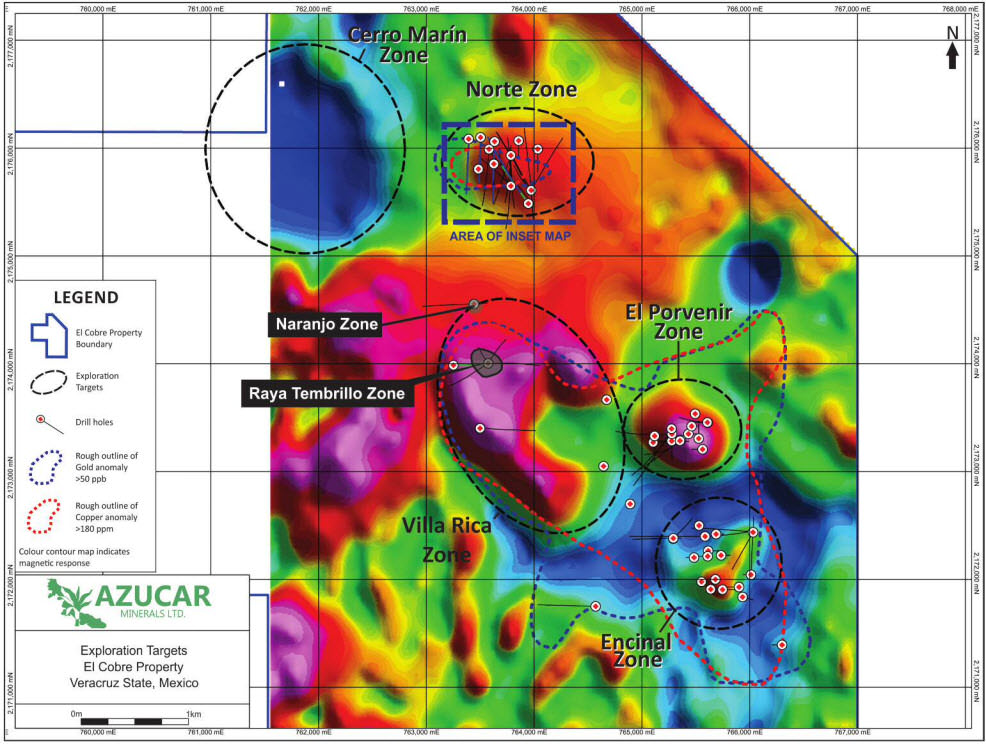 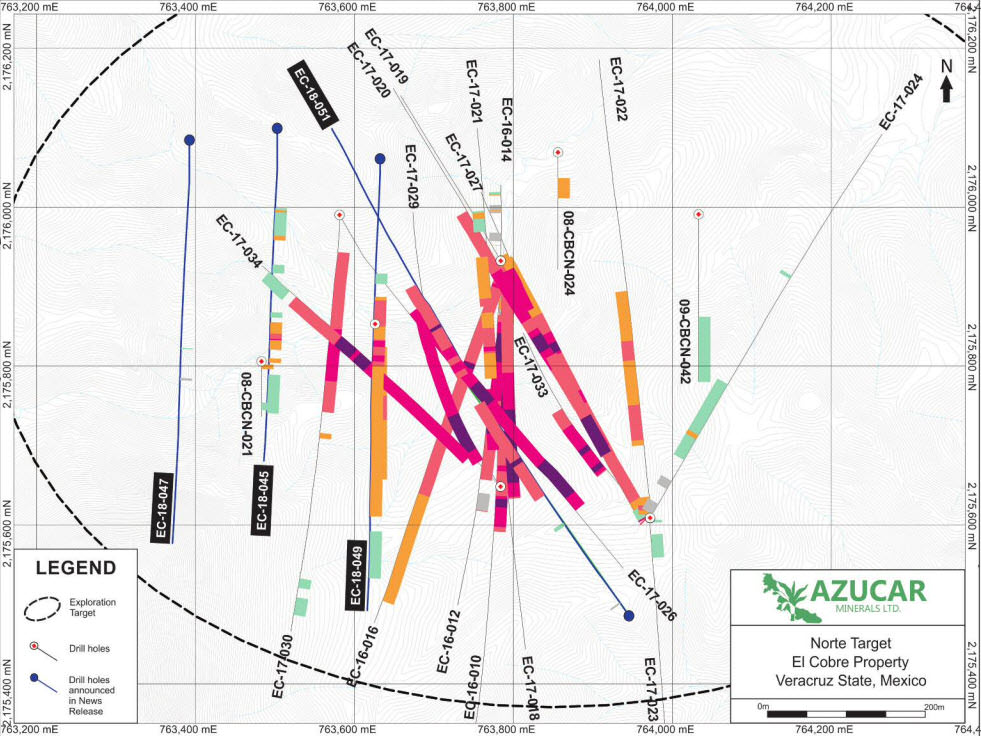 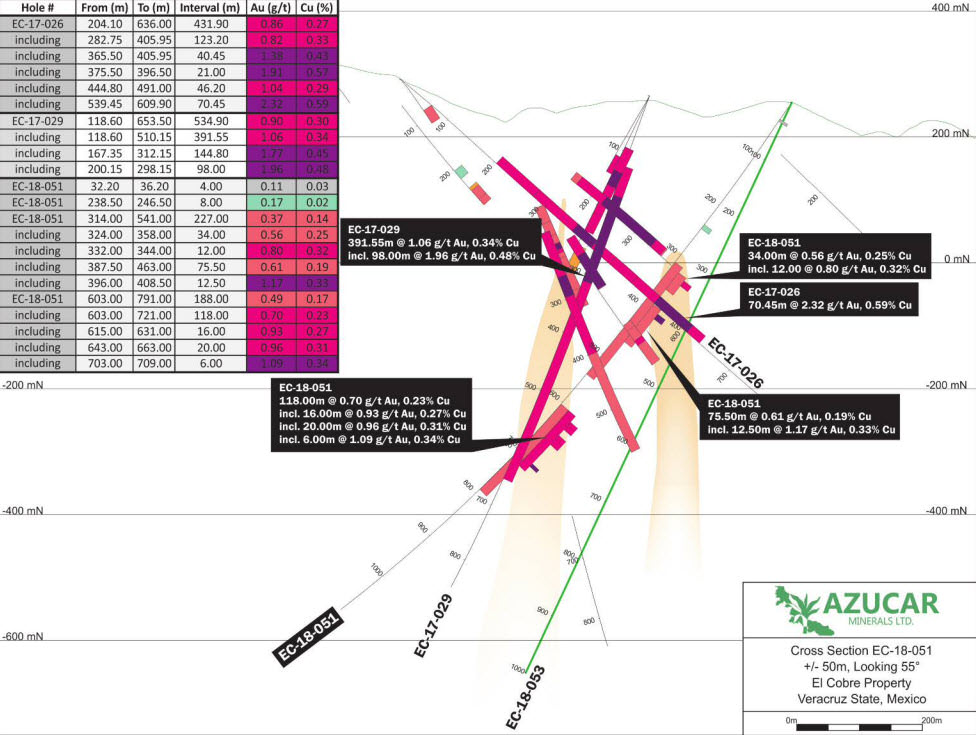 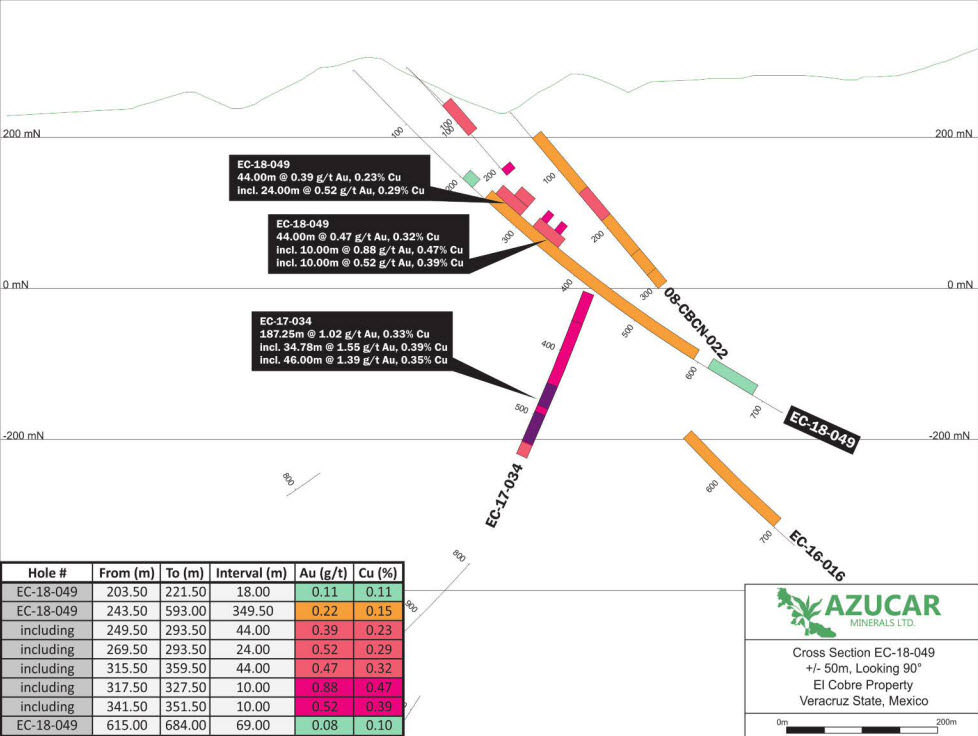 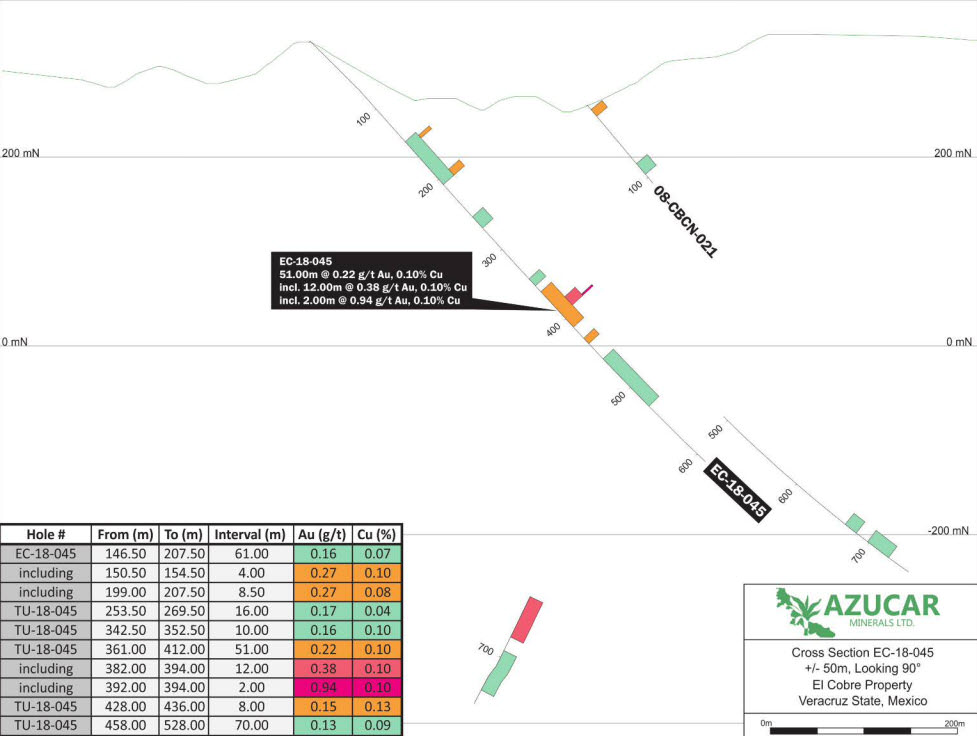