American Executives May Have Faked Deaths in Mexico

The reporter in Mexico who described the purported death of two American executives with a crumbling business said they were likely not killed and he may have been “fed” the story.

Antonio Neri Johnston, a reporter for El Occidental newspaper in Guadalajara, Mexico, wrote a story on Feb. 11, describing that the bodies of Americans Michael Davies and Derald Johnston, identified as the CEO and CFO, respectively, of Southridge Enterprises in Dallas, had been discovered.

Johnston said a man who claimed to be a police officer in a remote village said two bodies were found in a river with documents showing their identities.

“The strange thing is, they called me, but also other colleagues,” Johnston, who could not be reached for comment today, told Dallas ABC affiliate WFAA.

But Johnston said neither local police nor American authorities have evidence of a crime where the bodies were found, nor that the men have been reported missing or even that they existed in the first place.

“We were fed a story, and many of us ran with it,” Johnston told The Dallas Morning News. 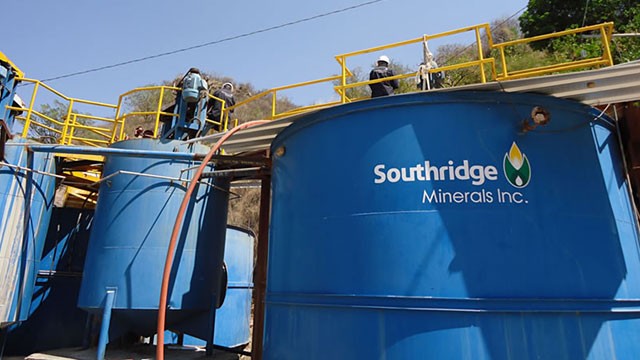 The Securities and Exchange Commission terminated the registration of Southridge Enterprises Inc. in 2011, noting that there were approximately 134 stock “holders of record.” ABC News was not successful in attempts to contact an attorney and law firm once associated with the company, Carrillo Huettel LLP, in San Diego, Calif.

According to one of its press releases on its website, Southridge Minerals announced in November 2012 that it “hired new legal representation” but did not specify which law firm.

Southridge Mineral states that it was in the “development and acquisition of gold and silver mines in Mexico,” but Bandera Gold, a competing company, said Southridge claimed to have business in places in Mexico where none existed.

Starting in early 2012, Southridge began issuing press releases indicating that it had surface rights to Cinco Minas in Jalisco, Mexico, something that caught the attention of Bandera Gold, a gold exploration company in Alberta, Canada, that said it has ownership of the land.

Bandera Gold has been in a legal dispute with its former joint venture partner since 2008 over a $5.6 million agreement to invest in Cinco Minas,

“[Southridge] was claiming a comprehensive drill program and they were intercepting bonanza grades — all of which when we were acutely aware the site was dormant. It has not had activity since late 2007,” said Stephen Roehrig, Bandera’s CEO.

Concerned that Bandera Gold’s shareholders might be confused by the conflicting information, Roehrig said he hired an independent security team to monitor the site and found no evidence of mining activity.

Linda Coker, the tenant relations manager at the Dallas office building of Southridge and Southridge Minerals, told the Dallas Morning News that Southridge does not lease space in the building, though she said the company may have had a temporary or virtual office operation there.

The SEC suspended trading in Southridge stock after the company issued a statement claiming that it had a joint partnership in Mexico with Kinross Gold Corp. of Canada. Kinross told the SEC there was no such deal.

Barksdale to Acquire 100% Ownership of the Sunnyside Project