Almaden Minerals Ltd. (“Almaden” or “the Company”; TSX:AMM; NYSE American:AAU) is pleased to announce new assay results from Almaden’s ongoing exploration and development program at the Company’s Tuligtic project, Mexico.  Today’s results are from the Tano Zone which is located about 1.2 kilometres southwest, along strike from the Main Ixtaca Zone and the 2017 Pre-Feasibility Study (“PFS”) pit. The Tano zone covers an area of exposed volcanic and breccia hosted alteration and elevated gold in soil samples. Previous drilling in this area identified veining and mineralisation. Further interpretation of these past results led to the drilling of the holes released today which now confirm significant mineralisation in this part of the property. There is no drilling between the holes announced today and the PFS pit area, along the 060 Azimuth trend of the Main Ixtaca Zone, and this gap is considered highly prospective. Further drilling in the Tano Zone area is currently underway. Highlights of today’s results include the following intercepts:

J.D. Poliquin, chairman of Almaden stated, “We are very encouraged by these results which are beginning to define a new mineralised zone well outside of the PFS pit and resource area. These results demonstrate the potential for discovery on the project and for the Ixtaca mine plan to grow with continued exploration. Ongoing drilling will continue to seek more such zones even as the engineering work and Feasibility Study progress.”

About the Ixtaca Deposit Feasibility Program

MMTS is an association of Geologists, Engineers and Technicians providing experienced knowledge in Geology, Mine Engineering, and Metallurgical Services and Support to the mining industry for over 15 years. Through their network of associates, they provide an integrated team of experts and QP’s. Services range from early grassroots exploration and development, block model builds, resource and reserve estimates, advanced planning and studies for mine proposals (including operational support), process design and permitting process guidance and support. MMTS has experience working on coal, gold, silver, copper, molybdenum, and tungsten deposits throughout North and South America and around the world. A list of specific projects worked on by MMTS can be found at www.moosemmc.com.

About the Ixtaca Drilling Program and the Ixtaca Zone
The Ixtaca Zone is a blind discovery made by the Company in 2010 on claims staked by the Company. The deposit is an epithermal gold-silver deposit, mostly hosted by veins in carbonate units and crosscutting dykes (“basement rocks”) with a minor component of disseminated mineralisation hosted in overlying volcanic rocks.

The Ixtaca deposit is located in a developed part of Mexico in Puebla State, the location of significant manufacturing investments including Volkswagen and Audi plants. The deposit is accessed by paved road and is roughly 30 kilometres from an industrial park with rail service where significant manufacturers such as Kimberly Clarke have facilities. Any potential mining operation at Ixtaca would be located in an area previously logged or cleared with negligible to no current land usage.

The Company has access to the entire project area and works closely with local officials and residents. The Company has employed roughly 70 people in its exploration program who live local to the Ixtaca deposit. For example, local employees have made up virtually all the drilling staff and have been trained on the job to operate the drill rigs being used at the project. The Company has implemented a comprehensive science based and objective community relations and education program for employees and all local stakeholders to transparently explain the exploration and development program underway as well as the potential impacts and benefits of any possible future mining operation at Ixtaca. The Company regards the local inhabitants to be major stakeholders in the Ixtaca deposit’s future along with the Company’s shareholders. Every effort is being made to create an open and clear dialogue with our stakeholders to ensure that any possible development scenarios that could evolve from the feasibility study work are properly understood and communicated throughout the course of the Company’s exploration and development program. To better explain the impacts of a mining operation at Ixtaca the Company has conducted numerous tours for local residents to third party operated mines in Mexico so that interested individuals can form their own opinions of mining based on first-hand experience. The Company invites all interested parties to visit www.almadenminerals.com to find out more about our community development, education and outreach programs.

On December 12, 2017 Almaden announced the completion of a Social Impact Assessment (“SIA”) of the Ixtaca Project completed by Juan-Pablo Gudiño of GMI Consulting (“GMI”). GMI is a Mexico City-based group which provides social and environmental consulting services to government and industry. In 2015 it was recognized by Consulting Magazine as one of the 50 most important consulting companies in Mexico. The work to complete the SIA was carried out by an interdisciplinary group of nine anthropologists, ethnologists and sociologists graduated from various universities, who lived in community homes within the Focus Area during the study to allow for ethnographic immersion and an appreciation for the local customs and way of life.  The SIA sought voluntary participation from broad, diverse population groups, with specific attention to approximately one thousand persons in the Focus Area. Key points regarding the study include the following:

The Ixtaca gold-silver deposit is largely comprised of zones of abundant high grade epithermal veins with low base metals hosted in barren limestone. Gold and silver in these veins occurs largely as electrum (an alloy of gold and silver) and other leachable sulphides. The boundaries of these vein zones, or swarms, with un-mineralised limestone are well defined both visually and by assay results and are therefore readily modelled for geologic and resource purposes. The many individual veins and veinlets within the vein swarms branch and re-connect, as well as locally change strike and dip, pinch and swell. The wireframe models constructed to define the overall vein zones therefore contain interspersed irregular zones of barren limestone wallrock. This inclusion of limestone dilution in the vein zone wireframes results in average reserve grades of 1.17 g/t AuEq (80.5 g/t AgEq), as reported in the Company’s Pre-Feasibility Study which was filed on SEDAR in May, 2017 (the “PFS”). Nevertheless, the actual occurrence of gold and silver in the limestone hosted Main Ixtaca Zone is in the form of high grade veins and veinlets, not, for example, as widespread low grade disseminated mineralisation. These geologic and mineralogic observations have very positive mining and recovery implications as defined in the PFS released by the Company:

Mr. Norm Dircks, P.Geo., a qualified person (“QP”) under the meaning of NI 43-101, is the QP and project manager of Almaden’s Ixtaca program and reviewed the technical information in this news release.  The analyses reported were carried out at ALS Chemex Laboratories of North Vancouver using industry standard analytical techniques. For gold, samples are first analysed by fire assay and atomic absorption spectroscopy (“AAS”). Samples that return values greater than 10 g/t gold using this technique are then re-analysed by fire assay but with a gravimetric finish. Silver is first analysed by Inductively Coupled Plasma – Atomic Emission Spectroscopy (“ICP-AES”). Samples that return values greater than 100 g/t silver by ICP-AES are then re analysed by HF-HNO3-HCLO4 digestion with HCL leach and ICP-AES finish. Of these samples those that return silver values greater than 1,500 g/t are further analysed by fire assay with a gravimetric finish. Intervals that returned assays below detection were assigned zero values.

Blanks, field duplicates and certified standards were inserted into the sample stream as part of Almaden’s quality assurance and control program which complies with National Instrument 43-101 requirements.

About Almaden
Almaden Minerals Ltd. owns 100% of the Tuligtic project in Puebla State, Mexico, subject to a 2.0% NSR royalty held by Almadex Minerals Limited. Tuligtic covers the Ixtaca Gold-Silver Deposit, which was discovered by Almaden in 2010.

Neither the Toronto Stock Exchange (TSX) nor the NYSE American have reviewed or accepted responsibility for the adequacy or accuracy of the contents of this news release which has been prepared by management. Except for the statements of historical fact contained herein, certain information presented constitutes “forward-looking statements” within the meaning of the United States Private Securities Litigation Reform Act of 1995 and Canadian securities laws. Such forward-looking statements, including but not limited to, those with respect to potential expansion of mineralization, potential size of mineralized zone, and size and timing of exploration and development programs, estimated project capital and other project costs and the timing of submission and receipt and availability of regulatory approvals involve known and unknown risks, uncertainties and other factors which may cause the actual results, performance or achievement of Almaden to be materially different from any future results, performance or achievements expressed or implied by such forward-looking statements. Such factors include, among others, risks related to international operations and joint ventures, the actual results of current exploration activities, conclusions of economic evaluations, uncertainty in the estimation of mineral resources, changes in project parameters as plans continue to be refined, environmental risks and hazards, increased infrastructure and/or operating costs, labour and employment matters, and government regulation and permitting requirements as well as those factors discussed in the section entitled “Risk Factors” in Almaden’s Annual Information form and Almaden’s latest Form 20-F on file with the United States Securities and Exchange Commission in Washington, D.C. Although Almaden has attempted to identify important factors that could cause actual results to differ materially, there may be other factors that cause results not to be as anticipated, estimated or intended. There can be no assurance that such statements will prove to be accurate as actual results and future events could differ materially from those anticipated in such statements. Almaden disclaims any intention or obligation to update or revise any forward-looking statements, whether as a result of new information, future events or otherwise, other than as required pursuant to applicable securities laws. Accordingly, readers should not place undue reliance on forward-looking statements. 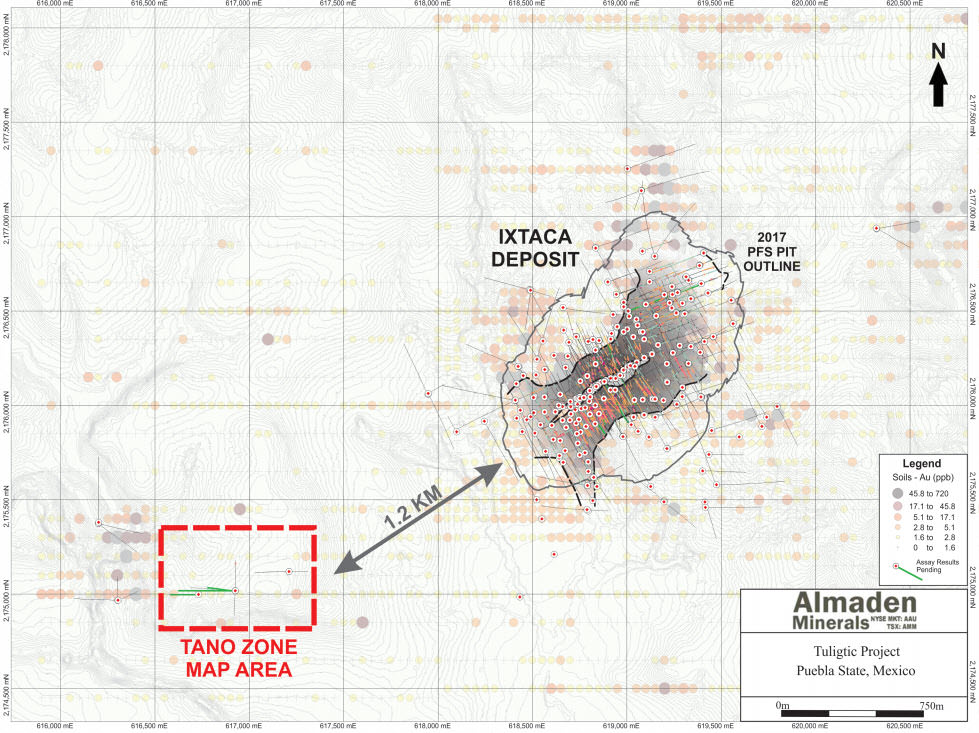 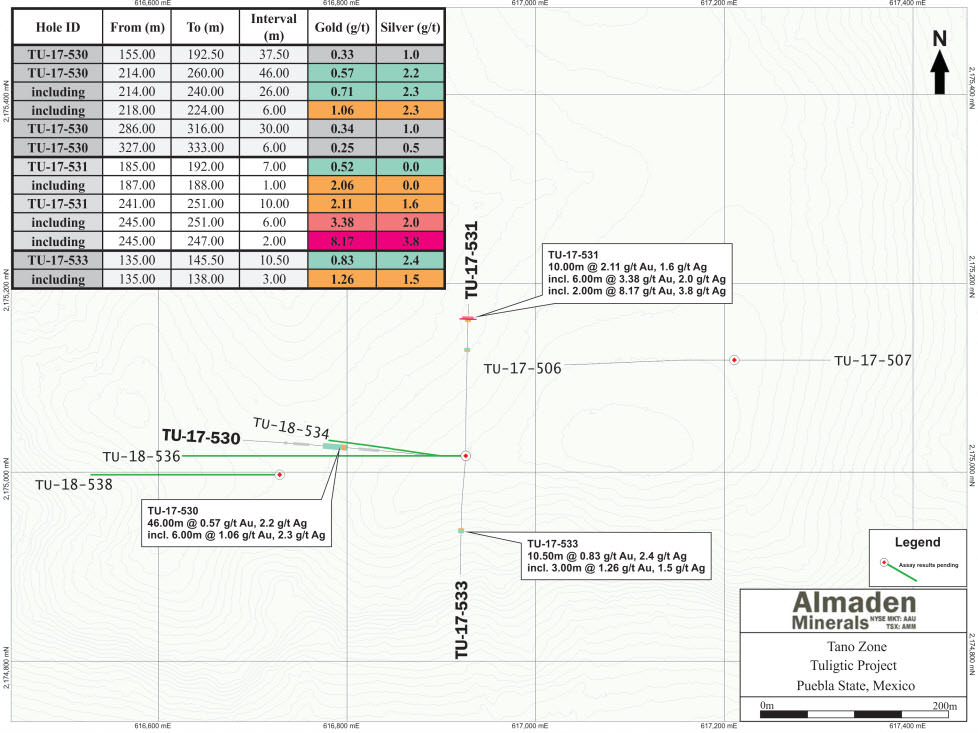